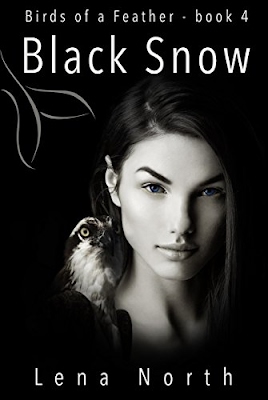 Snow’s best friend is a bird. An osprey, to be specific.
Everyone knows Snow’s parents died a long time ago, and she has perfected her happy smile and girly giggle so no one suspects that she hides a darker side of herself deep inside. No one, except her bird – and Nick, who always seems to know how she feels.

Things are not what they seem on the Islands, though, and when Snow has been shot at, almost drowned and fallen through the roof of a cave, she starts thinking about her life, and her past.
Then she suddenly finds herself in a situation where she has a tough choice to make. Will she follow her heart or the pull from her family and friends? And will she ever find peace with her past?
Black Snow is the fourth book in the Birds of a Feather series, a young adult/coming of age series with paranormal elements, full of laughter, mystery, and romance.

Other Books in the Birds of a Feather Series

Wilder
Birds of a Feather, Book 1
Publisher: FAB Publishing
Release Date: December 14, 2016
Wilder’s wonderful grandfather is dead, and so is her mother, but Grandpa Willy gives her one final gift in his will – the knowledge that her father is only her step-father.
Once she meets Hawker, the scary man who turns out to be her real dad, her life takes an unexpected turn. She finds out about a heritage she never knew she had, and secrets from the past are uncovered as she fights to save her part of the world from destruction.
And then there’s Mac, with his green eyes and a soft voice that flows through her like sweet honey. He’s there to help Wilder when she needs it the most, and as she struggles with how to fit into the group of people around her dad – having Mac in her life becomes more important with every bad thing that happens.
“Wilder” is the first in the Birds of a Feather series and a spin-off from the Dreughan trilogy. It’s set in modern time and can be read stand-alone.

Jiminella “Jinx” Sweetwater is a genius. She’s a scholar, an inventor, hardworking and loyal, and well known in the scientific circles around the University in Prosper City.
Being smarter than everyone else might seem like a good thing, but it isn’t. At least, it isn’t to Jinx who has two friends, a small condo, and no life.
After a fight with her best friend Wilder, it just gets worse. Someone breaks into her home and when her parents show up in all their hippie-like glory, Jinx has had enough and escapes to a small village by the sea.
Suddenly, Jinx finds herself involved in village life, living with the unpleasant Mrs. Fratinelli and trying her best to juggle all the things that seem to end up on her plate. And then there’s calm, cool and gorgeous Dante – Snow’s boyfriend, who seems to see right through the shields Jinx has put up around herself, straight into her mind.

Life just keeps slapping Mary in the face.
She had it rough growing up, and when it finally looks like she’s getting her life firmly back on track, breaking up with her boyfriend starts a string of events that threatens to bring Mary to her knees.
Fortunately, there are good people in her life who will do everything in their powers to help her when she needs it. Mary’s girlfriends, Jinx and Wilder are there for her, and after she’s rescued from being kidnapped, Carson and Bo take her into their home, becoming the family she always wanted but never seemed to get to keep.
As the group around Hawker Johns hunt the men who wanted to trade Mary for the valuable crystal from the mountains, she slowly recovers. Then life throws her another few curveballs, and it looks like she’ll lose everything yet again.
Mary is resilient and used to restarting her life from nothing, but when it looks like she’ll also lose the man she loves, maybe the happy girl has just had enough?
Picture this is the third book in the Birds of a Feather series, a young adult/coming of age series with paranormal elements, full of laughter, mystery, and romance.

I found the ledge, and it was barely wide enough for my toes so I couldn’t stand on it for long. The arm holding me up started to burn, and I looked around frantically for somewhere to go.
“Snow,” my bird said. “Big rock. Have to jump, one arm’s length to the right, one head up.”
I looked and thought I saw the outline of the overhang she was talking about. The rock had hit my shoulder, but the numbness had subsided, and I clenched the hand a few times. It seemed to be working. Then my left foot slipped, and for a few seconds, I thought I’d fall, but I managed to hold on and find the ledge with both my feet again.
“Almost there,” Nick said.
Was he crazy? He was coming up right underneath me, something that was against all common sense.
“Get out of the way, Nick,” I repeated. “If I fall I’ll crash right into you.”
He didn’t stop, and my body was screaming at me to do something, so I made up my mind. Then I made sure my safety rope was loose enough, bent my knees as much as I could, tightened all my muscles, and jumped straight into the darkness.
My hands gripped the overhang firmly, and I held on.
“Twist legs right. Another rock,” the osprey said calmly.
I did, and felt my knee hit a rock, bent the leg upward and over it, and heaved myself up over the edge.
“I’m secure,” I called out to Nick and was met with a resounding silence. “Nicky?” I shouted.
He couldn’t have fallen because I would have heard, so why wasn’t he answering?
“Good,” he suddenly rumbled out of nowhere. “Is there an anchor there somewhere?”
My hands slid along the cold, hard rock and found another rusty piece of metal. I yanked it a few times, and it seemed to be safe, so I secured my rope to it.
“Yeah,” I said. “Do you want my rope?
“Yeah,” he echoed.
The overhang was big enough for both of us to sit on. I leaned my back against the mountainside and tilted my head a little to nudge his broad shoulder.
“That was fun,” I murmured.
He snorted out something unintelligible, and I giggled. It wasn’t my fake giggle, it was a real one, from happiness and adrenaline.

Another way would be to use my imagination and then I would be a super powerful warrior woman, think Xena the warrior princess (though with less tacky clothes). Or when I think of it, maybe I’m actually more of a Hercule Poirot (sans the suit and moustache). Or maybe I’m like Aragorn, strong and cool and then I might get to meet Gandalf! Or I could be Bella’s pretty cousin and snap Jacob up in a second (yeah, I’m so not team Edward), or wait, maybe I could be like one of them heroines in historical novels who swoon all the time. I’ve always wanted to swoon…

Well, I guess you get how my mind is working (or not working, some say).
Anyways, I like to write. Stories, adventures, romantic and happy stuff mixed up with sorrow and hardship, and bit of laughter here and there because the way I see it – life is way too short to go around feeling grumpy.