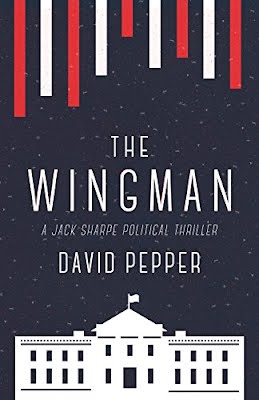 In The Wingman, veteran Midwestern reporter Jack Sharpe has made it big thanks to the deep-rooted voter-fraud conspiracy he uncovered in The People’s House (the first of the series). At his new perch at Republic, one of America’s flashiest and fastest growing news networks, life is good—until it’s not. Following his beat reporter’s gut, he catches a whiff something rotten is taking place in the Democratic Presidential primary, and ultimately discovers an elaborate scheme to put a corrupt and dangerous politician in the nation’s highest office by any means necessary. Dark money, drone technology, paramilitary government contractors, neglected veterans, kompromat—we see these issues in the news every day. But in The Wingman David Pepper shows that if shadowy entities with enough incentive and resources were to connect and exploit these issues, the American people would be largely powerless to stop them. Jack must risk his life and reputation to get to the bottom of the story before the disturbing plot he and his team have uncovered becomes reality.

Early Praise for The Wingman:

“Another tour de force…Like The People’s House, I loved this book.  Pepper is a phenomenal writer, with great dialogue, intricate plot, subplots, and characters.  And with his unique perch, Pepper deftly wraps the real issues and frustrations of modern-day politics into captivating story lines.  I can hardly wait for the next one.” —Jennifer Granholm, former Governor, Michigan

“Pepper does it again! Believable and entertaining—just like the real news these days. What’s fake and what’s real?” —Jack Markell, former Governor, Delaware

“The Wingman by David Pepper takes readers on a rollicking ride…There are the kinds of surprises readers long for and characters they will remember long after the last page is turned.

Well-researched and beautifully crafted, The Wingman is a thrilling read, a story that brilliantly depicts the political atmosphere leading up to the primaries….The characters are superbly conceived and developed to appear like people in real life….David Pepper is a master storyteller.…”

The Wingman by David Pepper is an exceptional political thriller…The book is well-written, interesting and, above all, suspenseful, and is therefore recommended to any reader, not just fans of political thrillers.”   —Readers’ Favorites, Reviews

Other Books in the Jack Sharpe Series:

It doesn't take long to discover why the Wall Street Journal crowned "The People's House" the "sleeper for political thriller of the year," or why a former Governor said she almost missed her connecting flight because she couldn't put it down.

Youngstown political reporter Jack Sharpe is logging time at the tail end of a disappointing career -- jaded about politics and stung by personal hard knocks in a struggling part of Ohio. But after an odd election result in the Ohio Congressional district he covers, Sharpe stumbles across voting irregularities that spur him to dig deeper. The story takes him far beyond his corner of Ohio as he discovers an international plot that strikes at the heart of American democracy. His reporting leads to a showdown with a philandering Congressman and Presidential contender, and an eccentric but deadly Russian mogul. In order to save himself and the country, Sharpe must rekindle his old fire to navigate a treacherous journey through danger, betrayal, and atonement.

And yes, it was all written before eerily similar events occurred in the 2016 election.

That’s when I noticed. With the cameras still pulled back to the wider shot, and the studio audience sitting well behind me, my guess was that I was the only one seeing it.

They widened, then darted ever so slightly.

Then he looked at me. Directly. Impatiently. In a way no one else could have seen.

His words may have been moving, his delivery powerful. But those eyes told the real story—they always did. As my high school coach had drilled into me as a young quarterback, “It’s all about your eyes, Jack. The best players are watching your eyes, and if you’re not careful, they’ll betray you every time.” I’d long ago learned that Coach’s lesson applied way beyond football. A man could mouth whatever words he wanted, lie or tell the truth. He could smile or frown, gesture wildly or sit perfectly still. But his eyes told the real story. If he wasn’t careful, and if you paid attention, the eyes told all.

Now, Bravo’s eyes signaled that something was off. Discomfort, at a time when discomfort made no sense. Maybe it was a painful memory. Or maybe something about the story was not quite right. Or maybe there was more to it. Whatever it was, Bravo wanted to change topics.

And since he had saved my debut, I returned the favor, moving onto the final question of the night. But because of those eyes, I also jotted down a simple reminder on the notepad in front of me: “Check out Bravo war story.”

David Pepper has served as Chairman of the Ohio Democratic Party since January 2015. He was first elected to public office in 2001 when he served on the Cincinnati City Council, and was reelected for a second term in 2003. In 2006 he was elected to the three-member Hamilton County Commission, serving there from 2007-2010. David earned his B.A. from Yale, and later his J.D. from Yale Law School. In 1999, he clerked for the Honorable Nathaniel Jones of the United States Court of Appeals for the Sixth Circuit. He also has taught election and voting rights law at the University of Cincinnati College of Law. Born and raised in Cincinnati, David is a fifth-generation Cincinnatian. He and his wife Alana have two sons, Jack, 3, and Charlie, 1.