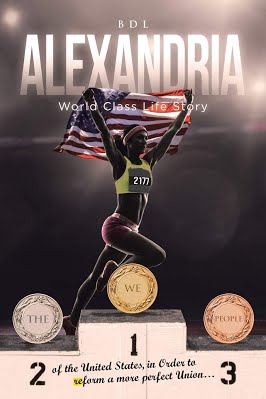 Her biggest victory came at the finish line, but her greatest triumph was the End Game. Ruth is a legendary runner of the late twenty-first century whose biography inspires a dynamic political rebellion in a dystopic Judeo-Christophobic America. Her incredible World Class Life Story is paralleled by a quest to salvage her beloved nation from annihilation. But, she must first find a way to embolden a new generation of patriots to make a stand.

Alexandria ambitiously explores what happens in this type of society. Will this be the end of America? And freedom? Are you ready to see how this provocative epic tale unfolds? So get set. Get ready. And gear up for the spellbinding dramatic “End Game”.

"Alexandria: World Class Life Story by BDL is a narrative with powerful religious and political themes and a conflict that is phenomenal. . .In this novel, the author makes a powerful prophecy: the US might be headed for doom if it continues to drift away from the religious convictions of its founding fathers." -Divine Zape-Readers' Favorite - 5 Stars

"The prose is elegant, the voice upbeat, and the author's unique way with words is one of the interesting things that make the narrative very enjoyable.  Alexandria: World Class Life Story is an inspiring story beautifully told, purpose-driven, and with a message that addresses the ills of contemporary American society." -Romuald Dzemo-Readers' Favorite - 5 Stars

"Author BDL writes well on the over-arching themes of the tale, from political discussions to riots, resistance and the power of celebrity as an influence in today's world. . . Overall, Alexandria: World Class Life Story is a challenging but rewarding political read." -K.C. Finn-Readers' Favorite - 5 Stars

Chapter 1—Section: The Spring of Grace

THE YEAR 2156, A YEAR Ruth never imagined she’d ever see. One of realizing the sixth year of her centenarian status. The year she was to reach her 106th birthday and accordingly had heard from the Lord in recent months regarding the end of her life. She knew that she didn’t have many years left and as a special favor, he’d given her the heads up to make preparations. A final “get your house in order” sort of deal. After much prayer and careful deliberation by Ruth, God revealed that he was going to grant her requests to see her next grandbaby, who was expected by her great-grandson, Quin, and his wife, Anna Winkler. In line with that promise, prayer also revealed something else just as important to Ruth—she needed to spend her last years writing her official biography. In all her years, it was definitely an anomaly to have not done so by then. . . So being led to write about her life changed something that’s normally done for self-memorialization into an ordained task that was steeped in the necessity for passing down legacy and inheritance to the following generations. A directive for reasons not yet fully disclosed to Ruth initially but would undoubtedly fit into a master . . . agenda.

Being alive for over a century amounted to a lot of life lessons learned over the years. While Ruth didn’t comprehend every detail of those plans for writing her life story, she discerned that it may not have had anything at all to do with her. But instead maybe everything to do with something or someone else. Or maybe even perhaps more far reaching than any single individual. And that’s exactly what occurred to her a few days prior as she sat down for breakfast one morning. While watching the news, there was an endless cycle of headlines that framed the political climate of the nation and the rest of the world . . .

POTUS Daniel Stuart led off the news on that morning as he embarked upon a six-continent tour . . . in order to mark his second term in office. One would think that he must’ve been a quite popular president to be reelected and that certainly had a ring of truth to it. But the question waged on as to whom was he popular with? Well in short order, not with those from the Jewish-Christian heritage. For POTUS Stuart wasted no time in fulfilling campaign promises which made many of his supporters very happy. No doubt . . . he was the golden boy to those groups of American citizens and, apparently, the majority as well because again he was elected to the highest office twice.

So one could imagine how happy the masses were when he banned. . .

. . . According to the EO, those policies were a means of safeguarding non-believing employees as a protected class under federal EEOC laws (Employer Equal Opportunity Commission) and furthermore prevented overall hostile working environments for all personnel employed, appointed, and elected into the federal service. Just as well, those standards were also adopted by many private employers and such polices were implemented by them to uphold those practices locally. But ironically this standard didn’t seem to apply to . . . There were even incidents of people being fired for saying “bless you” to sneezing co-workers. However, to say “curse you” instead was permissible as revealed in a court transcript where the issue was litigated. According to the legal scholars, the latter had absolutely no religious connotation to it unlike the former. Needless to say, the defendant’s doom was sealed by a credible witness who observed the encounter and attested to the facts under oath. As a result, the defendant’s removal was upheld and was required to pay punitive damages and court costs.

Such laws were extremely technical in structure. So much so that those in opposition felt the ever-tightening noose of government intrusion upon individual freedoms and thereby found them overburdening and overreaching. But unfortunately, those in that particular group were a small minority as compared to the majority . . . citizens. For this reason, violations were punishable by administrative, civil, and sometimes criminal sanctions such as job removal, punitive fines, and prosecution respectively. The White House Christmas Tree was done away with and he successfully led the charge to eliminate God from The Pledge of Allegiance. At his inauguration POTUS Stuart used the constitution of a non-religious freedom organization when sworn in instead of the Bible, Torah, or other similar book regarded as holy and sacred. And though initiated by previous administrations, this president was believed to play a key role in the destabilization of American . . .

Certainly, Ruth was not a fan of POTUS Stuart.

*Her greatest victory wasn’t at the finish line, it was way more important. One icon. One purpose. A contribution to the ultimate fate of her beloved nation. Read more of Alexandria: World Class Life Story. 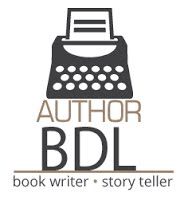 BDL is a proud American from the Southeast, who wrote this story to finally have a say. To create and control the outcome of some grand narrative. BDL had a blast writing this epic story and hopes that you will find it entertaining.