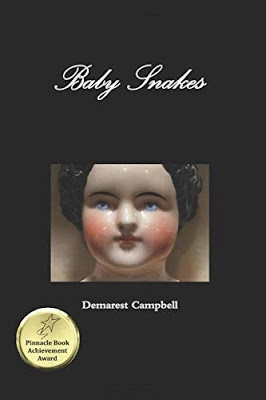 Winner of the 2019 PINNACLE ACHIEVEMENT AWARD for Literary Fiction.

In turn-of-the-Century Calcutta, Police Medical Examiner, Dr. E.B. Charron, feels protective of Delia, the Bohemian, meddlesome, only legitimate child of the aristocratic Moran family who might be more than merely harmlessly eccentric. An incipient alcoholic widow with a small, poisonous stepson, Delia maintains subversive relationships among the demimonde and infuriates her oddly possessive maid.

Praise for Baby Snakes:
“Baby Snakes is an original take on the Raj, full of wry humor, strong characters, and evocative descriptions that linger. Full-bodied characters and a darkly comedic narrative voice combine in Demarest Campbell’s Baby Snakes, a historical novel in which Brits behave badly under the Raj…Descriptions of people and locales blend dark humor with undercurrents of openhearted empathy and reach near-brilliant concision…”~ Foreword CLARION REVIEW

“Campbell’s darkly humorous historical novel follows the iconoclastic life of Cordelia Moran in 19th-century Calcutta. These well-drawn, decidedly British characters spend their steamy days in India in erudite, witty repartee… An elegant examination of the people and mores of a particular time and place in the history of the British Empire; perfect for anglophiles.” ~ KIRKUS REVIEW


Born in New York City, raised in India and Europe, Demarest Campbell is a middle-aged Anglo-sapiens who was born on the wrong continent. Mostly harmless. She speaks Franglais, Latin, and British English. Both sides of her family have a four-hundred year history in India as tea planters, and shippers, and in the military.