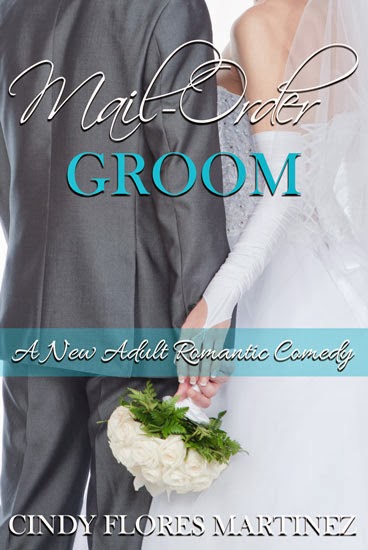 Lisa is about to marry her first real love and have the wedding of her dreams, but her world is shattered when she finds her fiancé, Jeff, in the arms of another woman. When he calls the wedding off, Lisa is heartbroken, but her heartache turns to anger when she sees him in town the next day with the other woman.

In a momentary lapse of reason, Lisa decides to marry another man at the wedding. She finds Krzysztof Zielinski from on Mail-Order-Grooms.Com. He needs to marry an American woman so that he can stay in America, and he’s willing to pay money for it, but his reason for needing to stay is what tugs at Lisa’s heart and convinces her to say “I do” to him. Besides, green card marriages are easy, right? They’re short-lived and not real. She won’t even have to live with him. And marrying another man would be the perfect revenge on Jeff.

Lisa races to the altar with her stand-in groom, but she struggles with the guilt of deceiving her parents and facing her confused wedding guests. And then she learns that she does have to live with Krzysztof. She wakes up the next morning hoping it was all just a bad dream.

How will she handle the dilemma she has gotten herself into? Will she be able to make things right in the end?


Daphne was waiting for me as I raced down the sidewalk on Main Street through the bustling morning crowd. I had called her right as she was about to dial my parents number and tell them that the wedding was canceled, and I asked her to meet me there instead. I had picked myself up off my bed, my body rising as if from the ashes. My demeanor had gone from the deepest, darkest hopelessness to a light flickering upon my newly made up face.

Daphne watched me in disbelief as I approached. “Tell me you are not serious about this.”

“I’m dead serious.” I rushed past her without stopping.

“But he’s a total stranger!”

I was on my way to meet Krzysztof Zielinski from Mail-Order-Grooms.Com, and I was going to ask him to marry me. Crazy? Yes. Insane? Irrational? Unbelievable? It was all of those things and more, but my mind was made up.

Daphne joined me. “Why are you doing this?”

“Because I have to. If Jeff doesn’t want me, or this wedding, then I’m going to show up with a man who does.”

She scoffed. “You can’t be serious.”

“You said your friend married a man to help him get a green card, and she only had to see him at the wedding and at the interview at the immigration office. I’m going to do the same thing myself.”

Daphne swerved around a passerby. “But your situation is different than hers. You have a lot of people in your life who know you. How are you going to explain this to them? What are you going to tell your parents?”

“I’m going to say that I fell in love with Krzysztof and that I want to marry him instead of Jeff.”

She guffawed. “They’re not going to believe that!”

“I’ll make them believe it.”

I couldn’t see why she was acting as if it was so impossible. I didn’t think it would be too hard to convince anyone after they saw how Krzysztof looked, and wait until I told them he liked baking and writing poetry. “Aren’t you the one who wanted to marry Josecito what’s his name?” I flung my arm in the air.

“Only after I got to know him and if things worked out. I never would have done it this soon. Will you please stop and think about what you’re doing?”

“I have thought about it.”

The delicious aroma of baking bread permeated the air as we approached the Polish bakery where Krzysztof worked. I stopped a few feet away from the entrance. “Daphne, will you please go along with this for me? Please.”

About the Author
Cindy Flores Martinez

My name is Cindy Flores Martinez. I was born and raised in a suburb of Los Angeles. I have an MFA in Creative Writing with an emphasis in Screenwriting. I have been a screenwriting instructor, screenplay consultant, script reader, and screenplay collaborator.  My debut novel, Mail-Order Groom, which was inspired by my own Polish ancestry, started out as a screenplay and movie project. I spent years shopping it around Hollywood, New York, and other parts of the world and had two well-known actors, one of them Academy Award nominated, interested in portraying the lead character’s parents. After not finding the success I wanted, I officially canceled my film production company in November of 2009 and embarked on the journey of turning my screenplay into a novel.