Tour Kick Off: Releasing the Demons by @ld_rose #giveaway 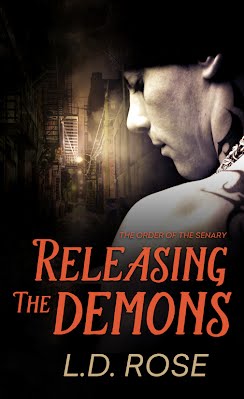 Blaze Knight has been through hell and back, but the nightmares aren't over yet.
Five years after Blaze was maimed by Cyrus Chimola, a powerful vampire with a penchant for torture, he’s still trying to pick up the pieces of his shattered life. As a genetically engineered mercenary with the ability to bend fire to his will and to see in infrared, Blaze’s mission is to protect what’s left of humanity. When Chimola and his crew return to the Bronx gunning for Blaze’s blood, Blaze is forced to face the demons of his past. Hell-bent on revenge, he seeks the help of Valerie Medeiros, an NYPD detective who manages to steal his heart and save his life in more ways than one.
Motivated by her sister’s gruesome death, Valerie has made it her life’s goal to bury every vampire in the ground where they belong. When she brings in Blaze Knight for suspected murder, she discovers he’s not only innocent, he isn't a man at all—he's a half-vampire hybrid working with a band of brothers for the U.S. military. Valerie has a hard time trusting anything with fangs, yet she quickly falls headlong into Blaze’s life, a life full of darkness and horror she can’t even begin to fathom. The bodies are stacking up, but Valerie can’t seem to let go of this hybrid, a beautiful monster filled with pain, rage, and passion unlike anything she's ever known.
In a world where the line between good and evil is blurred, Blaze and Valerie will find danger at every turn, risking everything they’ve come to know and love, including one another.

#1 – Do You See Writing as a Career?
Yes, of course! One of two for me. :) This may sound crazy, but I didn’t start taking writing seriously until I went to medical school. Don’t get me wrong, I love being a doctor, but I’ve been a writer my entire life and I always wanted to see my work published some day. Being in medicine and watching people become sick (and sometimes die) on a near daily basis made me realize if I wanted to achieve my goal of publishing a novel, I shouldn’t wait. I should go for it, no matter how busy or crazy life is, because who knows what could happen tomorrow? Many patients I took care of voiced so many regrets while they lay on their deathbed and it really got to me. Don’t put off your dreams or one day you may not have a chance to achieve them.

#2 – What was the Hardest Part of Your Writing Process?
Editing is pretty tough for me. I get so hung up on words and phrases and I’ll literally stare at a paragraph for fifteen minutes and be like “hmm” and end up changing absolutely nothing. I guess that’s what I need an editor for. :P

#3 – Did you have any One Person Who Helped You Out with Your Writing Outside of Your Family?
I joined a wonderful writing group (the CoLoNY chapter of the RWA) who were super welcoming and very supportive. I give them all the credit for encouraging me to get out there and submit my manuscript to publishers.

#4 – What is next for your writing?
I finished the first draft of BLACK BULLET, the second book in the Order of the Senary series, and it’s currently undergoing revision. The third book in the series, BEAUTIFUL LIAR, is also underway. I actually wrote a good chunk of the third book before the second, but I decided it fit best as number three. They’re all so very different, with BLACK BULLET approaching even darker subject matter than RtD while BEAUTIFUL LIAR borders on erotica and a bone-deep desire for something you can’t have.

#5 – Do you have an addiction to reading as well as writing? If so, what are you currently reading?
I LOVE to read! How can a writer not love reading? I’m currently making my way through MARK OF THE DEMON by Diana Rowland. I’m really enjoying it so far. :D

DESCRIBE Your Book in 1 Tweet:
Blaze is out to set the world on fire and Valerie is the only one who can tame him. Will she pull him from the brink or fall into his dark past?

#4 – Comedy or Drama?
Drama. Don’t get me wrong, I love me some comedy, but I’m far more engaged in the dramatic.

#6 – Fantasy or Reality?
Both. I like to inject a little fantasy into my reality. ;)

#7 – Call or Text?
I’m ashamed of saying this, but text. It’s just easier to get your message across without small talk. It’s also situation dependent. Some things are worth a phone call.

#8 – Public School or Home School?
Public school. You got to get out there and meet people! Others teach you about who you are and who you want to be (or don’t want to be). But I’m biased, since I went to public school my whole life.

#10 – eBook or Paperback?
Also situation dependent, but eBook is much easier and efficient for me since I can read anywhere anytime. Otherwise I wouldn’t get nearly as much reading done!

L.D. Rose is a neurotic physician by day, crazed writer by night, and all around wannabe superhero. She writes paranormal romance and urban fantasy, but she’s been known to delve into horror, sci-fi, and medical suspense on occasion. L.D. Rose is a member of the RWA, FF&P, NEC-RWA and CoLoNY. She currently lives in Rhode Island with her studly hubby, her hyperactive boxer, and her two devious cats.