Tour Kick Off: Confessions of a Paris Party Girl by @vickilesage #giveaway 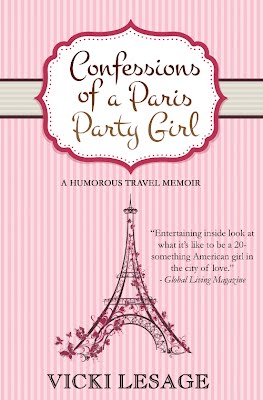 When newly-single party girl Vicki moved to Paris, she was hoping to indulge in wine, stuff her face with croissants, and fall in love. It proved to be much moredifficile than she'd imagined. In this laugh-out-loud memoir, this cheeky storyteller recounts the highs and lows of her life in the City of Light. Sassy and shamefully honest, Vicki makes you feel as if you're right there in Paris stumbling along the cobblestones with her.

Will she find love? Will she learn to consume reasonable amounts of alcohol? Will the French administration ever cut her a break?

Amazon bestselling author Vicki Lesage proves daily that raising two French kids isn't as easy as the hype lets on. In her three minutes of spare time per week, she writes, sips bubbly, and prepares for the impending zombie apocalypse. She lives in Paris with her French husband, rambunctious son, and charming daughter, all of whom mercifully don't laugh when she says "au revoir." She penned the Paris Confessions series in between diaper changes and wine refills. She writes about the ups and downs of life in the City of Light at VickiLesage.com.