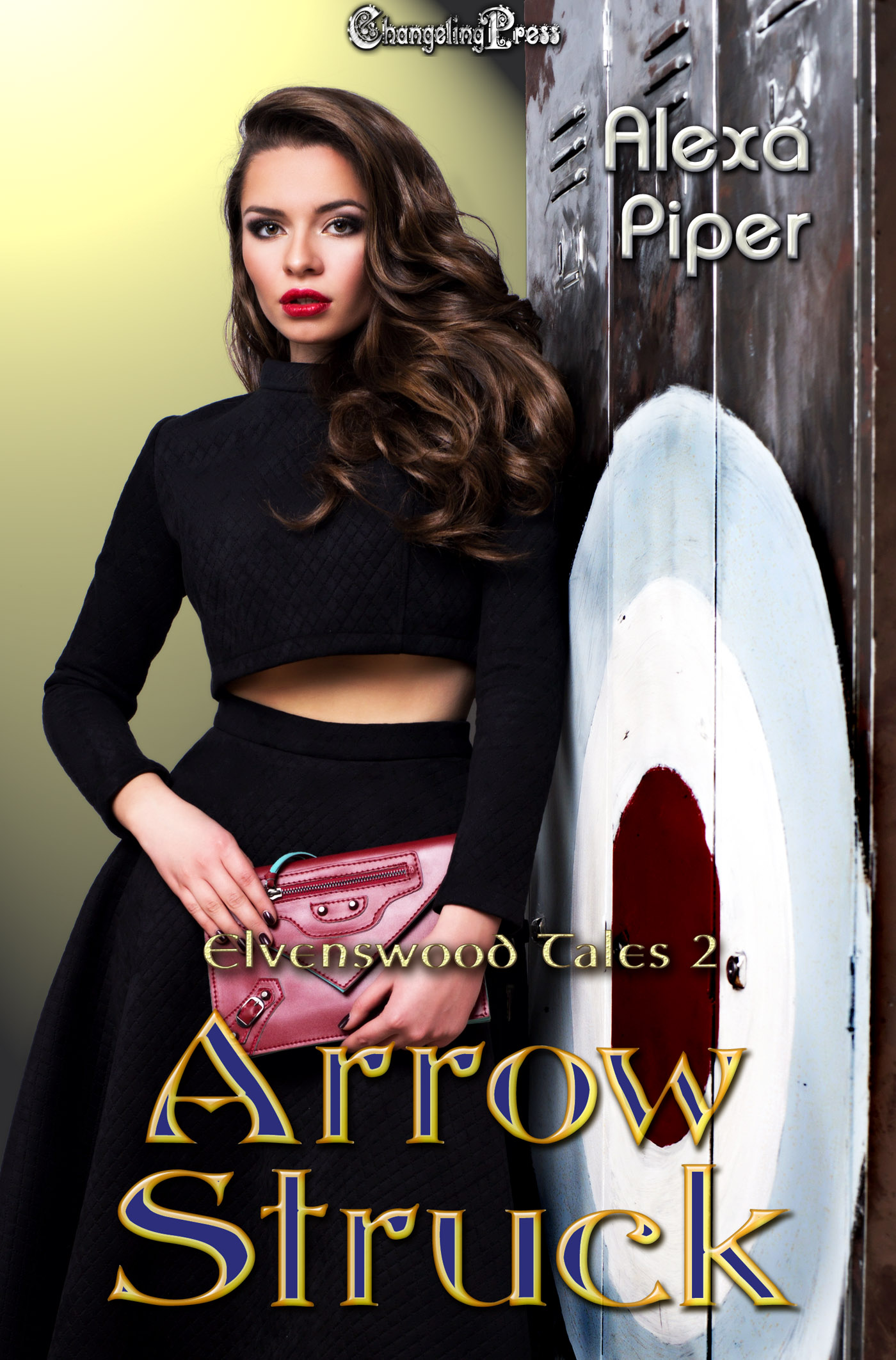 Laurette is the luckiest Elf in all of New Elvenswood. His longtime friend the vampire Hugo and the human non-witch Charlie are both in love with Laurette, and he’s in love with them. Everything would be perfect if only those two would finally decide to move in with Laurette, quit their jobs, and spend all their time with him. And Laurette has plans to sway his lovers’ minds on Valentine’s Day.

Charlie finds herself tightly suspended between the attentions of one hot Elf and one hot vampire, and there is no place she would rather be. And then, a colleague decides he wants to claim Charlie, whether she’s in a relationship or not.

Enter Cupid, mistress of arrows and bringer of love, because loving the right person is especially important with spring warming hungry hearts… except not everyone agrees with the accuracy of Cupid’s aim.

The kitchen smelled wonderful, a cacophony of vanilla and cinnamon and chocolate. Yet Laurette had to admit that it looked more like an entrenched warzone with the large, centermost kitchen island being occupied by the freshly iced cakes on one side and by neat lines of cookies cooling on their racks on the other. What Laurette didn’t have to admit was that he was stress baking.

He turned his back on the kitchen island and faced the bain-marie in front of him where luscious chunks of chocolate were melting to velvety softness.

“Gertrude!” Laurette barked. “Bring some of the cakes into one of the sitting rooms. I need the space. And send Heinrich to go out and get more candy hearts.” Wait. I can make heart-shaped pralines. With a touch of insta-lust magic in the filling. “And marzipan! I am making pralines.”

“Milord, there are cakes in the sitting rooms already.” Gertrude had marched up to his elbow, her pointy hat just reaching up to the middle of Laurette’s upper arm. She was finally wearing the Valentine’s Day outfit Laurette had chosen for his pixie servants this year, a warm, raspberry pink with a tasteful line of darker hearts along the neck- and hemlines. They all looked wonderful in it.

“Well, I am not done baking yet, Gertrude. Find someplace to put the cakes.” And I need more berries. Well. I cannot head to Faerie to pick berries before I do a test batch of the pralines. Why do the high holidays have to be so stressful if all you want to do is charm your lovers? And why do my lovers have to be so difficult! “And send Kris out for more gold leaf. Tell them to get double what they did last time, and cane sugar as well.”

While having two lovers and caring for them certainly turned Laurette’s days -- and his nights -- less leisurely, he wouldn’t want to change any of that. Hugo was a prize he had sought for so long, but while it was just the two of them, the stubborn vampire humanist with the time consuming hobby of tending to people’s medical needs, had never crossed that borderline of friendship.

It had taken for Hugo to find Charlie and properly fall for the human non-witch born to a witch family to finally burn that border to ashes and make Laurette -- Hugo’s closest Elven friend -- into more than just a friend. And Charlie herself was dazzling in her own ways, her tastes contrasting Laurette’s, sometimes to his frustration when she wouldn’t let him tame her messy bun into something a little more sculpted, sometimes to his delight when she kissed Laurette as if she needed him like air or water.

Yet, she too was following her own hobbyist pursuits, heaping her attention on old manuscripts in the University Library’s archives. Laurette had never grown to like the building, and imagining Charlie there did strike an odd chord with his sensibilities. He would have much rather built her a nicer library to consume her days. Ideally, however, Laurette’s human lover would see the benefit in focusing on creating words and books to hold them rather than tending to the writings of others. I hope I can convince her of that, he thought.

Gertrude took three slow breaths, which pulled Laurette from his thoughts. “Would it be possible to send one or two of the cakes to the library? Perhaps milady would enjoy sharing them with her colleagues.”

Laurette stirred the chocolate. Ah, ready to pour over the pomegranate cookies like hot wax over a bare thigh. “That is actually not a bad idea. I need to write a card to go with the cake if we are sending it to Charlie at work.” If I get her to finally move in here, I need to make sure she gets regular flower deliveries to the office too so she doesn’t think me complacent. In fact, I should just switch to regular flower deliveries for her, period. “I should try making blood pralines to send Hugo, lest my silly vampire feels I single Charlie out with my doting.” I would send him flowers as well, but he’ll complain his delicate patients cannot tolerate the pollen or some silliness.

“You do dote on her a lot,” Gertrude pointed out.

Laurette turned to face the cookies with the melted chocolate, ready to do some drizzling. “Of course I do. The darling is human still, because Dr. Hugo has morals or some such thing. Get Dinner in here for some bloodletting and see if we have a suitable card while you prepare the cake for the library. The champagne and peach, I think.” The cookies looked appealing with the chocolate still warm and dripping off the edges. I’d like to have Charlie here to taste them so that I can taste the chocolate off her lips after. But this loneliness is what I get for picking lovers with hobbies. They called it work, of course, but that did little to change the facts. “We are packing some of these cookies as well, Gertrude.”

“Of course we are,” the pixie said. Then she finally went to find a suitable card and pass along his orders to the others. Dinner, the Fae who served as Hugo’s blood source while the vampire was spending more time at Laurette’s house, could be heard groaning when Gertrude informed him his blood was wanted in the kitchen. Dinner was not the most voluntary of blood sources.

It was a little over a week till Valentine’s Day, and Laurette was uncertain it was enough time to finish his preparations. After all, his ultimate goal was to sway at least one of his lovers to end their silly living arrangements and move into his house, and everything just had to be perfect for that. Alexa Piper writes steamy romance that ranges from light to dark, from straight to queer. She’s also a coffee addict. She loves writing series, and her Fairview Chronicles follow a ragtag gang of supernaturals who try to make their city safer. Mostly. Her second series, Dusk & Dawn, explores banter and the trappings of a world in which Vampires, Werewolves, and the Fae live alongside humans. Elvenswood Tales is a new series that expands the Fairview universe.