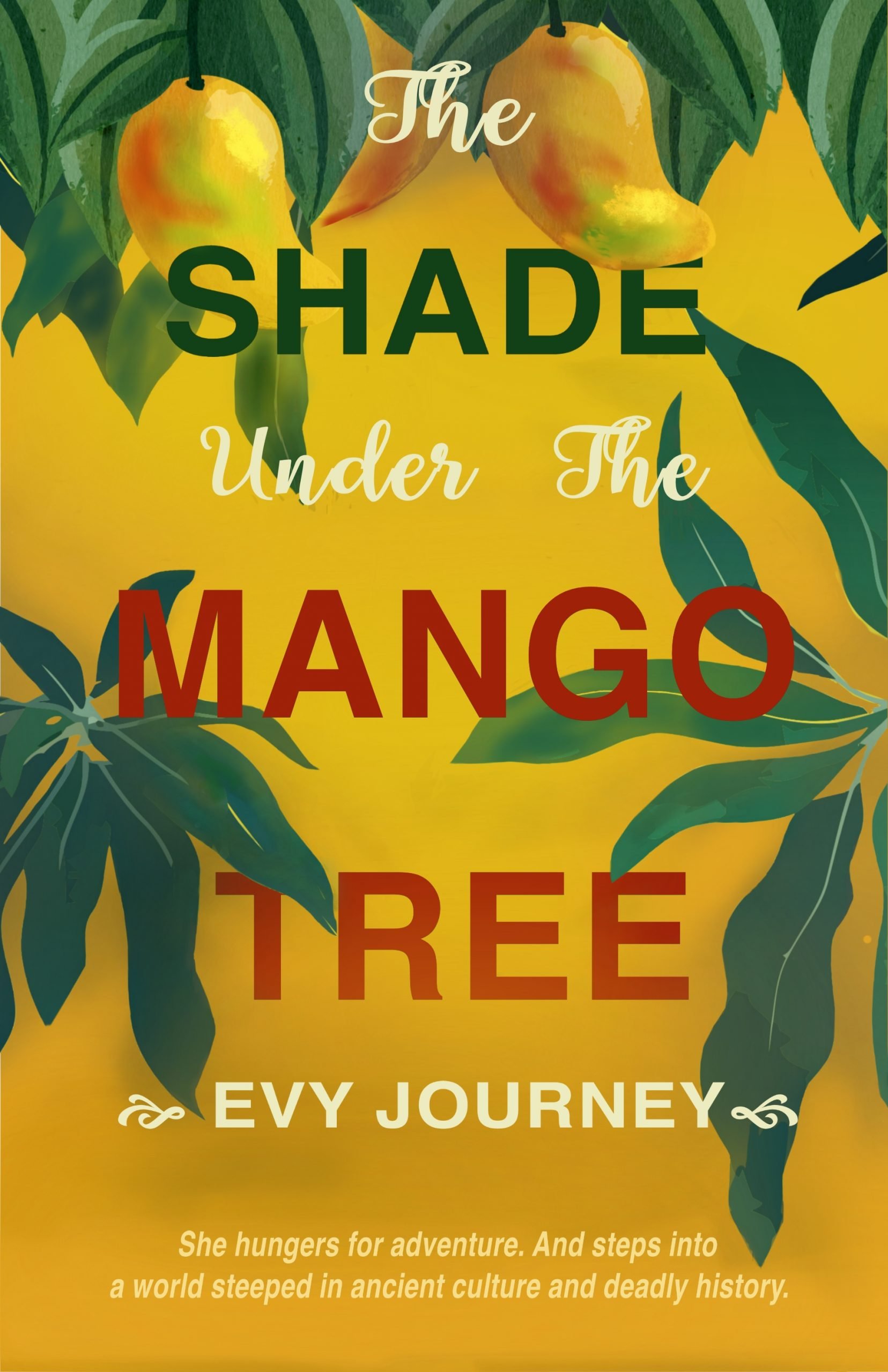 After two heartbreaking losses, Luna wants adventure. Something and somewhere very different from the affluent, sheltered home where she grew up. An adventure in which she can make some difference.

Lucien, a worldly, well-traveled young architect, finds a stranger’s journal at a café. He has qualms and pangs of guilt about reading it. But they don’t stop him. His decision to go on reading changes his life.

Months later, they meet at a bookstore. Fascinated by his stories and adventurous spirit, Luna goes to a rice-growing village in a country steeped in an ancient culture and a deadly history. What she finds there defies anything she could have imagined. Will she leave this world unscathed?

An epistolary tale of courage, resilience, and the bonds that bring diverse people together.

Praise for The Shade Under The Mango Tree:

"A dazzling, globe-spanning tale. In a beautiful way, the story explores how powerful connections can be born at a distance. The storyline is rich, with authentic emotional struggles and believable relationships. Throughout, simple, evocative language and bold descriptions are intermingled with flashes of poetic imagery. Aided by strong thematic undertones, subtle symbolism, high stakes and an ultimately hopeful narrative voice, Evy Journey has delivered a captivating story." -- Self-Publishing Review

"...one of the most beautiful books I've read in a long time. Emotive, gripping and sweeping... a tale I will remember for a long time." -- International Review of Books

"... a beautifully-written, marvelous story of two people discovering their emotions and learning to trust each other." -- San Francisco Book Review

"... a tender and captivating story that delves into the many existential questions we ask ourselves frequently... with a nuanced understanding of different cultures backed by a worldly sensibility of travel, poetry, and design. The prose reads like a painting adding depth and complexity, making for some beautiful imagery." -- Reedsy Discovery

"This emotional story, with its clear prose and crisp dialogue, will appeal to those who enjoy romantic literature and are not afraid to engage with the ugliness of the real world. Journey's three-dimensional, well-developed characters carry this appealing story of building new bonds in the midst of loss and heartache. Great for fans of: Nora Roberts, Nicholas Sparks." -- Booklife Review 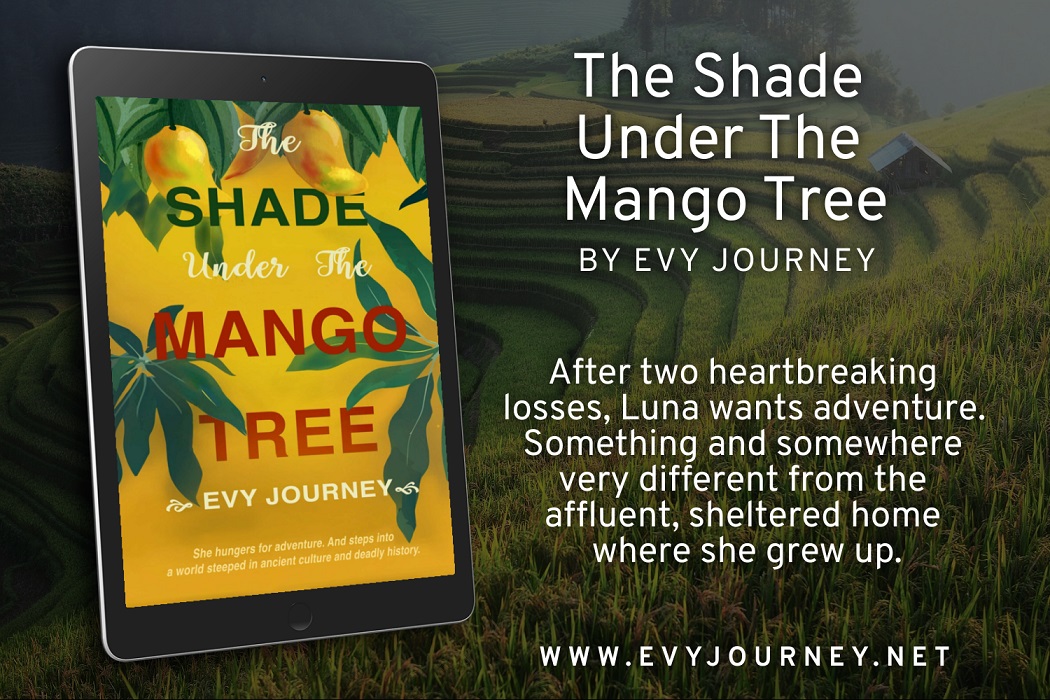 Ov’s thin upper body is slumped over his crossed legs, his forehead resting on the platform. His brown, wiry arms lie limp, the right one extended forward, hand dangling over the edge of the platform. Dried blood is splattered on his head, and on the collar, right shoulder, and back of his old short-sleeved white shirt.

It seems fitting that he died where he used to spend most of his time when he wasn’t on the rice fields—sitting on a corner of the bamboo platform in the ceiling-high open space under the house. It’s where you get refreshing breezes most afternoons, after a long day of work.

The policeman looks down at Ov’s body as if he’s unsure what to do next. He lays down his camera and the gun in a plastic bag at one end of the platform untainted by splatters of gelled blood.

He steps closer to the body, anchors himself with one knee on top of the platform, and bends over the body. Hooking his arms underneath Ov’s shoulders and upper arms, he pulls the body up, and carefully lays it on its back. He straightens the legs.

He steps off the platform. Stands still for a few seconds to catch his breath. He turns to us and says, “It’s clear what has happened. I have all the pictures I need.”

He points to his camera, maybe to make sure we understand. We have watched him in silence, three zombies still in shock. Me, standing across the bamboo platform from him. Mae and Jorani sitting, tense and quiet, on the hammock to my left.

Is that it? Done already? I want to ask him: Will he have the body taken away for an autopsy? I suppose that’s what is routinely done everywhere in cases like this. But I don’t know enough Khmer.

As if he sensed my unspoken question, he glances at me. A quick glance that comes with a frown. He seems perplexed and chooses to ignore me.

He addresses the three of us, like a captain addressing his troop. “You can clean up.”

The lingering frown on his brow softens into sympathy. He’s gazing at Jorani, whose mournful eyes remain downcast. He looks away and turns toward Mae.

Pressing his hands together, he bows to her. A deeper one than the first he gave her when she and Jorani arrived.

He utters Khmer words too many and too fast for me to understand. From the furrowed brow and the look in his eyes, I assume they are words of sympathy. He bows a third time, and turns to go back to where he placed the gun and camera. He picks them up and walks away.

For a moment or two, I stare at the figure of the policeman walking away. Then I turn to Jorani. Call him back. Don’t we have questions? I can ask and you can translate, if you prefer. But seeing her and Mae sitting as still and silent as rocks, hands on their laps, and eyes glazed as if to block out what’s in front of them, the words get trapped in my brain. Their bodies, rigid just moments before, have gone slack, as if to say: What else can anyone do? What’s done cannot be undone. All that’s left is to clean up, as the policeman said. Get on with our lives.

My gaze wanders again toward the receding figure of the policeman on the dirt road, the plastic bag with the gun dangling in his right hand. Does it really matter how Cambodian police handles Ov’s suicide? I witnessed it. I know the facts. And didn’t I read a while back how Buddhism frowns upon violations on the human body? The family might object against cutting up Ov—the way I’ve seen on TV crime shows—just to declare with certainty what caused his death.

I take in a long breath. I have done all I can and must defer to Cambodian beliefs and customs.

But I can’t let it go yet. Ov chose to end his life in a violent way and I’m curious: Do the agonies of his last moments show on his face? I steal another look.

All I could gather, from where I stand, is life has definitely gone out of every part of him. His eyes are closed and immobile. The tic on his inanimate cheeks hasn’t left a trace. The tic that many times was the only way I could tell he had feelings. Feelings he tried to control or hide. Now, his face is just an expressionless brown mask. Maybe everyone really has a spirit, a soul that rises out of the body when one dies, leaving a mansize mass of clay.

I stare at Ov’s body, lying in a darkened, dried pool of his own blood, bits of his skull and brain scattered next to his feet where his head had been. At that moment, it hits me that this would be the image of Ov I will always remember. I shudder.

My legs begin to buckle underneath me and I turn around, regretting that last look. With outstretched hands, I take a step toward the hammock. Jorani rises to grab my hands, and she helps me sit down next to Mae.

Could I ever forget? Could Mae and Jorani? Would the image of Ov in a pool of blood linger in their memories like it would in mine?

I know I could never tell my parents what happened here this afternoon. But could I tell Lucien?

The terrible shock of watching someone, in whose home I found a family, fire a gun to his head? And the almost as horrifying realization—looking back—that I knew what he was going to do, but I hesitated for a few seconds to stop him. 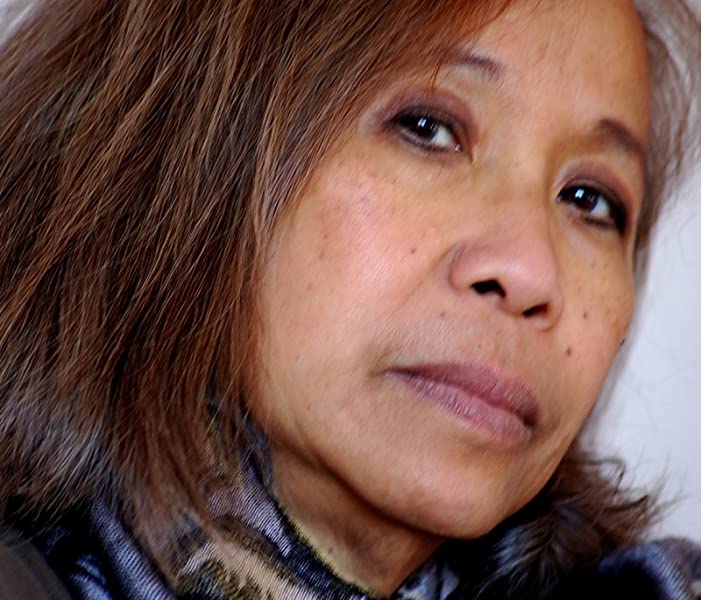 Evy studied psychology (M.A., University of Hawaii; Ph.D. University of Illinois). So her fiction spins tales about nuanced characters dealing with contemporary life issues and problems. She believes in love and its many faces.

Her one ungranted wish: To live in Paris where art is everywhere and people have honed aimless roaming to an art form. She has visited and stayed a few months at a time.