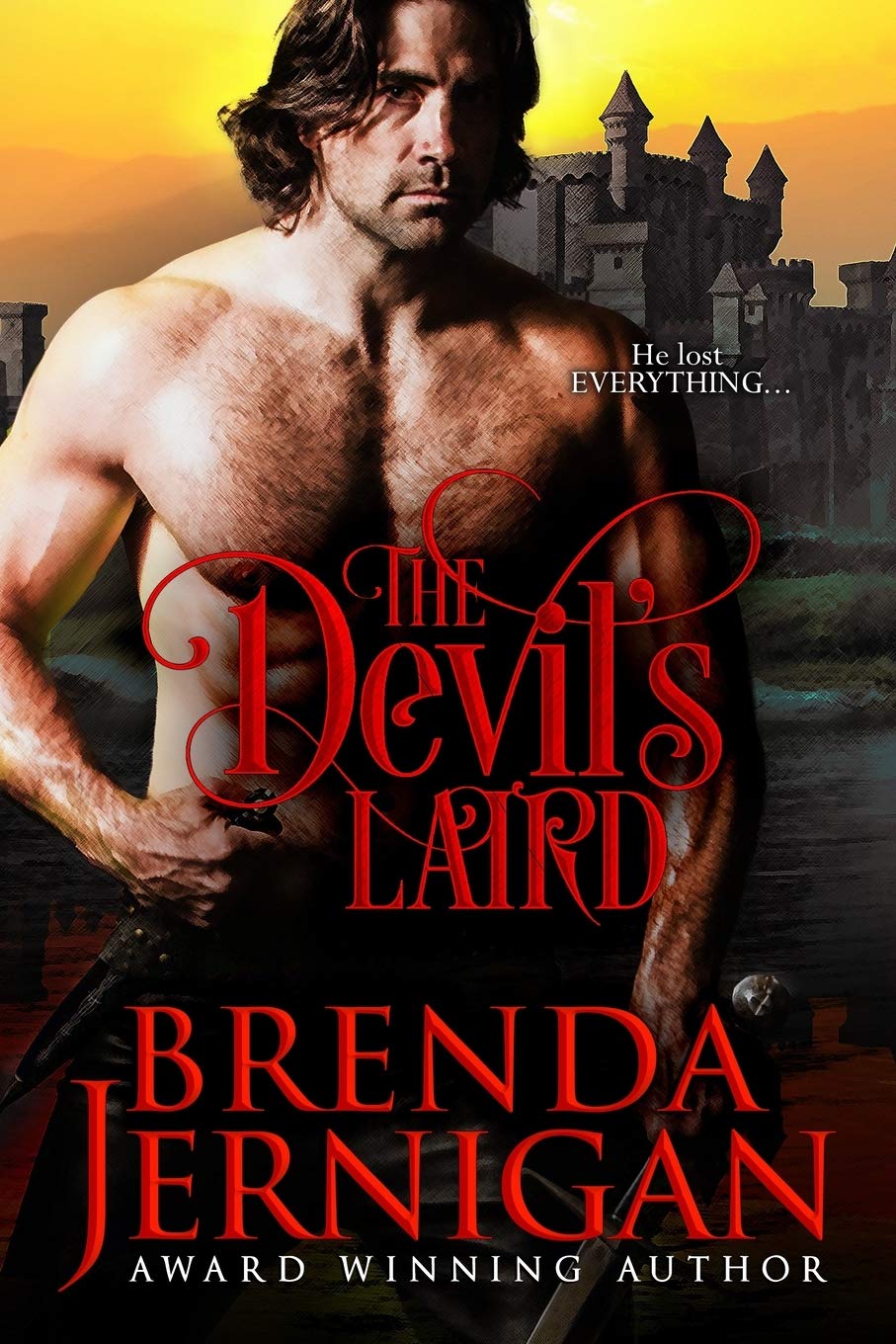 As Lady Siena stands on a platform waiting to die, she realizes that she has been doomed from the day she was born. She doesn’t believe she is worth anything, much less love. Her own people believe she is cursed. Siena’s only true blessing is the gift of sight.

Roderick, Warlord of Kirkurd, is driven by revenge and guilt. When his holding was attacked, his wife ravished and slain, and his son missing, the goodness within Roderick died. He is now known as the Devil’s Laird.

Roderick saves Siena from the hangman’s noose and takes her back to his castle. Siena sees a lonely, haunted man who needs her. But no matter how hard she tries, she cannot completely break down the barrier Roderick has constructed around his heart, nor shake the curse of bad luck that his people believe she carries. Only the Holy Grail can prove if she is good or evil.

When Siena sacrifices herself to free Roderick’s son, Roderick realizes that he has lost his chance to love again. Now he will move heaven and earth to find her before it is too late. 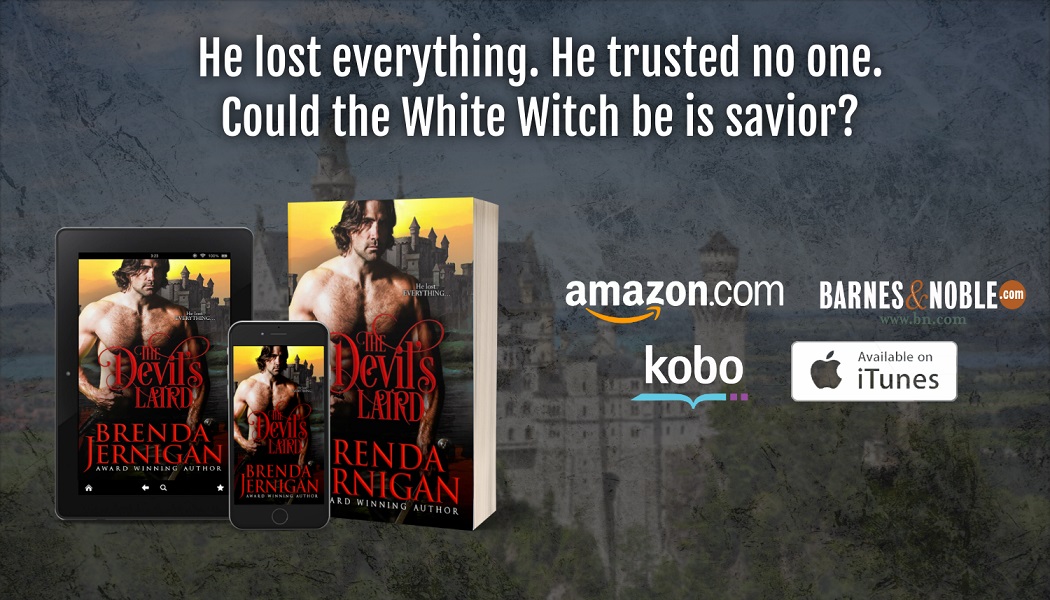 The woman squirmed and struck him several times until he wrapped his arms tighter around her, pinning her arms against her sides. His patience had worn thin. “Och, get still or I swear, lass, I’ll toss ye on the ground myself.”

Roderick realized that the woman had no idea who he was, so he took a calming breath. “I’ll no hurt ye, lass. I’m not one of yer brother’s men. Stop fightin’ me.” Roderick saw uncertainty in one wild, blue eye as the other was swollen. “I’m the one who pulled ye from the hangman’s noose.” Patience wasn’t something he possessed in great quantities and this slip of a girl was trying his patience greatly.

“For Christ’s sake, lass. If I had wanted to harm ye, I’d have left ye to dangle from the end of a rope,” he said, frustrated. “And I’m beginnin’ to doubt the mercy I’ve shown ye.” This woman was going to be more trouble than she was worth, he’d wager. “I’ll loosen my grip if ye will hold still.”

He glared down at her and in a stern voice said, “I’ll have yer promise now.”

Agatha rode up beside them and laid a weathered hand gently on Siena’s arm. “Milady, he is helping us. It will be all right.”

“Nay. He has on warpaint and that is the reason he is blue, milady,” Agatha explained.

At long last the girl relaxed at the sight of her maid, then croaked, “Some water, please.”

“In a minute,” Roderick told her.

Warily, Siena watched the warrior who held her, wondering how she’d gotten in this position when she should have been dangling at the end of a rope.

She remembered seeing a man on a black horse coming through the crowd just before the stool had been shoved out from beneath her feet. She thought it had been the Devil come to claim her, then she recalled her breath leaving her body, and she shuddered at the memory. By the grace of God, she’d been spared. Yet she felt her neck and found it tender to the touch. Apparently, this man had saved her. Now that everything was over, she felt his strong arms around her, and found it comforting. She had no idea why she should feel this way when men had always been trouble in her past.

The intimidating warrior was huge, and his dark eyes were penetrating. She couldn’t help feeling as though he was trying to see deep inside her when he looked at her, but at the moment he wasn’t paying her any attention. “Water,” she rasped again. Her throat was so parched it felt like it was on fire.

At last, the man nodded and nudged his mount over to a clearing in the middle of oak trees. The dead leaves on the ground would provide a good cushion for their tired bodies when they slept.

The sun was lowering, giving a dusky glow the clearing. Only then did Siena notice that there were five other men with them, and they were dismounting too. Who were these strangers? And why had this man saved her? Thankfully, she didn’t recognize any of them. Of course, it was hard to get past their blue painted faces. They would scare the hell out of anyone.

Amazon All-Star author, Brenda Jernigan is a bestselling author. She writes both contemporary and historical novels. She has been nominated for several awards – Book Seller’s Best Award, The Maggie Award, The Holt Medallion Award and a RONE Award.

She grew up as a tomboy and really had no use for books. It wasn’t until she was taking her son to Story Hour at the local library that the librarian gave her a copy of DEVIL’S DESIRE by Laurie McBain. After that Brenda became hooked on historicals. Brenda’s first book, THE DUKE’S LADY, was bought and published by Kensington Publishing and her career as a storyteller took off.

“As usual her characters are interesting, her plot action-packed, and her love story filled with conflict and emotion. A great read from a talented writer.” Rendezvous Magazine.

“The characters had me hooked from the beginning. This book touched my heart and will definitely be one of my recommends for May.” -Cindi Streicher – Waldenbooks, RWA Bookseller of the Year 2002

Brenda loves to hear from readers.