Tour Kick Off: Deceptive by @DeceptiveSeries 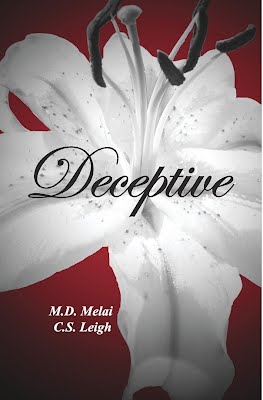 Twenty-one year old Liliana Dapprima was living her life exactly how she planned. She had an amazing job as an interior designer and lived with her best friend Violet in Toronto. But, everything changes when her father forces her to move to New Jersey to re-design his businesses in New York City. Upon her arrival in New Jersey, she finds out she must live with her old flame, Emilio Amante, who had completely tore apart her heart.
She must learn to live alongside Emilio as she tries to start a new relationship with the new man in her life, Lucas. And to make matters even more complicated, Emilio is Lucas’ boss.
Dealing with a love triangle is hard enough, but then Lily must also deal with secrets from and about her family. She is constantly lied to and when she gets attacked multiple times by a rival family, she wants answers and will go to any extent to get them.
Liliana has been living in a world where everyone and everything is not what it seems.
What will happen when tragedy strikes and secrets are revealed?

#1 – Do You See Writing as a Career? Of course we would love for it to be, and we are hoping one day that it might be, but for now we do it for the love of writing.

#2 – What was the Hardest Part of Your Writing Process? The hardest part for us, as co-authors, was making sure the reader couldn’t tell the difference between our writing. We both would write certain chapters, and we both have different writing styles, so making sure everything came together cohesively was tough.

#3 – Did you have any One Person Who Helped You Out with Your Writing Outside of Your Family? Yes, we had a friend named Patsy. She read the first thirteen chapters of Deceptive, before it was Deceptive, and she encouraged us to finish it. Patsy gave us advice along the way, helped point out holes in the story, and taught us a better way to evaluate it.

#4 – What is next for your writing? Right now, we are writing the final book in the Deceptive Series. It’s estimated to be released winter 2016. We are super excited to have the entire series come together and finish Liliana’s journey. After we finish the Deceptive Series, we plan to write solo for a while.

#5 – Do you have an addiction to reading as well as writing? If so, what are you currently reading? Yes we both have major addictions to reading as well as writing. Melai is notorious for reading when she is supposed to be writing, and sometimes Leigh has to get her back on track. Currently, Melai is reading The Consolation Duet by Corinne Michaels, and Leigh is reading The Slater Brothers series by L.A. Casey

DESCRIBE Your Book in 1 Tweet: Liliana is living in a world where everyone & everything is not what it seems. What will happen when tragedy strikes & secrets are revealed?

M.D. Melai & C.S. Leigh are a cousin writing duo that live in North Central Texas.They are the self-published authors of the Deceptive Series. Deceptive, the first in the series, was published in February of this year. Fugitive, the second in the series, was published in July. They are currently hard at work writing the third book in the series that is slated to be released in the Winter of 2016.
C.S. Leigh has a degree in business administration. When she isn’t writing she is working her day job, that she enjoys as well. Leigh loves being adventurous and shopping.

M.D. Melai is a full time stay at home mom. When she isn’t writing she is chasing around her very active five year old.

Both Melai and Leigh believe family is of the utmost importance and enjoy spending their free time with them, as well as friends. They are both devout readers, and read as much as time will allow them too.

Their love for books and storytelling is what inspired them to tell the story of Liliana.