Tour Kick Off: Riot of Storm and Smoke by @jenellision 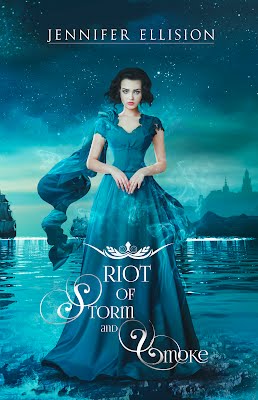 War draws closer, like a tide to the shore.

Bree and her friends have escaped the clutches of the Egrian King, but their troubles are far from over. Still reeling from the secrets that drew new breath when her father took his last, Bree sets off for the safety of Nereidium-- the kingdom she's just learned is hers.
But with the King's ire at its peak and war a certainty, Nereidium is no longer safe. As Prince Caden rallies the Egrian people against his tyrant father, Bree, Princess Aleta, and Tregle race to the Nereid shore to warn them of the incoming danger—and to put the Nereid Princess on the throne.
The only trouble there: Bree can’t bring herself to reveal that the Princess is her.
It’s not a dilemma she can waste time pondering. With a new weapon in his arsenal, the King's strikes are sure to be bolder than ever before. And Bree may not be ready to wear a crown… but she won't let her kingdom down without a fight.

For me, I absolutely see writing as a career. Creating characters and letting their voices and stories unfurl is an incredible experience, but delivering the story that I know I’m capable of— crafting and polishing it until it shines— is work.

Oh, drafting is the hardest part for me, without a doubt. Up until now all of my books have been “pantsed.” That is, written without an outline. So not only am I trying to stay with the characters as I write, but while drafting, I’m also trying to figure out what the story is. That’s why revisions are my favorite part of the process. It’s easier to add or delete content as needed when I already know where the story is going to take me.

They say it takes a village to raise a child, and they might as well say the same thing about books.

Yes, my family was wonderful and supportive in regard to my decision to pursue a career as an author, but the people who were instrumental in getting Threats of Sky and Sea (book 1 in the series) ready for publication were friends who acquiesced to my begging them for feedback. I had a few very early readers and a couple of critique partners. I couldn’t have published without them.

Well, there will be one more novel in the Threats of Sky and Sea series after Riot of Storm and Smoke— I expect to release Fall of Thrones and Thorns sometime in 2016. I’m also currently working on another prequel short story set in the Threats of Sky and Sea world, for release later this year. And I’m revising/rewriting an NA contemporary that I hope to release in either late 2015 or early 2016. I have several other ideas in the pipeline as well.

YES. Oh my goodness, from the time I was little, I’ve been a hugely avid reader. My parents used to despair when they tried to send me to my room as a punishment; I’d shout “Fine! I’ll just read!”

My current read is a New Adult contemporary from debut author Sadie Munroe. So far, it’s a lovely story about two damaged and hardened individuals who manage to soften and patch each other up where it counts.

The king took everything from her. She’ll be damned if he gets her country too. #yafantasy

Drama (Though I love me some comedy)

Either/or, but if I have to choose… paperback

Jennifer Ellision spent a great deal of her childhood staying up past her bedtime with a book and a flashlight. When she couldn’t find the stories she wanted to read, she started writing them. She loves words, has a soft spot for fanfiction, and is a master of the fangirl flail. She resides in South Florida with her family, where she lives in fear of temperatures below 60 Fahrenheit.
Website
Facebook
Twitter
Instagram