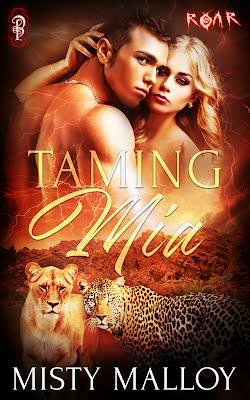 Mia is finally getting what she’s always wanted—the chance to be off on her own at college. Her own apartment, sexy college guys, and, most importantly, no more pride rules to follow. At least not until after graduation, when she’ll return home and marry the mate her father, the alpha, chooses for her. Until then, Mia is determined to enjoy her freedom to the fullest. And when Tristan comes along, she knows she’s met the perfect fling.

It’s Tristan’s last year at Mountain Ridge University. He’s ready for some smooth sailing, including no girl drama. As a jaguar shifter, he’s not interested in a relationship, and certainly not a mate. Mia is the answer to what he’s looking for—playful, sassy, and seeking a bit of no- strings-attached fun.

But is there more to their relationship than either of them is willing to admit?

Mia padded softly along the rocky, moonlit trail. Her cat eyes were well-adjusted to the darkness, and she carefully took in all of her surroundings. The large, craggy boulders and tall saguaro cacti loomed high above her in the canyon, and the sounds of small animals rustling in the bushes called to the hunter in her. Mmm. Yum. She’d love to do some hunting...but it would have to wait for another time. For now, she had something a little tastier in mind.

Her paws barely made a sound as she traveled down the path. She stepped delicately around a particularly spiky plant—she’d learned the hard way a few nights ago when she’d had to end her run early due to a pawful of cactus stickers. On high alert, she scanned the trail for other prickly invaders.

She nimbly jumped onto a large boulder and sat back on her haunches. She sniffed the air. Her whiskers twitched. The smells of the desert filled her nostrils—pungent and crisp, scents of earth and life. Mia was learning to love the way the desert smelled after a rain.

It also smelled of him. Mia had picked up his scent several minutes ago, and she knew he was close. But where was he? He had suggested they meet on this trail, and, now, he wanted to play hard to get. That damn sneaky cat.

It was a good thing she wanted to play, too. She didn’t even care why he had been so pissed off earlier—she just wanted to see him. To touch him. To taste him. She’d gone off to college to have fun, and she sure as hell was determined to do so. She wanted to forget about Asher, Rob, and most of all, her father’s meddling in things that didn’t concern him. Tonight, amidst the wide- open spaces of the canyon and the cool night air, she was going to do whatever the hell she pleased.

She scanned the canyon walls. A flicker of movement on a rocky ledge nearby caught her attention. A flick of a tail. The soft glint of moonlight reflecting off keen, predatory eyes. Tristan. He knew she saw him, and he inched slowly out of the shadows, his belly low to the ground. A low rumble emanated from deep within his chest.

He walked out to the edge of the outcropping. The strength of his jaguar emanated from him, his sleek spotted body accentuated with powerful shoulders and legs. He was the biggest feline shifter she’d ever seen. The rumbling purr in his chest turned into a fierce roar, vibrating across the canyon walls.

Oh, yes. A shudder went down Mia’s spine, electrifying all the nerves in her body. She wanted nothing more than to rub herself all over him. She purred, her insides turning into delightfully liquid goo as she thought about how his beautiful fur would feel against hers. His gaze penetrated her, ready to devour her. He was the predator...and she was his prey tonight.

Oh, yeah? Well, you can come and get it, then, big boy. You wanted to run tonight, so we’ll run.

Mia rose, standing strong on her lean, powerful legs. She belted out the loudest roar she could muster. Then she turned on her heels and bolted down the path.

She had no problem with the jaguar devouring every inch of her body tonight. But he’d have to catch her, first.

Misty Malloy’s obsession with hair bands started in the 80’s. When she’s not listening to Guns N’ Roses or writing, you can find her wrangling dogs at the animal shelter, doing Zumba, or having brunch. She loves wine, cheese, happy hour with both wine AND cheese (of course!), sexy historical movies, and alpha males. She lives in Tucson, Arizona, with her husband and their dire wolf dog.