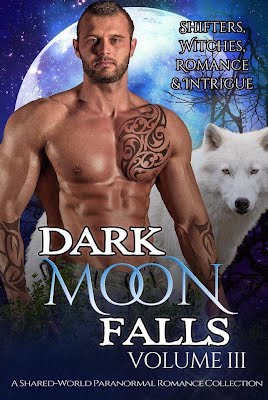 Dive into the romance and come to Dark Moon Falls.

High in the mountains of the Pacific Northwest, the sleepy town of Dark Moon Falls is not what it seems. Full of secrets, shifters, romance, and so much more…

This highly acclaimed series is back with Dark Moon Falls III! Packed with even more thrills for you with a collection of brand-new stories you’re sure to want to get your paws on. Filled with hot wolf shifters hunting for their one true mate, witches brew up trouble while mystery and suspense lurks around every corner.

Danger, intrigue, peril, and steamy romance abound in this amazing paranormal romance set which is sure to set your heart pounding and keep you glued to the pages into the wee hours of the night. Don’t set your alarm … you’ll be up all night with this! 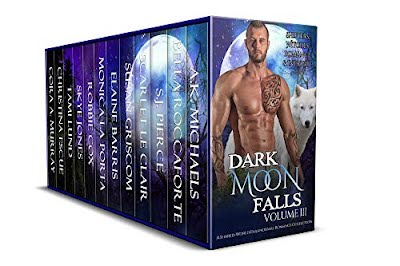 Alpha Elias Grant is sworn to protect his pack, but when he finds a girl on the run, with danger on her tail, he must make the toughest decision of his life. But, she’s not just any girl: she’s his … so, what will he risk for her … simple; everything!

He lost her once to the world, but this time will she give up the world for him?

Old enough to be her father, Reed Walker doesn’t think he’s right for Hayley, regardless of what his wolf believes. That is, until someone from her past threatens to take her away from him.

Hell hath no fury like a scorned widow out for revenge. Aiden might get burned if he stands in her way.

Former detective Garrett is running for his life, and he finds safety in Dark Moon Falls, at least for the moment.

After her coven is attacked, Meridian is running as well, but will her arrival in Dark Moon Falls bring doom down upon them all?

Fate intervenes after a one-night stand, transforming the lives of two casual lovers.

When wolf shifter Anthony Remington’s son goes missing, only one witch can help him, Luna Moran, who his wolf thinks might be their mate. Problem is: using her magic may turn Luna evil.

Theo by Cora A. Murray

Theo’s a wolf shifter lost and alone, but the burning need inside him to find his best friend keeps him going. He didn’t expect to run into a girl that’s his everything, a girl who sends his heart racing, who is more than his heart can handle.

A witch on the run & a wolf sent to hunt her down: a Star-Crossed love story

After the murder of his mate and pup, Eros Lykaios wanted nothing more than to live life as a lone wolf, until a dark beauty named for the goddess of the night crossed his path.

Born enemies, fated to be mates. Kellan goes to Dark Moon Falls to find his brother's killer and prevent war. What he finds his fated mate and has to choose sides between his Legion and his one true love.

The twelve authors of Dark Moon Falls, Volume 3 are from all over the world, Scotland, New Zeeland, Australia, United States. They are an amazing collection of New York Times and USA Today best selling authors. 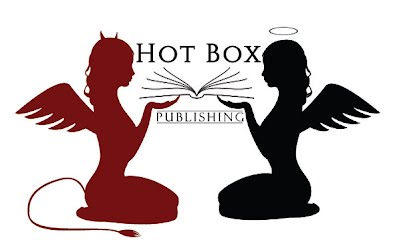 Hot Box Publishing is run by Bella and Ava … two gals from opposite corners of the world. Ava is a New York Times & USA Today Bestselling Author and Bella is an Award Winning, and Amazon Bestselling Author, and between them they have over 85 books published. They have experience in various shared worlds where they have both individual and shared IP rights, including boxed sets. They own and run Hot Box Publishing with integrity, honesty, and fairness as their mantra.