In the course of a morning, Dungsten Crease resurrects his neighbor’s dog, is arrested by TSA for carrying a weapon which never existed, and drowns a woman at an airline ticket counter—or could he be hallucinating? In his panic he locks himself in the men's room of a coffee shop only to find a strange man in cycling togs sharing the space. The lanky intruder claims to be Dungsten’s neurally implanted concierge unit who has two disturbing messages. Dungsten is a Shaper—an obsolete, genetically programmed tool created by a bankrupt galactic corporation to terraform planetary experiences for vacationing clients; and the woman he inadvertently killed at the airport with his Shaper abilities will be the love of his life. Attracting government agents who want to weaponize him and Galactic Business Council assassins who want to terminate him, fear drives the Shaper within to inadvertently bifurcate, a second Dungsten also now running from his pursuers. But bifurcation comes at a price: loss of appetite, swelling of the hands and feet, an erection lasting longer than four hours, loss of bladder control, rectal bleeding, psychosis, convulsions, and sudden death. To pull himself back together and if he’s lucky, survive, he must master his Shaper abilities before he becomes a victim, or worse, accidentally destroys Earth and everyone he loves along with it. 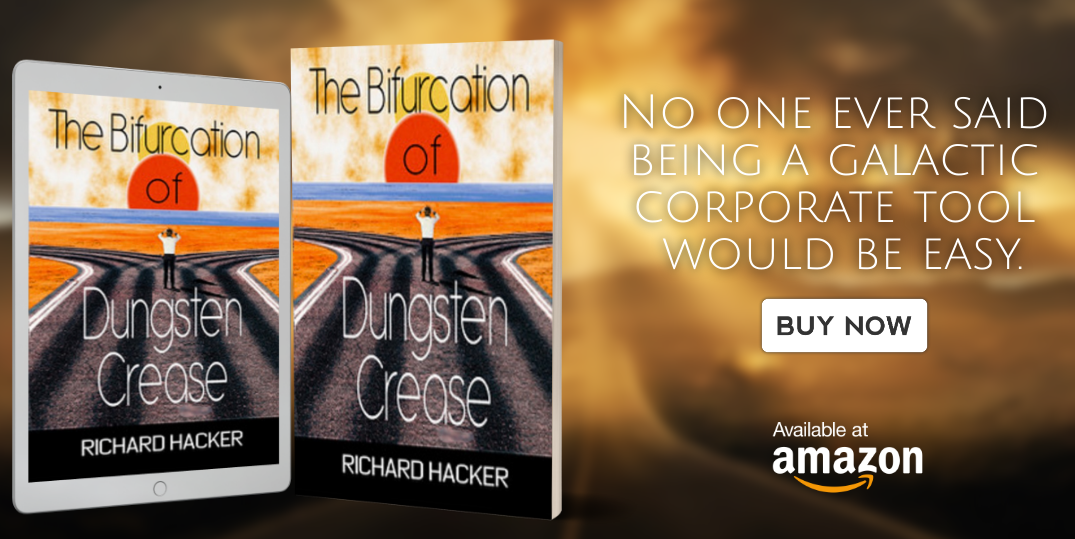 Richard Hacker, lives and writes in Seattle, Washington after living many years in Austin, Texas. In addition to the science fiction/fantasy novels, which include The Alchimeía Series, his crime novels ride the thin line between fact and fiction in Texas. Along the way, his writing has been recognized by the Writer’s League of Texas and the Pacific Northwest Writers Association. As a judge in literary contests shuch as PNWA and ChicLit, and as a freelance development editor, he enjoys the opportunity to work with other writers. In addition, he is the Sci-Fi/Fantasy editor for the Del Sol Review. When not writing he’s singing jazz and creating visual art.

Other books by Richard Hacker:

ALL HAT AND NO CATTLE