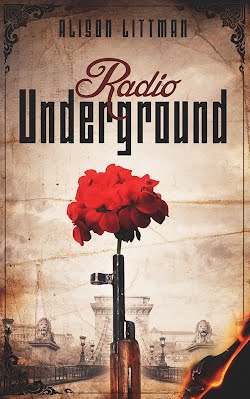 With swift, bold, and powerful writing, debut author Alison Littman captures the epic and devastating uprising against the Soviet regime in Cold War Hungary, illuminating a time in history when news, rock ‘n’ roll and underground journalism forever changed the lives of those living behind the Iron Curtain. Radio Underground tells the story of a family ripped apart by the Hungarian Revolution of 1956 as a mother and fanatical underground journalist relentlessly goes to battle against the communist government, putting the lives of her daughter and husband at risk when she commits a calamitous murder. She is banished to a secret, underground prison where she faces madness, torture, and a possible death sentence. Years later, her daughter must decide to save the mother who discarded her, or leave her life to fate. A beautiful, relevant novel that explores the lengths and limits of love, family and the power of expression.

“Radio Underground tells a thrilling story of family and loyalty in the face of oppression. Its richly evoked historical setting took me back to the Cold War era, while its warm-blooded characters stole my heart. A propulsive read and a timely reminder that maintaining our humanity requires courage as much as love.” -- Kim van Alkemade, New York Times bestselling author of Orphan #8 and Bachelor Girl

“Set during the Hungarian revolution of 1956 and its heartbreaking aftermath, this vivid and compelling novel is a story of courage, family and the importance of "breaking the silence." -- Susan Breen, author of The Fiction Class.

A black Zis-110 idled ahead of me, the car’s curtains drawn on its passenger windows. I shivered at the sight of the secret police’s hallmark car, thinking of all the friends who had disappeared for no reason, taken away by henchmen in the middle of the night, never to return. It was no coincidence the Zis looked just like a hearse. I scurried onto a side street, dodging the car and the poor captives I assumed sat, trembling, inside of it.

I tiptoed past the Ministry of Interior, where red geraniums lined the building’s windows. In the secret prisons below, police tortured people with whips, limb crushers, nail presses, and scalding and freezing baths. Or else they just executed them. But the geraniums were always fresh.

I slid my fingers across the building’s dusty exteriors, imagining I could somehow transfer my nerves onto the cold, unfeeling brick. I had snuck through the streets after curfew for years, but tonight was different. I could feel the regime sensing our newfound courage, like a dog pushing its nose high into the air, catching the subtle perfume of a rabbit nearby.

After walking several blocks, I spied smoke unfurling in the path before me, like a languid snake expanding as it digests a fresh kill. Following it, I found Antal, his eyes closed, relishing in a cigarette.

“Antal, it’s me,” I said, coughing on the smoke now choking me.

Antal smiled and opened his eyes, his cataracts reflecting the glow of the street lamps. “Eszter, it’s good to see you.”

“It’s good to see you too.” I kissed Antal on both cheeks, feeling his dry skin against mine and wondering how long he’d been outside waiting for me in the cold.

“Tell me, what information do you have for me today?”

“It will happen tomorrow,” I said. “Today, technically.”

It was already past midnight.

“Yes,” I said. “I went to their meeting. The students decided they’re going to march. I heard them talking about gathering arms.”

“How many people are participating in this … this march?” Antal asked as he stamped his cigarette into the ground and lit another one.

“It doesn’t take a genius to predict how Gerő will react.”

“Gerő will slaughter them,” I said, feeling dizzy as I said aloud what we both knew. Hungary’s leader, Erno Gerő, was a Soviet puppet with an arsenal at the ready. “Without enough people hearing about it and organizing, it will just be a bloodbath.”

Antal fell back against the brick wall, suddenly losing his breath. He was always so levelheaded, so much so it often drove me to even greater heights of anxiety as I tried to compensate for his indifference. His fingers, still clutching the cigarette, quivered as his eyes searched the space behind me.

“The state radio will probably ignore this and just keep spewing out its propaganda,” he said.

“Exactly. We’re going to print with this too. But Realitás won’t reach enough people in time. An announcement on Radio Free Europe is the students’ only hope.” I held on to Antal’s shoulders to steady him. “It has to happen first thing in the morning, so people will have time to plan.”

The closest Radio Free Europe outpost was in Vienna. If Antal left now, he would get there by four in the morning.

“I already have meetings scheduled in Vienna for today,” he said. “I’ll visit our Radio Free Europe contacts as soon as I get there and cancel my other meetings to get back in time for the march. Gerő will think I cut short a routine visit to be by his side.”

Our lives by day were lies—Antal’s more than most. He served as the regime’s Deputy Interior Minister. After being forced to coordinate the executions of his friends—communists who threatened the power structure when they became too popular—he resolved to undermine the regime in any way possible. He began relaying intelligence to the American-run Radio Free Europe. With the freedom to travel at will and deep knowledge of the government’s inner workings, he also became an asset to Realitás, the underground newspaper I ran.

“It’s already one in the morning,” I said. “What will you do when they ask you why you’re crossing the border so late?”

“This is normal for me. I go to Vienna at all times of the day and night, just to keep them guessing. Just in case I run into a situation like this.”

“Smart. Well, you better leave now before Gerő tries to get in touch.”

We both knew Antal’s phone could have been ringing right then. I wondered what it would cost him—or his children and grandchildren—if he wasn’t there to answer it.

“I’ll be back,” Antal said, coughing into his hands, still shaking from what I knew was the fear we all shared.

“Wait.” I pulled out a tattered piece of paper, wincing as the cuts in my hand protested the sudden movement. “Take this with you. A student gave it to me yesterday. It’s a coded list of meeting points and times for the march. You have to get this on air too.”

Antal nodded as I slid the paper into his coat pocket, making sure to secure the meticulously crafted plans of the brave, hopeful students. They probably didn’t even realize that at this moment, Soviet troops were almost certainly readying their tanks at a base nearby.

Alison Littman lives in San Francisco where she is a writer by day and standup comedian by night. She has contributed to magazines on John F. Kennedy and The Beatles, writing feature stories on listening to rock ‘n’ roll behind the Iron Curtain and the Cuban Missile Crisis. She produces two comedy shows in San Francisco and performs at clubs, bars and alternative venues throughout the city. This is her first novel.