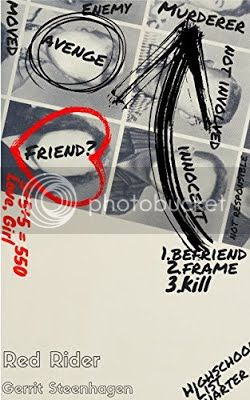 A grieving father – known to the reader only as Teacher – takes on a new identity after the brutal murder of his teenaged son. Masquerading as a substitute teacher, he tracks down the killer – a high school senior – and methodically builds a web to entrap him. Teacher does not desire simple justice or death for the killer; he wants the killer to endure what his son endured. But Teacher’s plan takes a life-shattering turn when he must save his son’s former girlfriend from the clutches of the brutal MS-13 gang.

A taut, suspenseful thriller, Red Rider explores the depths of revenge and the strength of human bonds.

Gerrit Steenhagen grew up in San Diego, California. He wrote, produced, and directed the indie drama If Tomorrow Comes. He currently resides in Los Angeles.

Posted by Anonymous at 7:44 AM