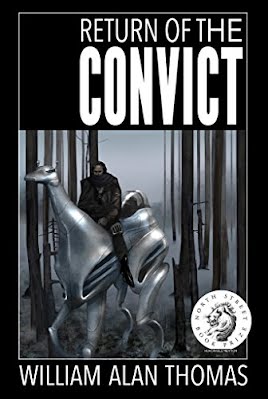 It's 2143. In the aftermath of wars, plagues and environmental breakdown, there's growing hope. Thanks to extensive brain implants, space cadet Dom enjoys a perfect memory. He and girlfriend Astra practice telepathy and attain new heights.

Lucas, Dom's benefactor and parent clone, is a diseased convict now returned from Martian exile. Dom's brain implants offer Lucas the chance for a life-saving mind merger, and he intends to make that happen.

Praise for Return of the Convict:

"The novel is in turn thrilling and thought-provoking, and has the makings of a powerful sci-fi franchise."--Foreword Reviews (Clarion Review, 5 stars)

There were forty-five of us transports crammed into the space bus, and even though everyone was sedated, the two and a half day trip was arduous.

After we docked there was a slight shaking. Our capsule shot backward, and stopped. With a hissing of air, the door slid open. “Welcome to Mir,” a man’s voice said. “Everybody out.”

The artificial gravity here was less than the moon’s; I got up without much difficulty. Two uniformed guards checked us off as we came out. “You’re Dominic Tessier,” one said crisply, when she touched my ID tag with a scanner.

My legs uncertain, I stepped onto a moving sidewalk that took us through a tunnel. In a few minutes the passageway curved, and the main terminus area of the space station came into view. I held tight to the railing and stared. The people here arrived and departed from all over the solar system: personnel from the space ships, businessmen, and new-world workers. Some, while roughly dressed, had a special swagger. I thought they might be prospectors. Then a group of T-men walked through in unisex suits and skull caps. Although silent, their expressions and gestures showed communication. Thanks to their brain implants, they were telepathic.

Only a few months earlier, I’d been a student at the Space Training Academy. My brain was being transformed through implants, and I looked forward myself, to a career in space as a T-man administrator. An awful injustice had been done to me, and my dreams were trashed. Yet I felt no regret, resentment, or any emotion at all. A silver bracelet around my wrist created a chemically-induced docility, more powerful than chains.

Our guards took us along a walkway above a large, brightly lit loading dock. Through the side-mesh I could see the Stellar Blossom. The ship’s blue hull seemed to stretch on forever; it dwarfed the men gathered to service her.

Ahead was a short, balding man I remembered from my time in jail. “Phil,” I called, catching up to him.

He turned to me without surprise. “Hello, Dom,” he said in the slow speech of the bracelet wearers. He pointed up the dock to a line of people entering the ship under a bright yellow canopy. “Did you notice? Some are women.”

“Passengers,” I said. “A different world.” 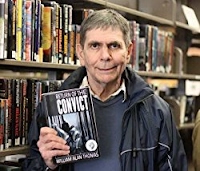 A University of Chicago graduate in English, William Alan Thomas has been a civil servant, fisherman, and first aid attendant, among many other things. He's written most of his life, and today his two main series, thriller and sci-fi, are well underway.