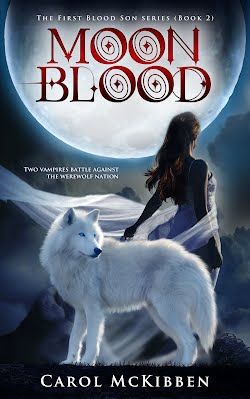 Attacked by the werewolf nation, sworn vampire enemies, Kane and Moon are thrown into turmoil to defend themselves and those they love. With a stalking shifter network out to destroy them, every battle could be their last.

Traveling from Nova Scotia to Kane’s Italian Tuscany estate, they stand ground against their enemies. As they prepare to fight, a mysterious female attracts Kane. Who is she? Could she have ulterior motives? As Kane and Moon unravel the threat she poses, they realize the real reason behind the werewolves’ plot against them. Not a cookie cutter version of this genre, the mystery stays alive as McKibben once again raises the level of paranormal, narrated by a hybrid wolf. The result it a battle of strength, power, and ultimately, love.

Carol McKibben writes from the heart of a dog’s eyes. Her books help support her dog rescue efforts and focus on unconditional love.
When Carol isn't saving Siberian Huskies, Labrador Retrievers, or feeding the horde of rescue dogs she and her husband Mark rehabilitate, she's out riding her sixteen-hand Frisian among the San Gabriel mountains.
In addition to her passion for writing, she rides and competes with her dance partner Okido I.T. in Classical Dressage.