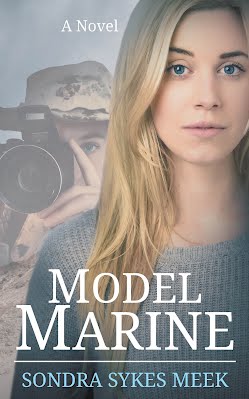 Molly Monroe had her future planned out for her. When she makes an impulsive decision to join the Marine Corps, her boyfriend breaks up with her, her brother bears the burden of guilt, and her mother feels betrayed. The people in Molly’s life have always tried to protect her, but she wants to protect herself.

As a Combat Camera Marine, Molly observes and records her environment from behind the lens, where image shapes day-to-day life. After she is wounded during a combat deployment, her dreams are frightening, and her memories are a kaleidoscope of scattered and chaotic scenes; a collision of past and present, real and unreal. Snapshots in time. Glimpses of war. Fragments of love: lost and found.

This story unfolds through multiple perspectives and as the negatives and positives develop, an image of the Model Marine is sharpened into focus.

She sat on the hill with Ramirez, overlooking the Airboss tent. The desert stretched for miles across an endless horizon. The orange glow of the sun peeked over the sea of sand and sent violet and crimson streaks into the fading night sky. It reminded her of another time, when the sea was ocean instead of sand—when love rekindled and then withered again. She marveled at the natural beauty of a place that was so perilous.

“Thanks for coming with me,” Ramirez said.

“Of course. I’m glad you brought me along,” Monroe said. “Will they be here soon?”

“Any minute. I prepared the last one for this flight a couple hours ago.”

“I can’t imagine having your job, Ramirez. Does it ever get to you?”

“I try to detach myself. You know how that goes. But sometimes, they look so young. I can’t help thinking about my kid brother. I can’t help imagining what their families are going through. Sometimes, it starts to feel like I know them.”

Two Humvees approached the flight line and parked; the Marines inside waited for their cue.

The CH-53 helicopter roared to life, the rotating blades sending desert dust particles funneling around the gray bird. The Marines exited their vehicles and pulled the large black bag out of the back. Placing it on a field-expedient stretcher, they somberly carried their brother up the ramp, into the belly of the bird. They showed no sense of urgency, as they repeated the slow procession from the Humvee to the helo two more times. On their final trip out of the helicopter, the Marines formed a line from a distance. As the bird began ascent of the Angel Flight, Corporal Monroe and Lance Corporal Ramirez stood and joined their fellow warriors in a final salute.

Sondra Sykes Meek is originally from Florida, but she has lived in several locations in the United States and abroad. She is a wife and mother of two, a retired Marine Corps Master Sergeant, and a Project Manager in the Defense Industry. She earned a Master of Fine Arts in Creative Writing, and has several stories in various stages of progress. She hopes to write full-time one day, but for now, she writes in the spare, quiet moments of her life.

Sondra wrote and published Model Marine: A Novel to reveal the courage and sacrifices of Marines and their families. She wanted to offer readers another kind of hero: someone who is not supernatural, immortal, or from the future. Although the events of this story are fiction, the setting and characters are influenced by her experiences as a Marine. The narrative is as authentic as it can be without excluding civilian readers. The protagonist is named after a Marine Corps icon, “Molly Marine.” This is especially relevant now, as 2018 marks 100 years since the first woman joined the United States Marine Corps.

Sondra hopes all readers enjoy this emotional journey of love, loss, and sacrifice. There are real heroes hidden within the pages of her debut novel. She invites you to meet them, love them, and remember them.