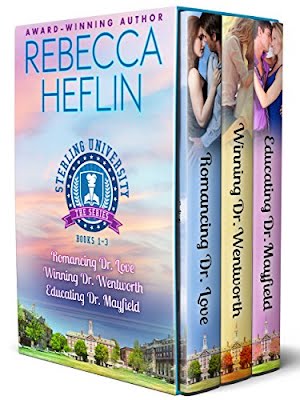 Three novellas. Three love stories. It isn't all academic when it comes to love.

She says it’s all about the chemistry. He says it’s all about the romance. Samantha Love has based her entire academic career on the hypothesis that love is simply a chemical reaction. Ethan Quinn thinks she’s taken love and all its mysteries and reduced it to something as romantic as a cholesterol test, and he sets out to prove her theory wrong. Is it chemistry or romance? Or a little of both?

She’s benched her heart. His is on injured reserve. Burned-out and broken-hearted math professor Shelby Wentworth returns to her hometown determined to escape the disgrace of a nasty divorce, shake off the taint of her ruined career, and start over, sans romance, but an unexpected reunion with Nash Taylor, former star quarterback and high school crush, promises to derail her plans. Will Shelby let the past dictate the future, or will Nash win her heart?

He has plenty to learn about love. She’s just the woman who can teach him. Creative writing professor Delaney Driscoll finds her plan to establish a new degree program blocked when Devon Mayfield, the uptight new college dean opposes her request. While she educates him on the benefits of the curriculum, can she make him forget the pain of his past and teach him that love is more than a just four-letter word?

Green was not her best color.

Seated at a table in Sterling’s one and only pub, Delaney Driscoll stared glumly across the table at her two best friends as they chattered about their upcoming weddings like two teenagers hopped-up on one-too-many energy drinks.

McGinty’s Pub often played host to life’s happiest and saddest events. It was where birthdays were toasted, engagements were announced, Sterling Bobcats wins were celebrated, and lives were remembered. It was only fitting that weddings should be planned there too.

“So, what do you think? Delaney? Earth to Delaney!” Sam snapped her fingers in front of her friend’s face.

“Where were you?” Shelby asked, with a quizzical look.

“Oh. Sorry.” She sighed then stuffed a fried pickle in her mouth.

“No, we’re sorry. All this talk about our weddings must be boring you to tears,” Sam said, a soft, understanding smile on her could’ve-been-a-model face.

Dr. Samantha Love, a psychology professor in the same college as Shelby and Delaney, had hit the news last year with a discovery the press called ‘the love test’—a blood test that determined a couple’s compatibility. One of the largest online dating services in the U.S. now offered the test as part of their premium package. And said ‘love test’ had found Sam’s match in one Ethan Quinn, hunky literature professor and dean of their college. Now their wedding was just two months away—in April.

A whiz kid at statistics, Dr. Shelby Wentworth was a mathematics professor, first at Stanford, and then for a short stint at Sterling, before she became the Director of Sports Analytics for Sterling’s athletics department. She and Sterling’s head football coach, Nash Taylor, got engaged—on the football field, no less—after Sterling won its first NCAA Division I Football Bowl Subdivision Championship, thanks in part to Shelby’s mad number-crunching skills. It was one of the most romantic proposals she and probably a million football fans had ever seen, thanks to an eagle-eyed cameraman who captured the moment, much to Nash and Shelby’s chagrin.

Their wedding was coming up in June.

To make matters worse in the single department, Shelby, who had been Delaney’s neighbor, moved out to Nash’s farmhouse.

Rebecca Heflin is an award-winning author who has dreamed of writing romantic fiction since she was fifteen and her older sister snuck a copy of Kathleen Woodiwiss' Shanna to her and told her to read it. Rebecca writes women's fiction and contemporary romance. When not passionately pursuing her dream, Rebecca is busy with her day-job at a large state university.

Rebecca is a member of Romance Writers of America (RWA), Florida Romance Writers, RWA Contemporary Romance, and Florida Writers Association. She and her mountain-climbing husband live at sea level in sunny Florida.