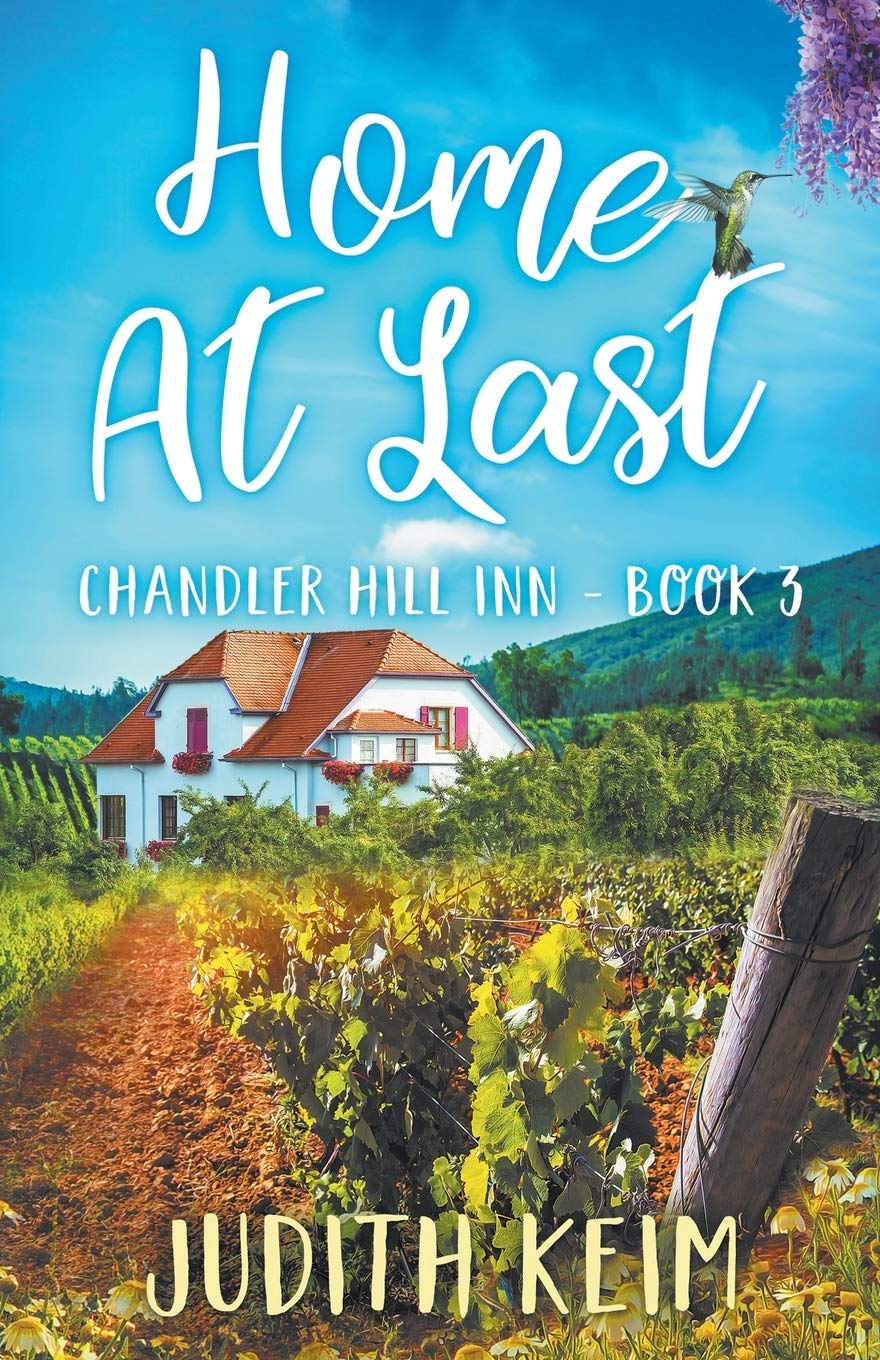 Louise “Lulu” Kingsley is thrilled to discover after years of wishing for a sibling, Cami Chandler is her half-sister. When Cami invites her to live with her at Chandler Hill, Lulu jumps at the chance to leave behind all the heartache in her recent life. Not the spoiled little rich girl the media would like everyone to think, Lulu digs into marketing for the inn and winery, feeling more comfortable there than she ever did in California with her political father. Better yet, her mother is becoming a stronger, happier person and shares the idea of becoming part of a new family. Even though Lulu is aware that Miguel Lopez is the kind of guy who represents everything she’s trying to forget, she’s attracted to him. Following a heartbreaking situation, she steps away from their relationship. Lulu settles in at Chandler Hill, coping the best way she knows—by working hard. But when Cami’s beloved grandfather, Rafe, has a stroke, Lulu realizes life is short and knows she must make things right with Miguel, and learns that home is where your heart leads you.

Other Books in the Chandler Hill Inn Series:

Camilla “Cami” Chandler comes home from France to take over the Chandler Hill Inn and Winery for her recently-deceased grandmother, Lettie, as she’d always promised. Determined to succeed in this new venture, she finds herself in trouble from the beginning when she discovers most of her grandmother’s estate intended for maintaining the inn’s business expenses was lost in a Ponzi scheme. She forges ahead to provide her guests with wonderful experiences and to produce the best wines in Willamette Valley. After being ditched by her French boyfriend, she decides that being friends with Drew Farley is the safest way to proceed. He loves grape growing and winemaking as much as she does and isn’t looking for anything beyond friendship.

When a bride planning a wedding at the inn tells Cami that she looks exactly like her best friend, life becomes even more complicated. Never having known even the name of her father, Cami searches for a connection and comes to realize how complicated love and family can be.

In 1970, Violet Hawkins’ only wish at eighteen is to escape her life in the Dayton, Ohio, foster-care system and make her way to the west coast to enjoy a mellow life and find the love she’s been missing all her life. She makes it to San Francisco, but soon learns she needs a job if she’s to live properly. A kind, young man named Kenton Chandler offers her a sandwich and a job at his father’s inn and vineyards. With nothing to lose, Lettie takes him up on his offer and begins a whole new life in the Willamette Valley, Oregon. She immediately falls in love with the land and is fascinated with the idea of growing grapes in order to make wines. She, Kenton, and Rafe Lopez become friends as she learns about running the small inn on the property.

At the same time she marries Kenton, a stroke kills his father. And then before she can tell Kenton she’s pregnant, he dies in an automobile accident. Heartbroken and burdened with the gift of the Chandler Hill Inn and Winery, she’s left with the task of making them a success. Struggling to raise a child alone while working to grow the business, Lettie makes a shocking discovery that changes everything. 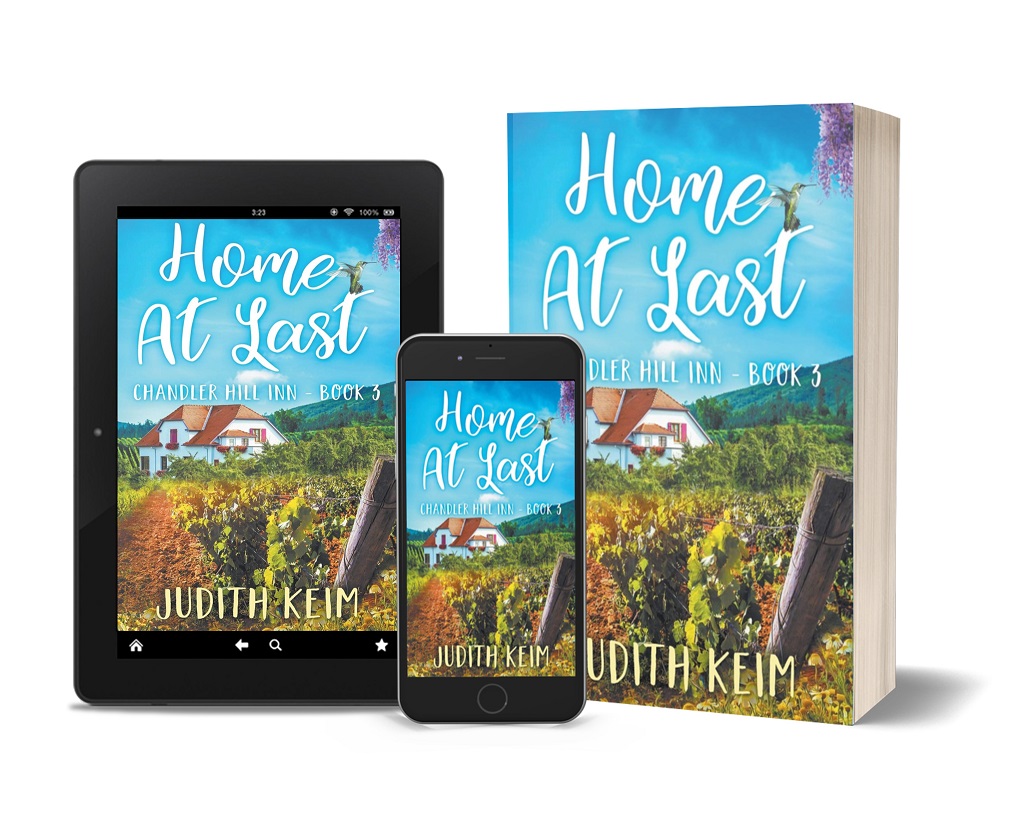 Louise “Lulu” Kingsley sat on the deck of Camilla Chandler’s home and wondered how she could be so lucky to live in a place like Willamette Valley, Oregon. The journey to reach this point was more than painful—it had almost destroyed her. But, here at Chandler Hill, she felt she might have found her true home at last.
Staring out at the rolling hills and the rows of grapevines devoid of their fruit after the harvest, she saw the goodness of the land, its beauty and, most of all, the comforting prospect of more harvests to come. She thought of this continuity of life as a renewal of her own.
If Cami hadn’t offered her a place to stay and a job in an entirely new location, Lulu wasn’t sure she could have survived the last year of family scandal and misfortune. For anyone who didn’t know much about her, they’d think her life was a privileged, easy one as the daughter of a rich, powerful man who’d one day wanted to run for president of the United States. But the man who tied her to her newly discovered half-sister was a man of too many appetites, and his actions had hurt others, including her fragile mother and her.
The understanding shown by the half-sister she’d never known growing up meant the world to her. Cami came from a long line of kind, generous Chandler and Lopez families. Living and working at the Chandler Hill Inn and Winery was more than an ordinary existence. For Lulu, it meant finding a loving place in the world, one she’d desperately needed.
“I thought I’d find you here,” said Cami, stepping onto the deck and standing behind her. “I love to sit here and gaze out at the land. It’s very peaceful toward the end of the day and, as always, I think of Nonnee. My grandmother’s love of the land was the foundation for everything that’s been done here with both the inn and the winery.”
Lulu turned around in her rocking chair and smiled up at Cami. Not much older than she, Cami’s big heart matched her usual smile. Though Cami wasn’t as tall as Lulu and had totally opposite coloring, their facial features were astonishingly alike. Among other things, they shared a tiny quirk—misshapen earlobes, a genetic inheritance from their father. Lulu wished she had strawberry-blond curls like Cami and her grandmother, Lettie Chandler, but Lulu’s hair was straight and dark.
Cami took a seat in a chair next to her. “Gwen is very pleased to have you assist her at The Barn. I explained it was only temporary, that you’d agreed to handle our marketing program. But with the holiday season not that far away, I realize both she and I will need your help until after the new year.”
“I love being part of the staff,” said Lulu, meaning it.
Cami gave her a tender smile. “Sweetie, you’re much more than one of the staff; you’re family. We intend to use your marketing and sales skills here at the inn and the other two wineries now associated with Chandler Hill.”
A warmth filled Lulu. Being part of a real, healthy family was such a gift. An only child after the death of her younger, ten-year-old brother, Teddy, she’d always longed for siblings. Cami’s grandfather, Rafe, was a wonderful man who’d been very kind to her. They’d formed a bond over the fact that her father and Lettie and Rafe’s daughter, Autumn, had met and fallen in love, producing Cami. The rest of Cami’s family consisted of a whole group of people who weren’t related by blood, but were still a close-knit group. 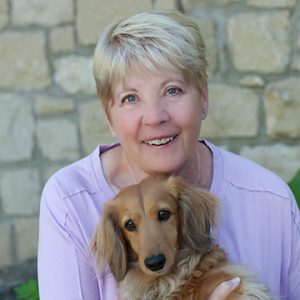 Judith Keim enjoyed her childhood and young-adult years in Elmira, New York, and now makes her home in Boise, Idaho, with her husband and their two dachshunds, Winston and Wally, and other members of her family.

A hybrid author who both has a publisher and self-publishes, Ms. Keim writes heart-warming novels about women who face unexpected challenges, meet them with strength, and find love and happiness along the way. Her best-selling books are based, in part, on many of the places she's lived or visited and on the interesting people she's met, creating believable characters and realistic settings her many loyal readers love. Ms. Keim loves to hear from her readers and appreciates their enthusiasm for her stories.