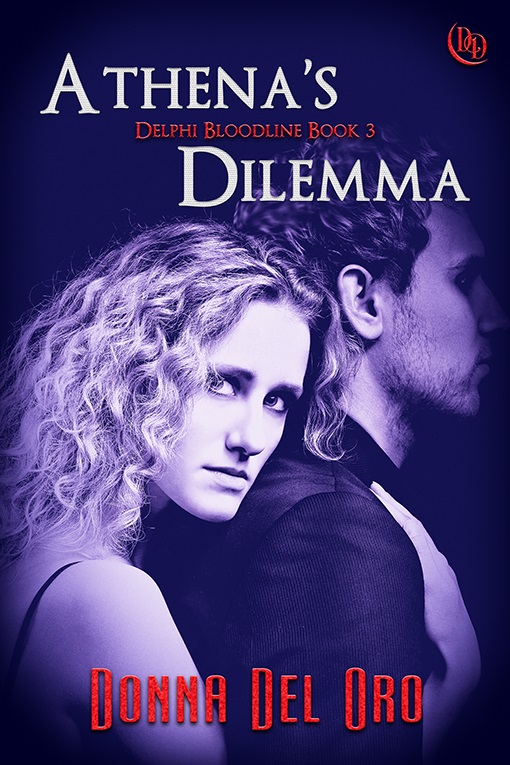 While Athena tries to decide whether to take her relationship with Kas Skoros to another level, she encounters two dangerous villains, a cunning murderer and a child trafficker.

After Detective Ochoa’s cousin, Detective Inspector Villalobos, persuades Athena to help him with this baffling case, she realizes a truth that horrifies her and threatens both her and Kas. While at a crowded Christmas festival in the Sierra foothill town of Grass Valley, they encounter a man who attempts to kidnap Kas’s nephew. It was Athena’s lapse of attention which nearly causes this tragedy and threatens to destroy her relationship with Kas. Only their seeking of justice can right this wrong, and they risk their lives to do so. 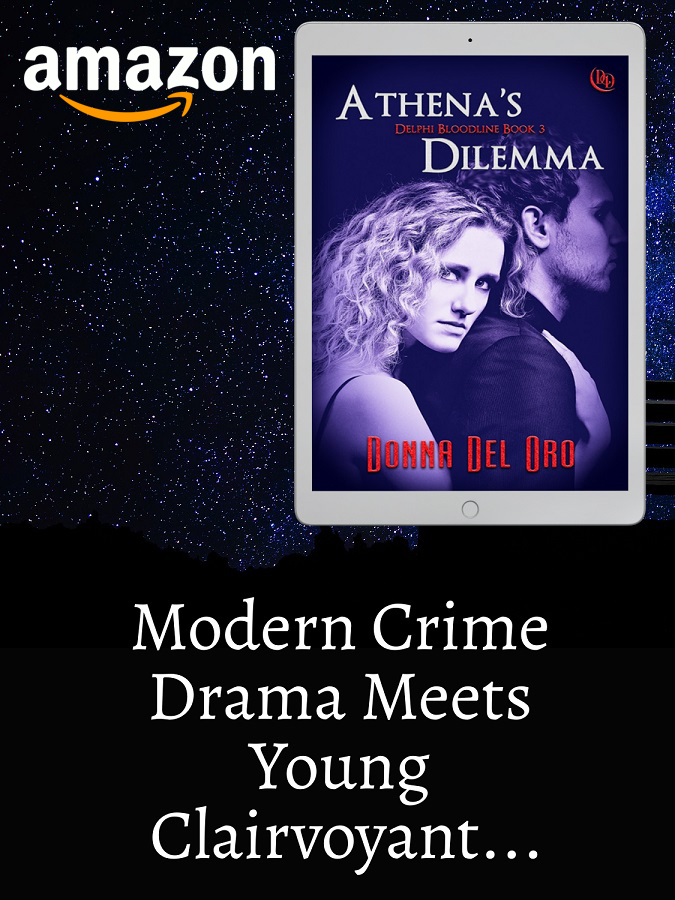 Other Books in the Delphi Bloodline Series:

Athena Butler, the twenty-year-old descendant of an ancient bloodline of psychics, yearns to live a normal life. She wants a career in art, a boyfriend, independence. Her clairvoyance has taught her, however, that people can be false and dangerous. Although warned to keep her psychic gifts a secret, she’s recruited by law enforcement to help search for a serial killer and to uncover a terrorist cell that threatens her own diplomat father.

She bonds with an intriguing, handsome man, Kas Skoros, who knows her secret and accepts it. Of the same bloodline, his own mother is precognitive and predicts they are meant to be together…someday. Kas realizes that life is too uncertain, but he can’t resist his growing passion for the strange young woman.

Still, they face obstacles beyond their control. Can Athena and Kas overcome these obstacles? More importantly, can Athena stay alive long enough to fulfill her dream of a normal life?

Kas Skoros, his marriage to Alex’s former fiancée now annulled and no longer intimidated by Athena’s psychic gifts, begs her to move to San Francisco and manage an art gallery that his family’s company owns. However, burned once, Athena holds him at arm’s length.

Athena is enticed to consult in another serial killer case. As time passes and secrets are leaked, others—including the killer’s brother—find out that Athena is the one who’s helping the police. Meanwhile, a strange young woman on a motorcycle appears to be stalking her. Warning bells go off as Athena realizes the woman is not who she seems to be.

Athena closed her eyes momentarily against the bright sunlight glittering off the San Francisco Bay waters. She inhaled a whiff of briny scent spiced with a hint of pine from nearby trees. With a little more effort, she made another attempt to shut off the mental channel through which her strangely gifted mind often surged. The ebb and flow of too many people and their thoughts caused her head to ache like the bloody devil. Like turning off a spigot and thank god her mother had taught her how to do this. Only this morning, walking amid the crowds along the Embarcadero, she was having difficulty.

One middle-aged man, pulling two rolling suitcases towards a yellow cab, whipped around. Anger creased his face as the woman by his side opened the cab’s passenger door and climbed in.

So much for this damned cruise! Nothing can save this rotten marriage. Dead as a doornail! Good riddance to it!

The man disappeared inside the cab but not before Athena had glimpsed a private look into their doomed marriage.

With a slight, sad shake of her head, she tried to shut off the Flow channel again. The noisy crowds disembarking from the cruise ship terminal at Pier twenty-nine jostled her as she stepped around rolling suitcases and the slow-moving elderly. She continued walking briskly along the Embarcadero southward.

Too much human noise.

Hurrying up, she retraced her steps on this morning constitutional, as her British father called it. This morning walk had become a habit, first initiated by her father years ago, and she’d looked forward to accompanying him on these walks as a schoolgirl in London and wherever else the Foreign Service had taken them. Her thoughts traveled to her parents in Milan, where her staunchly patriotic father served as British Consul General and where her clairvoyant, Italian-born mother served the local carabinieri and polizia di stato as an investigatory consultant. Her mother had taught her the importance of helping law enforcement in any way she could. Athena still questioned the wisdom of using their gift in that way. In her experience, that kind of association always backfired.

At any rate, she would make plans to visit them at Christmas time. How she missed them!

That is, if Kas didn’t need her at the gallery. Christmas was a little more than six weeks away and she hadn’t yet booked her flight. She’d moved to San Francisco only two months ago, and as agreed, had taken over management of the Stargazer Tower’s art gallery, situated at street level on the southwest corner of the forty-floor building. Kas—Keriakos Alexander Skoros--had begged her to join him at the Stargazer and well, didn’t love take precedence over all other concerns?

Lately, it seemed to. Falling in love again, rather never falling out of it, seemed to have a physical effect she had no control over. Call it a flood of endorphins in the brain, but she was its helpless captive.

Being able to say, I’m crazy, in two foreign languages didn’t change her situation one tad.

She opened her eyes and glanced to the right. After two months in the city by the bay, she had already developed a kind of mental map of the area. Lombard Street, that famously crooked street, emptied into the bay at this point, just before Green Street. The local TV stations transmitted from the red brick building across the boulevard that ran parallel to the Embarcadero and the piers. The Exploratorium was on her left, a delightful techie museum that she’d already explored with Kas. Broadway came up next, she reminded herself, part of her city-map self-quiz. San Francisco was a small city compared to London, barely one million inhabitants eclipsed by her hometown’s eight-point-eight million in central London and twenty-six million in greater Metro London. Still, San Francisco was new to her and she was doing her best to sort it all out.

The Waterfront restaurant next to the Pier five building, where Kas had taken her to dine numerous times, was open even now, eight o’clock in the morning, but her favorite breakfast place was the Marketplace at the Ferry Building. Inside were restaurants, food booths, boutiques, all housed in a hundred-year-old building that had miraculously survived the 1906 earthquake. Fifty yards away, she caught the wafting of aromas from inside the Marketplace.

Then, like the darkness from a grisly underworld, she looked across the bustling boulevard at Washington Park. A water sculpture that looked like carved, gray granite blocks arose from the green grass. It was a place she avoided since her first walk through the park, as the mad and drug-induced ramblings of the homeless scattered about in sleeping bags and under makeshift cardboard covers and ratty tents bombarded her mind and caused her excruciating mental pain.

Help me, Mommy! They’re crawling all over me, help me.

I’m gonna kill that bitch…next time she comes to suck my dick…ain’t givin’ her no ten bucks! Gotta kill her before she kills me…

Athena quickened her step as a man in rags left his tent, stood up and screamed at her from across the street. He raised his fist in a threatening gesture.

A woman of indeterminate age emerged from her cardboard hovel, orange hair all askew, her dirty pants and flannel shirt hanging off her gaunt frame like a discarded garment on a clothes hanger. She wept into her raised arm, spotted Athena and turned away, her sobs now audible.

What could Athena do in the face of this open human misery? Nothing. And the lingering guilt she felt added to her fear and pain.