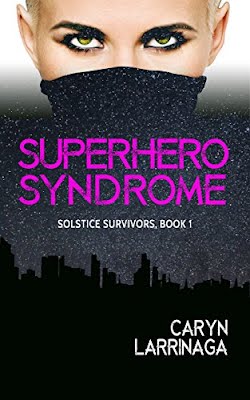 Tess McBray was dying. The Solstice Syndrome had no cure, and she resigned herself to an early grave. But just when she gave up on survival, all her symptoms mysteriously disappeared.

All but one symptom, anyway. Something is wrong with Tess's hands. They absorb any material they touch, and her skin turns to wood, or steel, or concrete. It doesn't take this comic-book obsessed 21-year-old long to figure out what's going on: somehow, she's developed super powers. And she's not the only one; across the country, people are coming forward and sharing their gifts with the world. In her own city, where the police are battling a human trafficking operation, a masked vigilante called The Fox is saving lives and stopping criminals.

Tess doesn't know where she fits into this new, super-powered world. But when people around her start disappearing, she can't just sit on the sidelines. Teaming up with The Fox to create the world's first superhero duo might be the only way to rid her city of evil and save the people she loves most.

I wish I’d been with the people I loved on the day the world changed. Then again, if someone had said, “Hey Tess, reality as you know it is about to be turned upside-down. You should probably witness this moment with someone you care about. Anybody fit that bill?” I would’ve barked out a bitter laugh and told them I’d rather be alone. Which, as it turns out, I was.
The meteor shower was all over the news. CNN covered it nonstop in the hours before it was visible, bringing on astronomers and astrophysicists to explain why it was such a big deal for a meteor shower of this size to be happening in the middle of January. Apparently, our scientists were supposed to be able to predict this kind of thing. The fact that one had snuck up on our collective set of observatories and satellites was—to quote one NASA representative—“extraordinary.”
I didn’t care if it was unprecedented. I didn’t care if people around the world were calling it a sign or a portent of the Second Coming or whatever. I just knew it was beautiful, and I wanted to see one more beautiful thing before I died.
The trick was explaining that to the floor nurse.
“Miss McBray, please go back to your room.” Nurse Davies crossed her beefy arms over her chest and planted her white-sneakered feet to the floor. “We’ve been over this before. You’re in no condition to leave.”
“How do you know?” I growled. “Nobody here can even tell me what my condition is.”
I shifted the weight of my duffle bag on my shoulder and leaned to the left, craning my neck to gauge the distance between Davies and the elevators. Only a few dozen yards. Sure, she towered over me. Sure, in the month I’d been in the hospital my body had wasted away to little more than a skin-wrapped skeleton. But I might be able to make a run for it.
Davies shook her head. “Do you think you’re going to find the answers out there?”
“Maybe. I don’t really care.”
She glared at me, and I knew exactly what she was thinking. It was the same thing she’d spat at me every time I’d fought against the IV, or questioned the contents of the murky soup they forced me to eat, or requested—and then repeatedly demanded—to have my comic book collection brought into the hospital. And just when I began to worry she’d disappoint me by refusing to lean on her catchphrase, she said it.
“Stop being so melodramatic.” 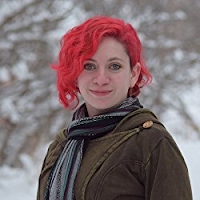 Caryn Larrinaga is a Basque-American mystery, horror, and urban fantasy writer living in Utah with her husband and cats. Her debut novel Donn’s Hill (March 2017, Immortal Works Press) was a 2017 Dragon Award finalist.

Watching scary movies through split fingers terrified Caryn as a child, and those nightmares inspire her to write now. She lives in a 90-year-old house with a colorful history, and the creaking walls and narrow hallways send her running (never walking) up the stairs from her basement. Exploring her fears through writing makes Caryn feel a little less foolish for wanting a buddy to accompany her into the tool shed.

When her fingers aren't glued to her laptop keyboard, Caryn also enjoys binge-watching Netflix with her husband, reading, playing video games, and filling up her phone's flash memory with pictures of her cats. She loves music and plays the bass guitar.