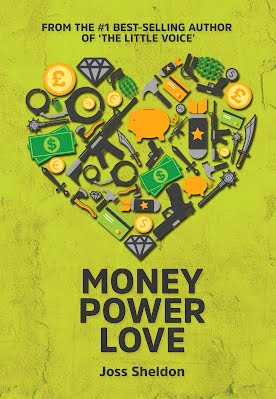 “All wars are bankers’ wars”

Born on three adjacent beds, a mere three seconds apart, our three heroes are united by a shared nature, but divided by a compulsion to chase three very different things: Money, power and love.

This is a human story; a tale about people like ourselves, cajoled by the whimsy of circumstance, who find themselves performing the most beautiful acts as well as the most vulgar.

This is a historical story; a tale set in the early 1800s, which shines a light on how bankers, with the power to create money out of nothing, were able to shape the world we live in today.

And this is a love story; a tale about three men, who all fall in love with the same woman, at exactly the same time.

Joss Sheldon is a scruffy nomad, unchained free-thinker, and post-modernist radical. Born in 1982, he was brought up in one of the anonymous suburbs which wrap themselves around London's beating heart. Then he escaped!

With a degree from the London School of Economics to his name, Sheldon had spells selling falafel at music festivals, being a ski-bum, and failing to turn the English Midlands into a haven of rugby league.

Then, in 2013, he ran off to McLeod Ganj; an Indian village which plays home to thousands of angry monkeys, hundreds of Tibetan refugees, and the Dalai Lama himself. It was there that Sheldon wrote his debut novel, 'Involution & Evolution'.

With several positive reviews to his name, Sheldon had caught the writing bug. He travelled to Palestine and Kurdistan, where he researched his second novel, 'Occupied'; a dystopian masterpiece unlike any other story you've ever read.

It was with his third novel, ‘The Little Voice’, that Sheldon really hit the big time; topping the charts on both sides of the Atlantic, and gaining widespread critical acclaim.

Now Sheldon has returned with his fourth, and most ambitious novel yet. “Money Power Love” is a literary mélange of historical, political and economic fiction; a love story that charts the rise of the British Empire, and the way in which bankers, with the power to create money out of nothing, were able to shape the world we live in today.