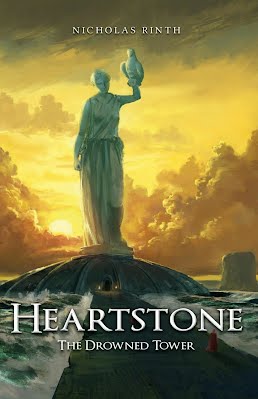 Freedom is out of the question for practitioners of the Institute, and any supporters otherwise are dealt with violently. A system Sylvie Sirx neither refutes, nor endorses—born from an enviable family, talented in her skills, and entirely too content with her position, her path has always been a straight one… until now.

Her qualifications backfire when an elder from the north descends upon her home for a Choosing. He calls upon the Drowned Tower’s most sought after practitioners for a simple job that ends in blood, and then Sylvie’s blissful world erupts. She finds herself in the company of the Elementalist, Jacques Dace, an insufferable but deadly enthusiast of personal reform. Together, they’re swept into a spiral of powerful magic and ancient grudges. Where truth bends, stones whisper secrets of the past, and their home lies at the heart of what could very well be Ferus Terria’s next recorded war.

And for once, she is forced to choose a side, learning for herself what it means to master fate.

Nicholas Rinth lives lakeside in the southern graces of Savannah, Georgia. Where he spends his time fantasizing about other worlds and working on his next novel.