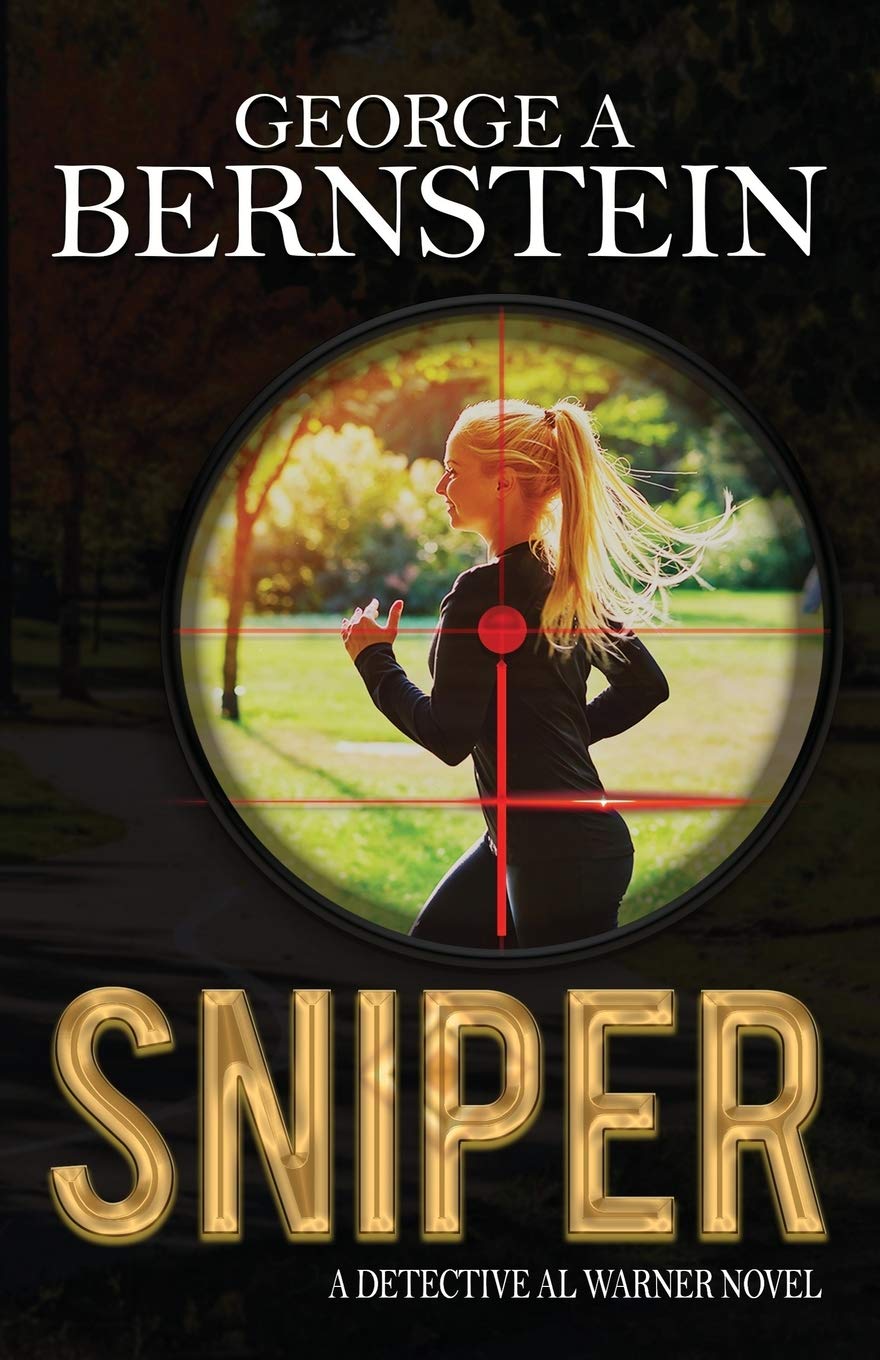 A deadly sniper is killing people in groups of three. Miami Detective Al Warner hates senseless murder, but the second set of targets provides several possible motives. One victim is brain dead but alive, reliant on life support. The FBI ID’s the shooter as The Shadow, an elusive, nameless contract killer they’ve hunted for two decades.

Charles Seagrave and his lover, Kim, are on a desperate search for a rare blood type liver donor for his nephew, Hunter, who only has months to live. The Shadow’s brain-dead victim is a possible candidate, but his mother won’t accept her son will never recover.

A chance connection finally leads Warner to the assassin. In a shocking twist of exposed identities and astounding revelations, The Shadow escapes. Has Warner finally met his match? The fight to save Hunter and Warner’s mission to apprehend The Shadow results in a battle that may prove deadly for all. 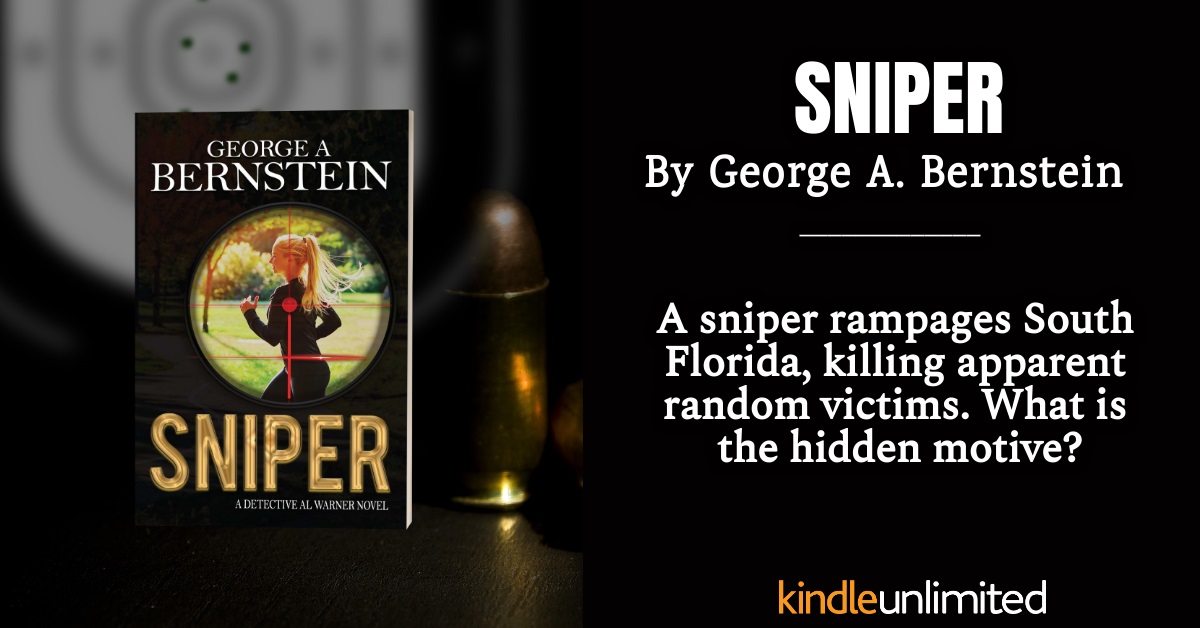 The time had come for people to begin dying.

I cracked open the door and my eyes swept the roof. Deserted. No surprise, considering the already intensified South Florida morning sun, as it arced above the distant palm trees. Mirrored sunglasses donned, I tugged the brim of a Marlins ball cap down to shade my eyes from the glare.

There, I spied what was needed near the eastern parapet . . . a three-foot-high steel mechanical box. Perfect. It offered a clear view of Bayfront Park, just across Biscayne Boulevard. I crouched and hurried across the roof’s black-tarred surface, my backpack and an oversized guitar case slung over my shoulder.

Shrugging off both, I removed a bedroll and spread it across the green top of the metal case. Latex gloves ensured I’d leave no prints or DNA. I flipped open the case and removed the pieces, taking less than a minute to assemble the rifle. A moment later, sprawled atop the flannel blanket and facing east, I loaded a 12.7mm round into the weapon’s breach, jacked four more into the magazine, and snapped it in place. More fire power than needed.

I arched my neck and took a quick preview of the landscape, then shed the gloves and pocketed them. A compact wind gauge set on the coping gave me direction and speed of the currently mild breeze.

I settled the weapon’s bipod on the metal surface. A gentle exhale quieted my heart before making preliminary adjustments to the telescopic sight. Right eye against the scope, I tweaked the focus and began a scan of the area.

There, the bus stop at NE 1st Street; and to the right, a path exiting the park. With a minor correction to the Leupold 5x25 scope, I swept the grounds, spotting the famous headless torso sculpture bordering the winding path.

Three joggers bobbed along the paths: a fit, thirty-ish woman coming toward me, a paunchy guy in his 50’s heading away, and a young jock—probably mid-twenties—on a crosswalk. Two kneeling Latino gardeners planted spring annuals along the trail. Drifting left out along Biscayne Boulevard, I located morning foot traffic striding along the walk, all apparent business-types on their way to offices in Miami’s financial district—a myriad of opportunities.

I sighed again, spread my legs a bit wider, and steadied my base as I fitted the butt of the TAC-50 snug against my shoulder. My clenched jaw required a wiggle to relieve tension as I sucked in a measured breath. This begins the first act, spawned from hours of scouting, detailed research, and the endless target practice at a remote ’Glades savannah: something very different from my usual contracts and using a new tool I’d come to love.

Now to initiate a reign of terror that will obscure my real motive. While I wasn’t the first at this scenario, mine was certainly the cleverest. No time for qualms, because as they say, the end justifies the means.

Been there, done that before, but this was the first time it was personal. Innocents sometimes perished to achieve a greater goal, but never before at my hand. That was about to change.

Who first? Ahh, the woman, just about to exit the park. I steadied her rhythmically loping body in the telescopic sight. Eleven hundred meters—an easy shot to baptize my deadly, new McMillan sniper rifle, acquired on the dark web. A soft breath eased from my lungs, and my lips tightened with resolve as I smoothly squeezed the trigger.

The sound-suppressed rifle emitted a quiet, high-pitched pop. The woman’s blond hair billowed out in a red-stained cloud, tossing her peaked cap away as the huge slug caught her left temple while in mid-stride. The impact slammed her to the ground as the exit wound blew half of her face away.

I blinked to moisten my eye and swung the scoped rifle left toward Biscayne Boulevard, searching for my next target. There, a guy hurrying along the walk, briefcase in hand, unaware of the mayhem just occurring behind him. I made a minor sight adjustment, exhaled, and squeezed off the next shot, catching him squarely between the shoulder blades. The big slug drove him across the walk, flattening him face down along the grassy border. Red spatter peppered the path in front of him. There was a loud yelp and a third victim, fifty-feet in front, tumbled over, clutching his shoulder.

I grunted and then pivoted my attention back to the park.

Hmm. Two with one shot. Unexpected consequences, but of little concern at the moment. One of the gardeners straightened by the flower bed. A hand shaded his eyes as he searched for the source of the sudden ruckus.

The rifle emitted a soft burp and my third shot pitched the kneeling man backward, arms flung wide, as he took the round on the breastbone.

No pause required to examine the results. I knew all three shots had been instantly fatal. The fourth, unplanned victim must have caught a ricochet of the super-sonic slug as it blew through my victim and bounced off the concrete walkway. Just some collateral damage. There’ll be a lot more of that soon enough.

I slipped off the steel box and pulled the rifle and bedroll down. Scampering around in a squat, I collected and pocketed the three still-hot spent casings and snatched up my backpack and guitar case. Duck-walking away from the tile-topped parapet of the tall office building, I reached the exit door. I hunkered in the shadows and folded the rifle’s bipod, removed the detachable scope and stock, and replaced them in my customized guitar case. Glancing up, I wondered if someone in the nearby taller apartment buildings noticed my activity. Speed now was essential.

I shrugged on the backpack with the bedroll already fastened on top. With the cased weapon slung over a shoulder, I hurried through the door toward the staircase. It would be a long trip down on foot, but no problem for someone aerobically fit as me. The stairs were an extra precaution, because a homeless musician might be remembered if spotted riding the elevator.

Reaching the ground floor, I eased open the door and searched the building’s lobby.

Any possible onlookers would see an innocuous street guy taking a shortcut across the marble-floored foyer, headed for a rear door that exited to the parking lot. Hurrying between rows of cars and past the next building on NE 3rd Avenue, I strode north toward my beige Honda CRV. It sat at the curb with eight minutes still on the meter. My backpack and gun case found the floor in front of the back seat. A moment later, I slipped into the driver’s side, started the engine, and hustled north on NW 2nd Avenue, heading for Interstate 395.

The first move of many to come—Miami about to become the center of panic again, and it would stay that way until the completion of this mission.

Speculation would abound about my motive, but I doubted anyone would come close to my real goal. Even the famed Detective Al Warner was unlikely to make this connection.

I sighed. Time is in short supply, but I have to get it done. No excuses. The next round of kills will be the one that counts, but I can’t stop there if I’m to continue misdirecting the cops. This is different from anything I’ve ever done for hire.

I contemplated my next move as I sped north, now on I-95. After things cooled for a few days, I’d head for Hollywood in south Broward County. Its main library was one I’d not yet visited. I took obsessive care not to leave any pattern or Internet trail for some clever detective to discover.

A blond wig and a pair of uncorrected tortoise-shell glasses were in a small bag on the passenger seat. Every library required the use of a different disguise.

Once this is over, life should return to my new normal. Had it only been six months? I shook my head and breathed another sigh.

Such unreasonable schedule restrictions. I grunted. Careful planning and sharp execution would triumph, as always. I’ve been on a tight wire more than once. Anyone getting in the way would not make it out alive. 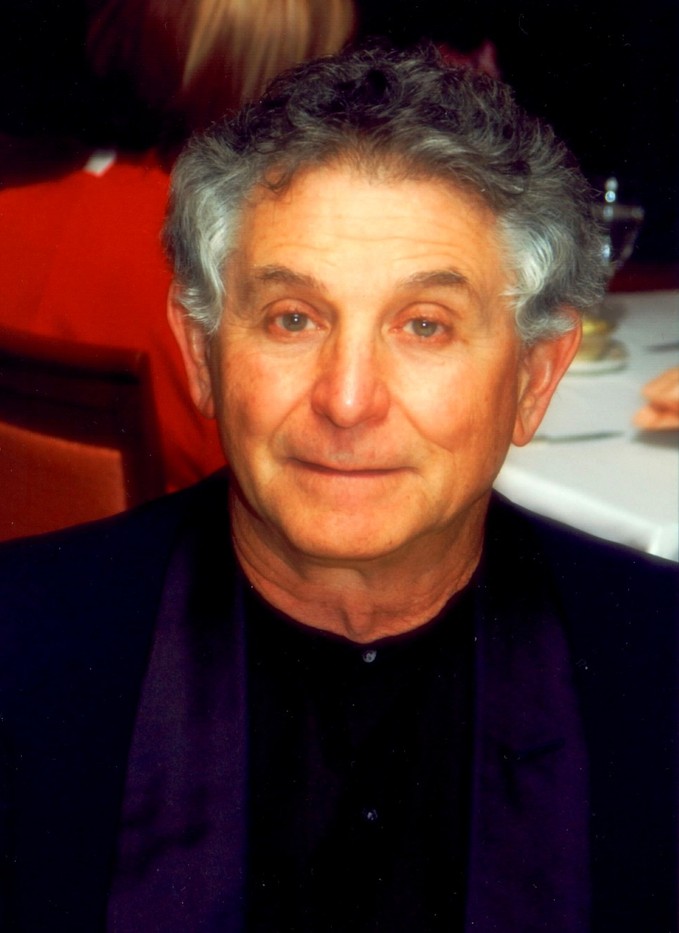 "Sniper" is the fifth of his Detective Al Warner Suspense series, with the first four; "Death’s Angel;" "Born to Die;" "The Prom Dress Killer;" and "White Death" all garnering rave reviews. His Detective Al Warner has attracted many fans, with readers likening Warner to James Patterson’s Alex Cross.