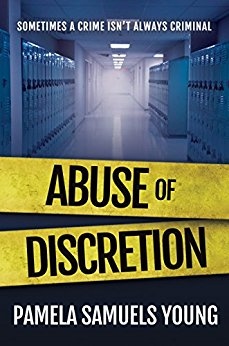 A Kid’s Curiosity … A Parent’s Nightmare
The award-winning author of "Anybody’s Daughter" is back with an addictive courtroom drama that gives readers a shocking look inside the juvenile criminal justice system.

Graylin Alexander is a model fourteen-year-old. When his adolescent curiosity gets the best of him, Graylin finds himself embroiled in a sexting scandal that threatens to ruin his life. Jenny Ungerman, the attorney hired to defend Graylin, is smart, confident and committed. She isn’t thrilled, however, when ex-prosecutor Angela Evans joins Graylin’s defense team. The two women instantly butt heads. Can they put aside their differences long enough to ensure Graylin gets justice?

Unbeknownst to Angela, her boyfriend Dre is wrestling with his own drama. Someone from his past wants him dead. For Dre, his response is simple—kill or be killed.

Other Books in the Dre Thomas Series:

Waverly Sloan is a down-on-his-luck lawyer. But just when he's about to hit rock bottom, he stumbles upon a business with the potential to solve all of his problems.

In Waverly's new line of work, he comes to the aid of people in desperate need of cash. But there's a catch. His clients must be terminally ill and willing to sign over rights to their life insurance policies before they can collect a dime. Waverly then finds investors eager to advance them thousands of dollars—including a hefty broker's fee for himself—in exchange for a significant return on their investment once the clients take their last breath.

The stakes get higher when Waverly brokers the policy of the cancer-stricken wife of Lawrence Erickson, a high-powered lawyer who's bucking to become the next U.S. Attorney General. When Waverly's clients start dying sooner than they should, both Waverly and Erickson—who has some skeletons of his own to hide—are unwittingly drawn into a perilous web of greed, blackmail and murder.

Is Anybody's Daughter Ever Safe?

Based on the real-life horrors faced by thousands of girls, award-winning author Pamela Samuels Young takes readers deep inside the disturbing world of child sex trafficking in a fast-paced thriller that educates as much as it entertains.

Thirteen-year-old Brianna Walker is ecstatic. She's about to sneak off to meet her first real boyfriend—a boyfriend she met on Facebook. But Brianna is in for a horrifying surprise because her boyfriend doesn't exist. Instead, Brianna unwittingly becomes the captive of a ring of drug dealers- turned-human traffickers who prey on lonely girls from dysfunctional homes. But they’ve made a big mistake in targeting Brianna because she doesn’t meet either of those criteria.

Brianna’s Uncle Dre, a man with his own criminal past, is determined to find the niece who is more like a daughter to him. Rather than sit back and rely on police to bring Brianna home, Dre scours the dark corners of Los Angeles looking for her. He is stunned to learn that the trafficking of children isn’t just happening in other countries. It’s occurring at epidemic levels right in his own backyard.

Dre is not alone in his desperate search. Loretha Johnson knows this world well. A social worker who previously lived “the life,” Loretha now dedicates her time to saving as many young girls as she can find. She turns out to be an invaluable resource for Dre, who ultimately gets a lead on The Shepherd, a mastermind in the trafficking world whose every move is fueled by ego and greed. Dre vows to bring his reign of terror to an end.

While Brianna makes a futile effort to thwart her captors, Dre is getting closer and closer to finding her. The woman he loves, attorney Angela Evans, knows the dangers faced by sexually exploited children because she represents them in juvenile court. Angela lends her moral support and, eventually, an important clue to Brianna’s whereabouts.

As he races against the clock, Dre ultimately comes up with a daring plan—one that puts many lives in danger, including his own. But will he find Brianna before it's too late? 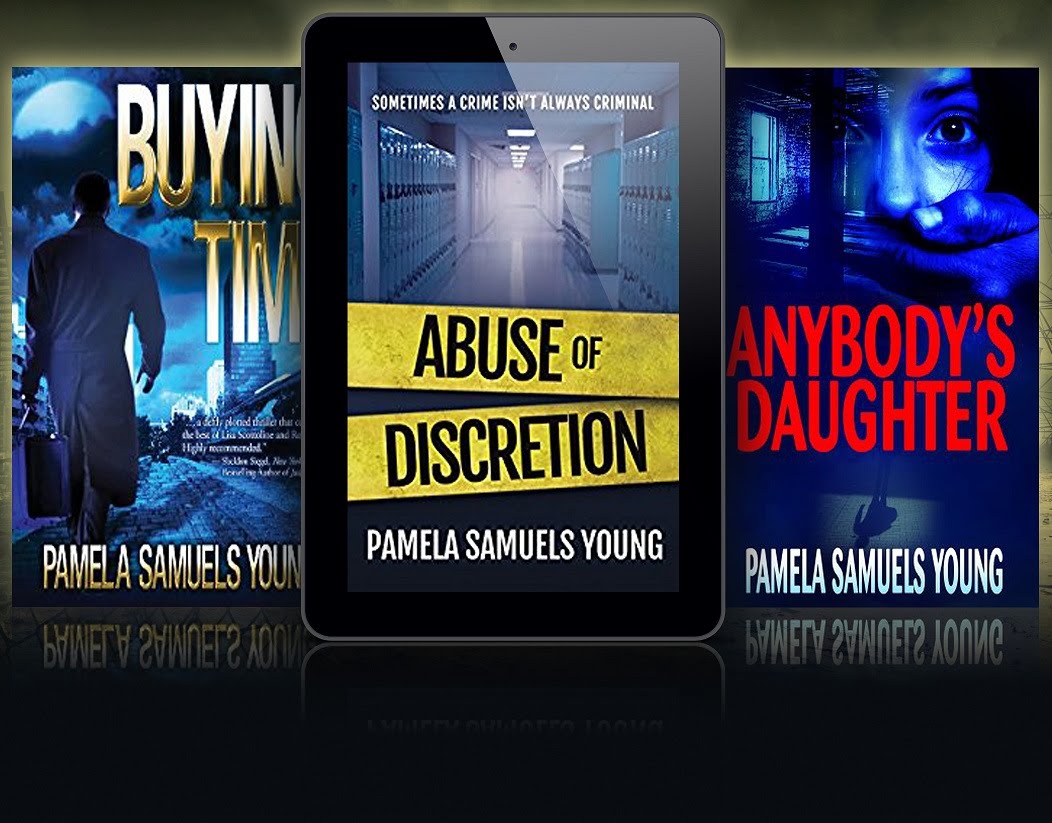 Graylin
“What’s the matter, Mrs. Singletary? Why do I have to go to the principal’s office?”
I’m walking side-by-side down the hallway with my second-period teacher. Students are huddled together staring and pointing at us like we’re zoo animals. When a teacher at Marcus Preparatory Academy escorts you to the principal’s office, it’s a big deal. Nothing like this has ever happened to me before. I’m a good student. I never get in trouble.
Mrs. Singletary won’t answer my questions or even look at me. I hope she knows she’s only making me more nervous.
“Mrs. Singletary, please tell me what’s wrong?”
“Just follow me. You’ll find out in a minute.”
I’m about to ask her another question when it hits me. Something happened to my mama!
My mama has been on and off drugs for as long as I can remember. I haven’t seen her in months and I don’t even know where she lives. No one does. I act like it doesn’t bother me, but it does. I’ve prayed to God a million times to get her off drugs. Even though my granny says God answers prayers, He hasn’t answered mine, so I stopped asking.
I jump in front of my teacher, forcing her to stop. “Was there a death in my family, Mrs. Singletary? Did something happen to my mama?”
“No, there wasn’t a death.”
She swerves around me and keeps going. I have to take giant steps to keep up with her.
Once we’re inside the main office, Mrs. Singletary points at a wooden chair outside Principal Keller’s office. “Have a seat and don’t move.”
She goes into the principal’s office and closes the door. My head begins to throb like somebody’s banging on it from the inside. I close my eyes and try to calm down. I didn’t do anything wrong. It’s probably just—Oh snap! The picture!
I slide down in the chair and pull my iPhone from my right pocket. My hands are trembling so bad I have to concentrate to keep from dropping it. I open the photos app and delete the last picture on my camera roll. If anyone saw that picture, I’d be screwed.
Loud voices seep through the closed door. I lean forward, straining to hear. It almost sounds like Mrs. Singletary and Principal Keller are arguing.
“It’s only an allegation. We don’t even know if it’s true.”
“I don’t care. We have to follow protocol.”
“Can’t you at least check his phone first?”
“I’m not putting myself in the middle of this mess. I've already made the call.”
The call? I can’t believe Principal Keller called my dad without even giving me a chance to defend myself. How’d she even find out about the picture?
The door swings open and I almost jump out of my skin. The principal crooks her finger at me. “Come in here, son.”
Trudging into her office, I sit down on a red cloth chair that’s way more comfortable than the hard one outside. My heart is beating so fast it feels like it might jump out of my chest.
The only time I’ve ever been in Principal Keller’s office was the day my dad enrolled me in school. Mrs. Singletary is standing in front of the principal’s desk with her arms folded. I hope she’s going to stay here with me, but a second later, she walks out and closes the door.
Principal Keller sits on the edge of her desk, looking down at me. “Graylin, do you have any inappropriate pictures on your cell phone?”
“Huh?” I try to keep a straight face. “No, ma’am.”
“It’s been brought to my attention that you have an inappropriate picture—a naked picture—of Kennedy Carlyle on your phone. Is that true?”
“No…uh…No, ma’am.” Thank God I deleted it!
“This is a very serious matter, young man. So, I need you to tell me the truth.”
“No, ma’am.” I shake my head so hard my cheeks vibrate. “I don’t have anything like that on my phone.”
“I pray to God you’re telling me the truth.”
I don’t want to ask this next question, but I have to know. “Um, so you called my dad?”
“Yes, I did. He’s on his way down here now.”
I hug myself and start rocking back and forth. Even though I deleted the picture, my dad is still going to kill me for having to leave work in the middle of the day.
“I also made another call.”
At first I’m confused. Then I realize Mrs. Keller must’ve called my granny too. At least she’ll keep my dad from going ballistic.
“So you called my granny?”
“No.” The principal’s cheeks puff up like she’s about to blow something away. “I called the police.” 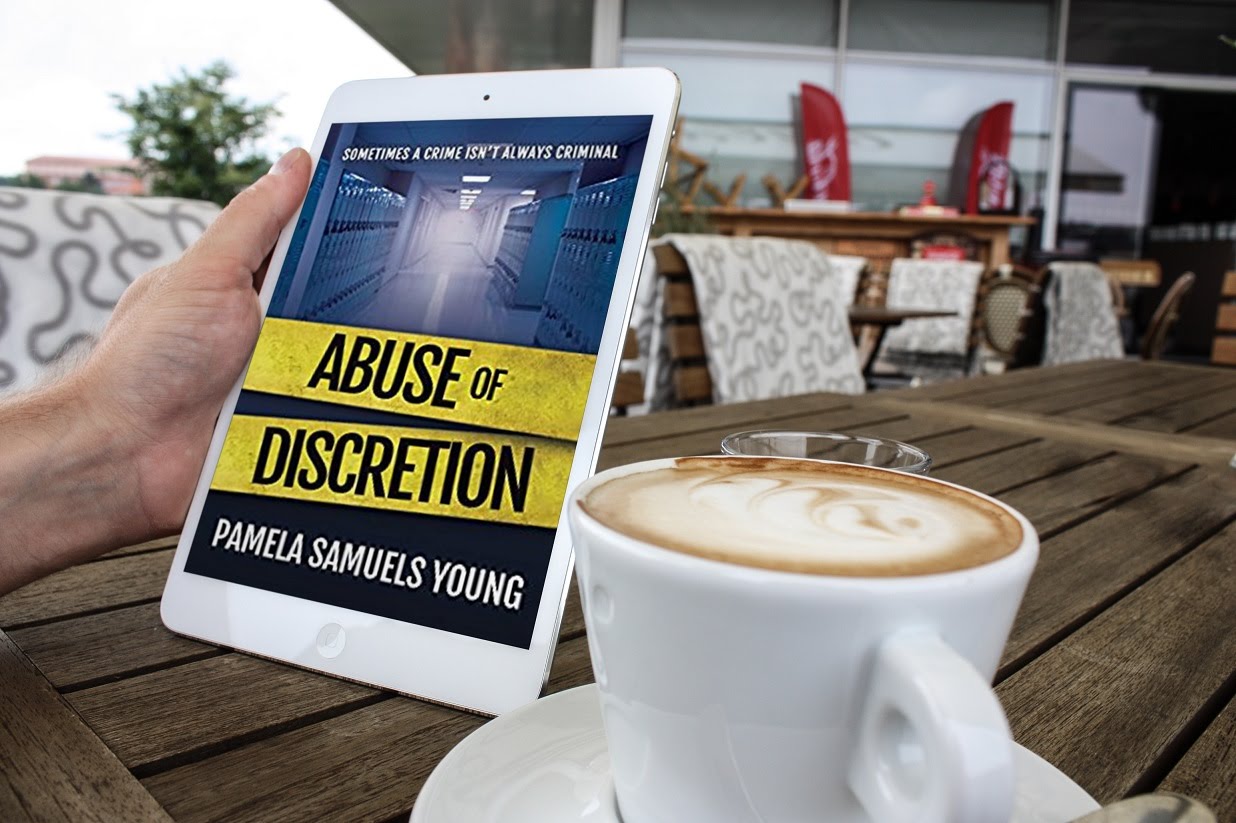 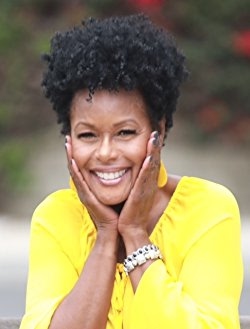 Pamela Samuels Young is an attorney and award-winning author of eight legal thrillers. Her most recent courtroom drama, Abuse of Discretion, tackles a troubling sexting case that gives readers a shocking look inside the juvenile justice system. Pamela is also the recipient of an NAACP Image Award for Outstanding Fiction for her thriller Anybody’s Daughter. The former journalist received a bachelor’s degree from USC and also earned graduate degrees from Northwestern University and UC Berkeley School of Law. She is a frequent speaker on the topics of child sex trafficking, online safety, fiction writing, and pursuing your passion. To invite Pamela to a book club meeting or speaking engagement, visit her website