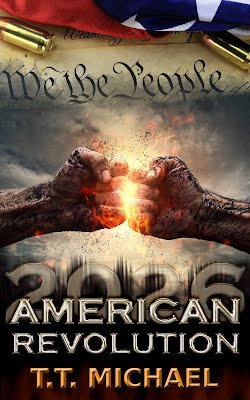 Dystopian, Sci-Fi, Futuristic
Date Published: January 2018
When Kelvin Hanson is dishonorably discharged from his naval captaincy he doesn't connect the events to the accession of new President Diego Silva. But as he researches further he finds that Silva isn't as he appears. Determined to rid the nation of a corrupt president, Hanson plots to assassinate him, but someone else gets there first.
Ashlee Townsend, head of the non-profit Freedom Group is equally determined to get to Silva, and is as surprised as Hanson when someone pips her to the post. Still reeling from the President's assassination, Hanson and Townsend join forces as a military dictatorship takes over the country.
As rumors of terrorist plots and Mexican invasions fly, Hanson's journalist wife sets the story straight, finding that it was the military themselves that assassinated Silva. As the truth comes out, California secedes from the Union, and Hanson and Townsend find themselves fleeing to Sacramento to head up a rebellion force.

Reuniting the states under a democratically elected President means war. And while Hanson heads up the rebel forces, his wife Kishanna deals with propaganda and information, and Ashlee becomes the center of yet another assassination plot.
This time, however, things go differently. And with a dead dictator, the threat of civil war crumbles. The governor of California becomes the interim President, and Hanson decides to throw his hat into the ring for the coming election. Democracy triumphs, and the United States is united once more.

Perhaps you wouldn’t characterize the Finance Manager of your local automobile dealership as an Amazon best-selling author—until you get to know T.T. Michael. He has worked for the past decade at a Toyota Dealership in Illinois, but he is in the driver’s seat as the writer of, Fire War, a political thriller set in the year 2076. See what happens when the United States, Canada, and Mexico all join forces to make one super country. See more about him and his book Fire War at www.ttmichael.com