Tour Kick Off: A Gift and a Curse: Renata's Story by Stephanie Deniese Brown @iptlr #giveaway 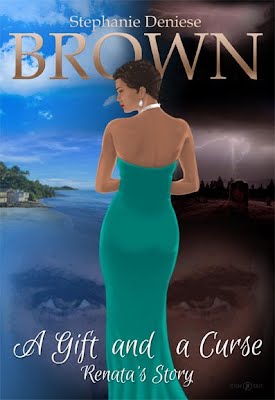 What does one do when your mind says go but your heart says stay?

In Stephanie Deniese Brown's third installment of her Wesson Family Saga, newly divorcee, Renata McKain-Christian learns if giving it up all in the name of love is either the best gift she'll ever receive or the curse she rather not face.

Renata, fresh off a divorce and ready to start a new life, with no distractions, finds immediate trouble the second she accepts a job from Carson Becker. Carson is established, powerful, and most of all rich. All the things Renata is not and that makes her feel unworthy of his love. But Carson doesn't care about her pocketbook, he sets out to capture Renata's mind, body, and soul. Just as he gets Renata to let her guard down and things start sizzling in the boardroom and the bedroom, secrets are unleashed that threaten to take away everything these two have built.

When power and insecurities threaten a relationship everything comes down to figuring out if the love you share is really a gift or a curse.

Stephanie Deniese Brown, a native of Hampton, VA has always loved creative writing. From romance to mystery, she has dipped her pen in all styles of writing.

Stephanie began writing her first novel when she was 21 years old. At first the story was for recreational purposes and was meant to live in Stephanie's computer. After researching how to publish a novel, Stephanie decided she wanted to release her masterpiece to the world. In 2005 she opened Independence Publishing, TLR and released "Skye's His Limit". The novel received high reviews from readers and Stephanie went back to the lab and released the second installment in her series, "Sable's Karma...The Secret's Out" in 2008. The novel placed as a finalist in the National Indie of Excellence Book Award. After a ten year hiatus, Stephanie is back on the scene and is releasing the highly anticipated third installment of the Wesson Family Saga.

Stephanie currently resides in Richmond with her husband, children, and her adorable cat CiCi.