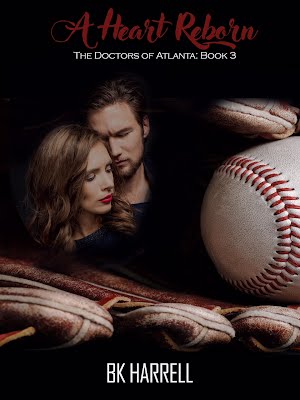 Dr. Sarah Buckley is living her dream.  After completing her OB/GYN residency, she is now an attending physician with Atlanta Women’s Health Center.  Thanks to her bosses, Drs. Lincoln Montgomery and Cole Ryan, she has finally turned her life around.  However, she still harbors a deep dark secret that only those closest to her know.  Ten years ago, Sarah met the man of her dreams.  He was her first everything, first date, first kiss, first lover.  After running away from him, he has haunted her dreams as she has tried to avoid him and her secret.

Harrison Cooper has it all, or so he tells himself.  All-star third baseman for his beloved hometown Atlanta Braves, multi-million-dollar contracts and women throwing themselves at his feet, but it was the angel who flew away so many years ago that he can’t let go of.  He wears the ring that was to be hers as a reminder of the love he has held onto, but all of the searching in the world has not led him back to her.

The birth of his best friend Rhett’s first child finally leads him back to a chance encounter with the one person he can’t forget or stop loving.  As her usual actions, she runs away leaving Harrison with a stinging jaw and at a loss for words.  Committed to staying with his team until the end, he gambles his future with the new owners for a chance to talk to Dr. Sarah Buckley.

It’s the bottom of the ninth and the bases are loaded for love.  Will they strike out or hit a grand slam, or will the secret Sarah’s been harboring tear them apart forever?

This is the third book in the Doctors of Atlanta Series.  Come back to share the laughs, tears and love with the gang as Marcie and Cole tie the knot and maybe Harrison and the Braves will finally be winners again…

BK Harrell is former Navy physician who has had a long love of writing.  He specializes in medical, military and sports romance writing.  He began seriously writing while deployed to Afghanistan in 2012 and has never looked back.  Whether he is teaching, serving his country, educating people about the fine art of cigars, practicing medicine or spending time with friends and family he uses his diverse background to shape the world around him through words.  Currently he writes the Doctors of Atlanta Series, Sapphire Kindle World Novellas and launching in late 2018 Ashton’s Ferry a small-town romance series.
He uses his unique experiences and love of all things Atlanta, University of Georgia and sports to weave intricately detailed stories focused on Atlanta and the surrounding areas.  His goal is to bring the same joy and excitement he sees in his own city to the readers and to allow them to experience the city through his eyes.
Dr. Harrell is married to his beautiful wife Erin, a proud graduate of Auburn University, which makes multiple appearances in his books, and their wonderful one son.  Dr. Harrell is a native of Augusta, GA and a proud graduate of the University of Georgia, Emory University, and proud to have been a member of the first ever graduating class of Georgia Campus Philadelphia College of Osteopathic Medicine.  He currently resides in the Atlanta area where he practices medicine and raises his family.