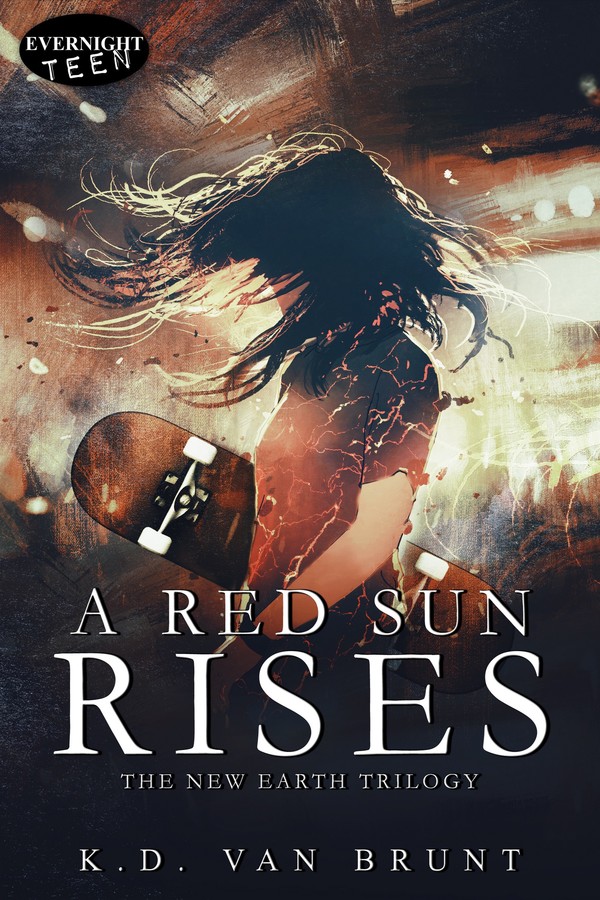 When the end of the world comes . . . face it on a skateboard

Nine years ago, an unknown poison called the “Red” saturated the atmosphere of the entire planet, killing off everyone except a remnant of immune survivors. Jake is a survivor, but the Red has left its mark on him, changing him in strange ways he does not understand. The answers to his questions, however, will not be found inside the gated confines of his small community.

Jake and his group are not the only survivors. A handful of non-immune scientists and their families also escaped death by retreating inside a giant underground bunker called the Hole. Unable to breathe the outside air, the inhabitants of the Hole search for a way to fix the air and save the species.

Seventeen-year-old Paige grew up in the Hole, skateboarding its hallways and chambers. Life underground is all she knows. Trained as a medic, her day job is helping find a way to cleanse the atmosphere and restore the balance of nature.

Paige and Jake live in different worlds, each seeking answers that seem impossible to find. Everything changes when their lives collide in a chance encounter. Paige realizes that Jake may hold the key to defeating the Red, and Jake, in turn, realizes that Paige and her people may have the answers about where he came from and why he is what he is. With time running out, the two rush to uncover not only what the Red really is, but also the strange connection growing between them.

When dusk arrived, Jake slowed his bike and began to search for a place to hole up for the night. He stood in unknown territory and had no intention of risking night travel when God knew what creatures might lie in wait for a stupid human to stumble into their claws. In the distance, lightning spiked through the night sky, and the wind had picked up, swirling around leaves and bits of debris that littered the crumbling interstate.
Bad storm coming. Another reason to shelter for the night.
Jake began searching for a place out of the weather, thinking that a nice abandoned SUV might work. He balked at exiting the freeway and wandering around the surrounding suburbs. The I-95 had five lanes in each direction, thus providing a broad, flat expanse all around him that would make it difficult for anything to approach without being seen or heard.
Eventually, Jake found a black Peterbilt tractor trailer with a sleeper cab parked on the shoulder. Its driver’s side door dangled half-open, leaves and dirt caked the windshield, and a dead seagull corpse lay mummified on the hood. Undeterred by the moldy smell emanating from inside, he climbed into the cab, stepping gingerly in case his foot broke through the rusted-out floorboards. Then he leaned around the front seat to look into the sleeping area behind it to see if it was a suitable place to rest for the night. With a strangled cry, he threw himself backward out of the cab and landed on his butt on the pavement, where he immediately lost his dinner in several, gut-wrenching heaves. Inside the sleeper compartment, lying on the bed, was a body, or what was left of a body: bones, teeth, tattered clothing, and tufts of red hair.
Whoa there, calm down. It’s just a Red body. You’ve seen hundreds.
Yes, he had. But it had been years and years since those early days when dead people clogged hospital parking lots and churches and airports. Long-buried memories of his journey through silent city streets before the people of Edentown found him flared to life, causing him to shudder.
After picking himself up off the asphalt, Jake walked to the back of the dull aluminum trailer the truck had once towed. He had no desire to step foot inside the cab ever again, thank you very much. He flung open the rear doors and, seeing no surprises, climbed inside, dragging his bike up after him. He half-expected the cargo hold to be jammed full of now-useless consumer goods, like computers or iPads, but the entire trailer sat empty and smelling of kerosene. The sound of his breathing echoed faintly through the cavernous interior. He decided to rest inside this giant metal tomb tonight, but not anywhere near the cab. Yes, he had experienced gross all too often, but he had no desire to bed down next to it.
As usual, sleep was a joke, so he closed his eyes and relaxed his muscles, and before long, his mind slid into waking dreams about the day-to-day mundanities of life in Edentown. Like a video replay, he relived helping Cyndi chop vegetables and stir the soup pot. He revisited his eleven-year-old self on the morning after the great January blizzard, when the snow piled up so high it nearly buried the vehicles left outside. He remembered the many evenings spent in the big house sitting before the hearth playing checkers with Carl. But his meandering reflections cut off and his eyes jerked open at the sound of a mournful cry that almost seemed human. The wail went on for several seconds before fading away. A call for help maybe? A defiant challenge? Either way, he quickly resolved not to leave the trailer until dawn, although he bit his lower lip at the realization that the sound had come from directly ahead of him. Tomorrow, he would pedal head-on into whatever vomited out those screams in the night.
With unease churning away in his gut, Jake crept over to the trailer door that he had left cracked open and eased it shut, interring him inside the empty semitrailer. Once he settled down again with his back to one wall, he closed his eyes and tried to relax. It didn’t work. Minutes later, he felt a tingling sensation spring up in the back of his brain, as if tiny worms were crawling around on the surface of his cerebral cortex, but the experience felt more mental than physical. Then images flashed through his mind. They came and went so fast, he couldn’t figure them out, although he picked out parts of some of them: a dark hole under an abandoned building, a dog, the severed leg of some animal, and a swarm of rats. The montage flickered by for several seconds before disappearing, leaving him confused and disturbed.
What the hell was that? Am I going insane?
The rest of the night slipped by without incident, and he spent the remaining hours of the dark poking and prodding at the elements of his plan for tomorrow. Wilmington, Delaware lay only a few miles away, so in the simplest iteration of tomorrow’s events, he’d zip in, find the diner, zip out, and beat a hasty retreat toward Edentown by lunchtime. If he rode hard, he could be back in time for dinner, although Carl doubtlessly would rip him a new one. He didn’t care. Other iterations were more complex. The biggest variable in his plan? The fact that he didn’t really know where Pete’s Diner was. The second biggest variable? Monsters and mind freaks. He considered them second because he thought—or maybe only hoped—that bad things avoided the day and only came out at night. Normally a true statement for the creatures around Edentown, but who could say what new and different predators prowled the empty urban landscape around him. 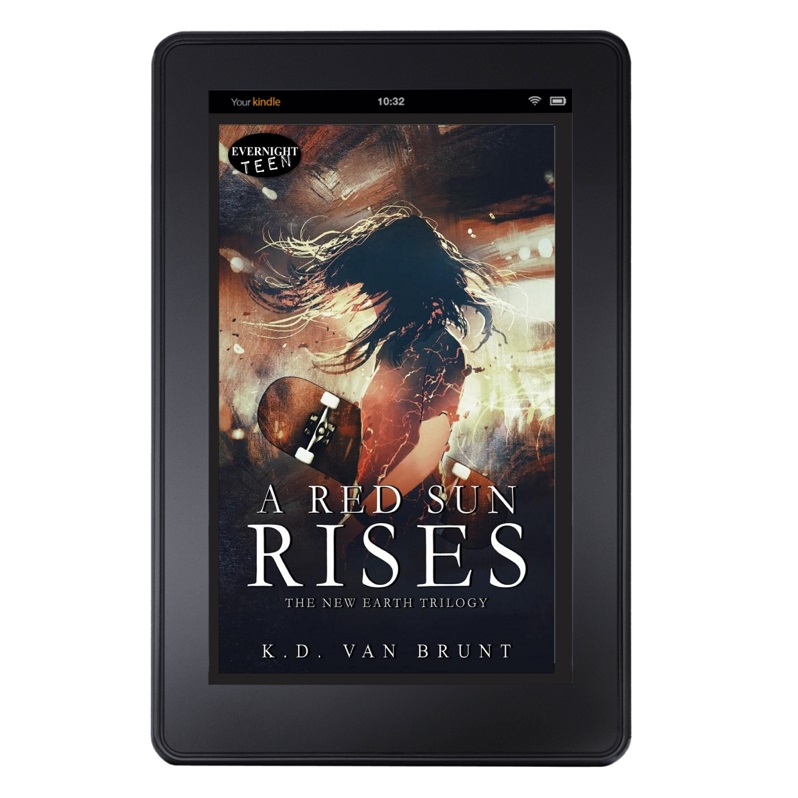 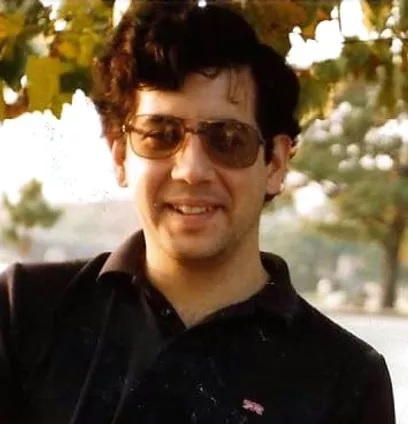 K.D. Van Brunt is the author of the well-received Win the Rings trilogy. A Red Sun Rises is the exciting first book of his latest trilogy. When not lost in space, his day job is lawyering in Baltimore.