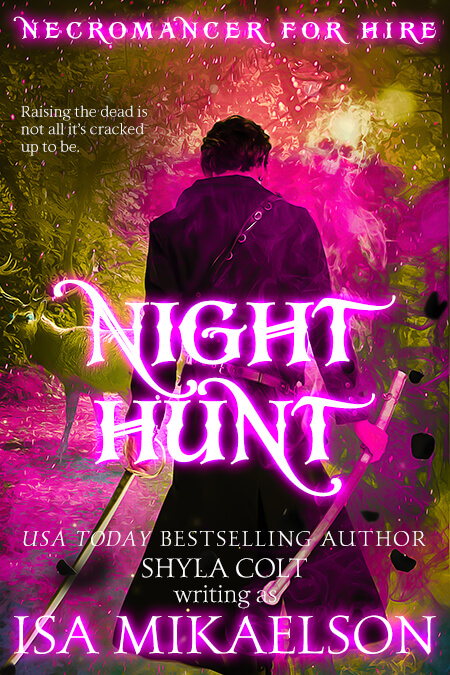 Called back to his small town in Washington for a funeral, Ezra Zaan finds himself exactly where he doesn’t want to be … in the middle of paranormal problems with the vampire ex who broke his heart. The new owner of the Book of the Dead, Ezra’s tasked with defending the town against the Night’s Huntsmen—a deadly group of ghostly hunters who run a magical competition that ends in death and ruin for all paranormal beings. It is set to begin, and the only way to survive is if the factions of witches, vampires, and shifters band together.

Which is easier said than done when their hatred has them at each other’s throats. Investigating the breaches in the veil between their world and the other, they uncover a conspiracy that threatens to tear them apart.

It’s a race against time and their own tangled past as they prepare for the battle of a lifetime.

Inside of the house is a reenactment of Poltergeist. Things rattle against tables and in cupboards. Random items float in the air. I watch as a candle bobs its way across the room. Rushing wind travels through the house, turning it into a giant wind tunnel. I stare at the couch, slack-jawed. Mother’s body hovers in midair, arms crossed over her chest, and hair stands up as if she’s submerged in water.
“Is she okay?” I yell to Ari over the noise.
“I don’t know.” His voice cracks. The sound of fear sets me into motion. Fighting against the concentrated bubble of air surrounding her, I inch closer. Licks of energy strikeout, shocking me. Embracing the pain, I battle my way to her side. Her eyes are wide open but rolled back into her head to reveal pure white. A translucent, multi-colored cocoon surrounds her.
“It’s not hurting her.” I shake my head as I monitor her. “It’s just disconcerting.”
A scarlet strand wraps around me and releases a jolt of electricity. Crying out, I hit my knees. Convulsions rock through me. I clench my teeth. The lights flicker off and on. I register my brother’s anguished cry seconds before I lose control of my body. Thrust into the backseat of my brain as a new driver takes over, I watch myself like a spectator.
“Come to me.” An incessant voice whispers to me with words that are a command. Turning away from my levitating mother, I walk past Ari’s prone body on my way to the basement entrance, fully aware this is an astral trip. A glowing white light illuminates the line under the door. Opening the heavy door, I’m stunned by the transformation. White mist creeps up the stairwell like a fog. The source of the white light is a massive Ankh that sits high in the air casting down beams.
“Come.”
The room transforms into a hallway straight out of ancient Egypt. Cuneiform etched in the beige stone walls tells a story I can’t translate. The air is musty and cool. Hallways branch off on the left and right, leading to rooms with detailed drawings, and long rectangles that must house sarcophaguses. I’m in a pyramid.
Torches line the walls. I turn to the left down a corridor. A dark figure looms ahead on an elevated stone altar. As I draw closer, pointed ears, an elongated snout, a gold head, and onyx headdress with silver ankhs come into focus. The image identifies the being as Anubis, the Egyptian God of Death.
A broad layered wesekh collar laden with precious gemstones drapes from shoulder to shoulder, emphasizing his thick neck. Ornate golden cuffs adorn his forearms, and wrap skirt of the same color reveals powerful thighs and legs. He’s like a bodybuilder on steroids, only leaner. His muscular humanoid form and jackal-like face are at odds and seamlessly blended under a glossy black coat of fur-covered skin.
If ever I was going to evacuate my bowels, now would be the time. A black staff with a golden serpent head is clutched in his left hand. Unsure how to proceed, I stop a few feet away from the bottom of the dais.
“Come forward, child of Anubis.” I can’t help but focus on his wicked sharp teeth as he speaks.
Confused, I wrinkle my brow. I don’t worship him.
“All who wield the power of death belong to me.” His deep voice has a guttural tone impossible to ignore.
My legs move, carrying me with them against my better judgment.
“You are the appointed keeper of my secrets. I expect you to serve me well and protect this book with your life.” A large, black tome appears in his hand. Worn with age, the leather is nearly white in spots. Ankhs and scarabs are carved into the cover, but it’s the golden Amenta that catches my eye. The upside-down half circle with two lines that resemble blood trails represent the underworld. “It will open only for you.” The book floats toward me, and I’m relieved that I won’t have to get any closer to the fierce figure.
“Thank you.” I bow in respect.
“You’ll find ownership of this book to be both a blessing and a curse. Wield its power with care. The balance must be kept above all.”
“I understand.” I take the book, and I’m yanked back the way I came by an unseen force. Clutching the book to my chest, I close my eyes to block out the blurring scenery around me.

Isa Mikaelson is a USA Today Bestselling author starting a new Penname for YA. She lives in Cincinnati with her two daughters and husband. She is known for her strong female leads, detailed fantastical worlds, and compelling romance infused plots. Her mind is a treasure trove of paranormal, historical, and various other random facts.