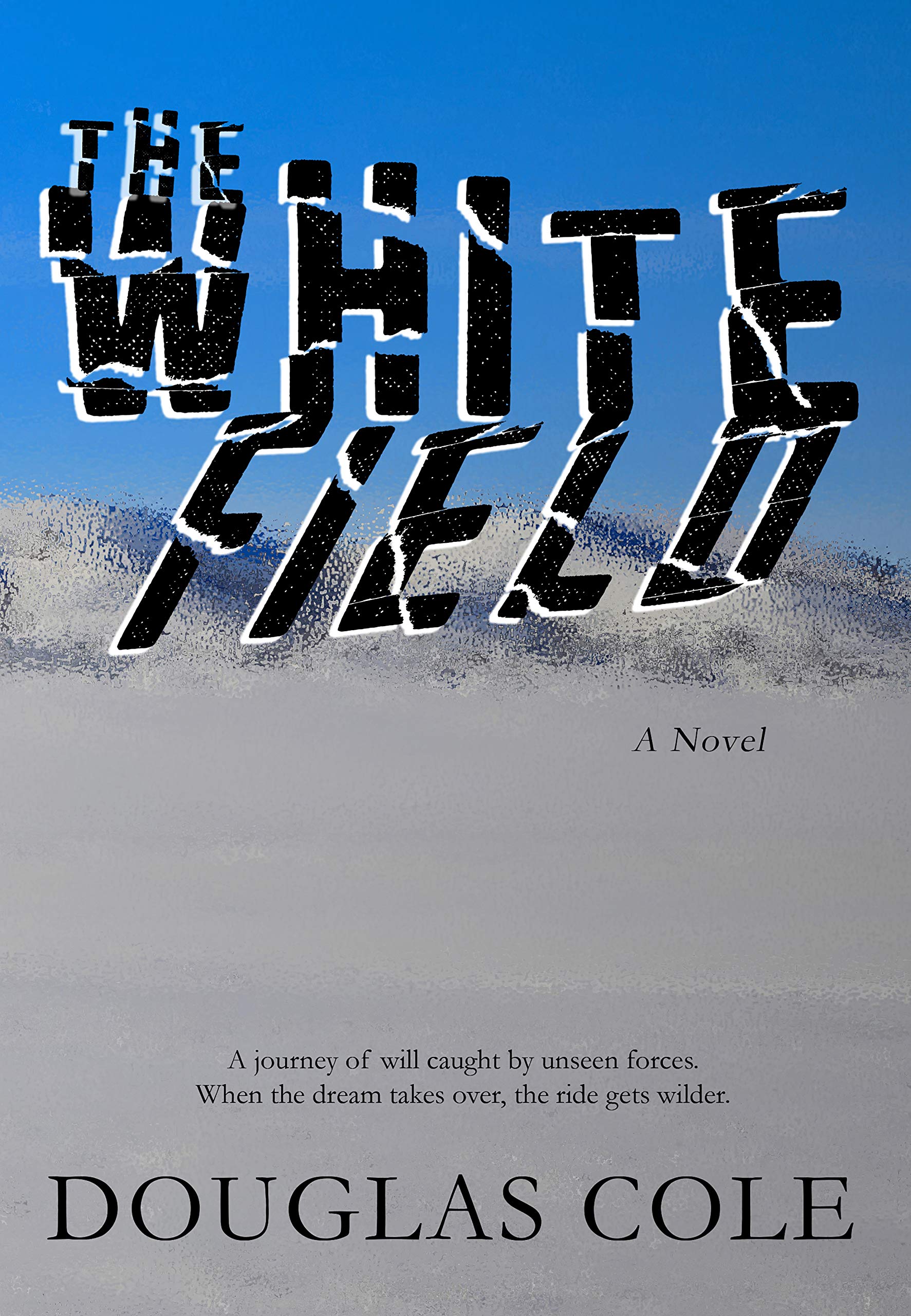 The White Field is a fast-paced journey of a man, Tom, fresh out of prison and trying desperately to rebuild his life. But he is caught by mysterious, unseen forces beyond his knowledge or control. After his release from prison, he is dropped back into the world in the wastelands of the city. In the menial work afforded the underclass, he begins his new life among characters at the edges of society, dwellers of the netherworld such as Raphael, a former cop from Mexicali singing Spanish arias in the mists of the industrial night among drug addicts and crooked cops; Tony, a stoner scholar with an encyclopedic knowledge of history based solely on the intricate study of rock and roll; and Larry, the bloated, abusive manager trapped as much as his workers in a world of tedium and repetition and machines. Think, The Three Stooges on acid. Unable to reconnect with what’s left of his family, Tom embarks on a criminal path more harrowing than the one that led him to prison in the first place. Lured in by the nefarious, Thane, he slips into a plan that will leave him with no way back. And with no place left in this world to go but prison, he makes one last run for freedom. Will he escape?

Praise for The White Field:

“Author Douglas Cole’s breakneck prose places us squarely in the hectic mind of a man influenced from all sides, seeking a life free from fear. The result is a stunning narrative that is simultaneously frightening and familiar.” —Kerri Farrell Foley, Managing Editor Crack The Spine. 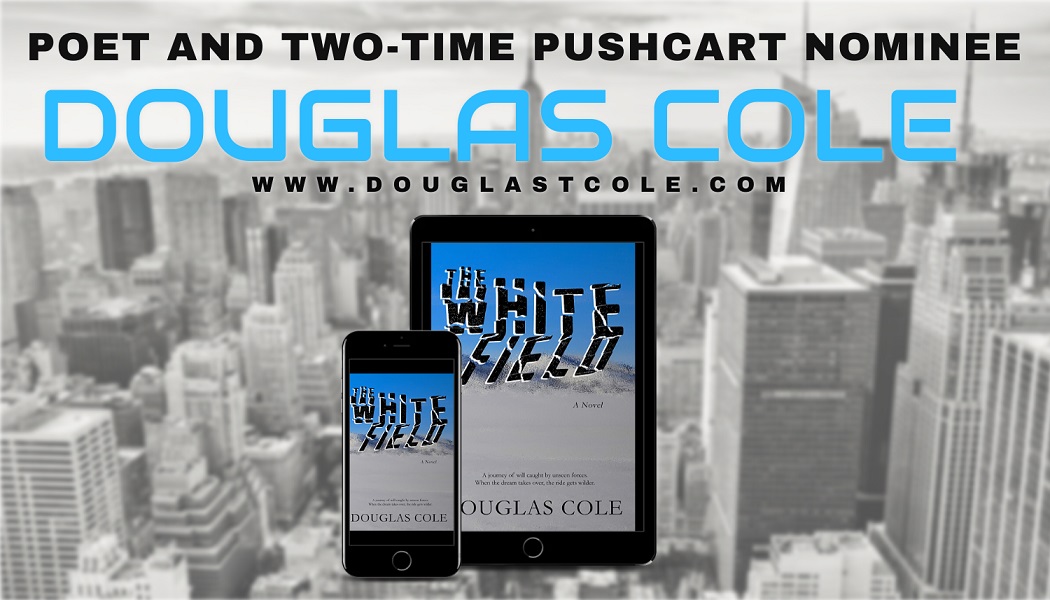 I walked into the sun. It seared the road and the rooftops, intense, blinding. I went up Eighty-Eighth Street through the homes and the old elms with their heavy summer growth and darkness along their limbs, light strobing through the shadows. I knew someone might recognize me. They might even call the police. But I couldn’t resist. I was free, now. Nobody could touch me.

Only those who cared, and by now there were none, would have known my release date. My wife may have known. At one time, I imagined her writing it on a wall calendar, marking off each day leading up to it with a big, black X. But I knew I’d fallen far from her thoughts.

I couldn’t be sure of my children, though. They were so young when I went in they could have forgotten all about me. My wife had remarried. Very likely they called her new husband daddy. Very likely, they thought he was. Events had erased me. After all, I’d made no contact. And while I had no idea what my wife might have told them, unless she’d changed in ways I couldn’t foresee, I knew she’d tell them the truth if they asked and say nothing if they didn’t. At worst, they believed I was dead.

And that life seemed like something unreal. There were no traces of it around here. But my sense of time was way off. From counting, literally, minutes as they passed, I went into a vast timeless trancezone where whole years vanished. In the midst of this, I reemerged from time to time to peer into my little cell of life with seconds hanging like drops of water on a window ledge and refusing to fall. But now, walking this street, I was the last person anyone around here was expecting to see.

So, as I went up Eighty-Eighth to the old house, I had this strange feeling that I was invisible. In the dusk light, I saw the windows of the houses blazing. Commuters on their way home shot by and curved around the meridians in the intersections, their faces steel traps that snapped and flashed mirror eyes and grim lips and frenzy, frenzy for home, motion so fast they blurred into tracer ribbons. And the sun only cloaked me that much more. Even my shadow was a rail.

And I heard it, that high tension ping, like my own past ringing from the driveway and those days when I was a kid, too, playing into evening as our faces disappeared in the darkness with only the square of the backboard above and the black sphere of the ball and the heat and breath of the other players around me. Then I saw them, three boys playing basketball in the driveway. One was a tall gangly kid with long black hair and ripped jeans and a T-shirt with the word ENEMY printed on it. Another kid stood beside him, but the light made it hard to see his features. Then, the ball landed on the rim, bounced up, arced over to the other side of the rim, hung there suspended in the net for a moment and then dropped through. The third boy stood back from his shot with his hands on his hips, breathing hard, turning his head slowly as I saw, I swear, my own face there in front of me.

With a brow of concentration like a hawk’s predatory gaze, he looked at me as our eyes locked for an eternal moment that I thought carried some recognition, but the moment changed before I could read it.

Then, I was passing on, and my son returned to his game. 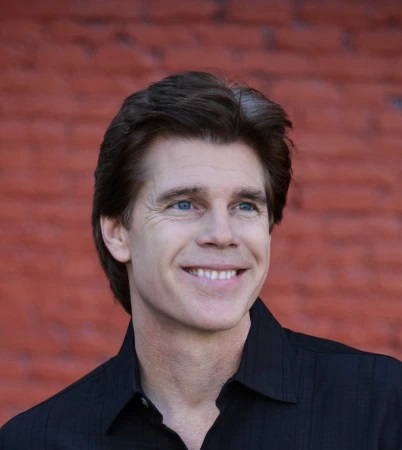 Douglas Cole has published six collections of poetry, a novella and has a novel, The White Field, coming out in September with Touchpoint Press. His work has appeared in several anthologies as well as The Chicago Quarterly Review, The Galway Review, Bitter Oleander, Louisiana Literature and Slipstream. He has been nominated twice for a Pushcart and Best of the Net and received the Leslie Hunt Memorial Prize in Poetry. He lives and teaches in Seattle. His website is https://douglastcole.com/.