Tour Kick Off: Third Chronicles of Illumination by @IlluminationCAP #giveaway 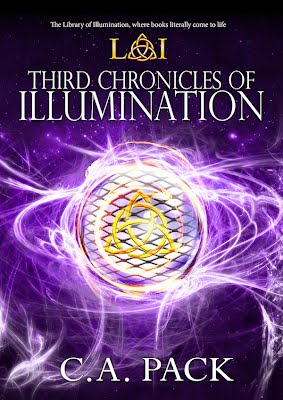 Oh, no! Johanna Charette and Jackson Roth have allowed a sneaky shapeshifter to slip right through their fingers. The good news is that he’s now trapped between the layers of time and space with their Terrorian nemesis, Nero 51. The bad news is the Terrorian wants to control all the Libraries of Illumination, while the shapeshifter wants to control everything else. Who knows how long the Illumini system will remain safe? It’s taking a toll on Johanna and Jackson, who are smack in the center of everything as they struggle to protect the libraries’ legacy. Can you spell s-t-r-e-s-s? The pressure is driving a stake between the teens, and their mercurial romance could be over before it has truly begun.

C. A. Pack is the author of the YA supernatural series Library of Illumination/Chronicles of Illumination, as well as the historical fiction, Code Name: Evangeline, and the fantasy, Evangeline’s Ghost.  She is an award-winning former journalist and television news anchor, working in the New York metropolitan area. The author is a member of International ThrillerWriters, and Sisters in Crime, and has formerly served as president of the Press Club of Long Island. She lives in Westbury, NY, with her husband, a picky parrot, and dozens of imaginary characters who constantly demand page space.
Contact Information
Website
Facebook
Twitter
Blog
Pinterest
Goodreads