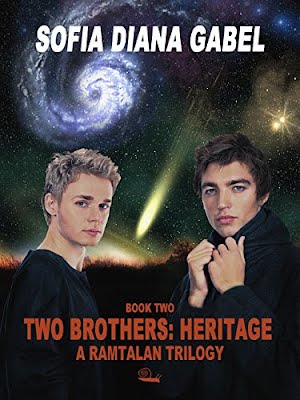 In the second book in the Ramtalan Trilogy, Argus Dachel, a far-from-ordinary half-alien teen, finds himself mixed up in the battle between a hostile faction of Invaders and the peaceful Ramtalans he's come to know as his friends. With his brother Tai held captive at the Citadel and disturbing news about his father, Argus has to come to grips with the truth about who he really is. Not only is the government agency, the Astronomical Urgent Recovery Administration, AURA, hot on his tail, but his relationship with his girlfriend Lola is in jeopardy. As his special abilities increase and become stronger, he risks exposure and capture. When the enemy closes in and the Citadel is attacked, it seems victory is impossible, but losing means certain death. He must find some way to protect everyone around him, but winning is impossible. Or is it?

Sofia Diana Gabel is a multi-genre fiction writer who was born in Sydney, Australia, but is now living in the United States with her family. With degrees in environmental science and archaeology, she enjoys being out in nature when she's not glued to her desk writing or researching a new story idea. Writing is a true passion of hers, born from a love of the written word that can transphttps://www.kobo.com/us/en/ebook/two-brothers-heritageort the reader to different places or worlds and deliver them back to reality, safe and sound.