Tour Kick Off: A Rumored Affair by @vikilynromance #mm #romance 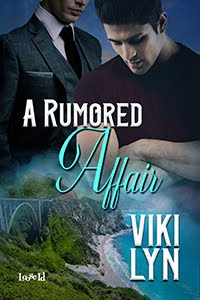 Vacationing at a gay resort is risky business for Winter Media’s CEO, Graham Winters. In negotiations for the purchase of an anti-LGBTQ publication, if found out he preferred men, the deal would collapse, along with Winter Media’s bottom line. But take a risk, Graham does. He can’t pass up two weeks where he can be himself.

But when Graham arrives at Secretus, there is no record of his reservation. Never one to take no for an answer, he coerces the owner of Secretus, Chris Katsaros, to let him stay in Chris’s home.

Winter Media owns one of the worst gossip rags in the country, so Chris has no choice but to agree to Graham’s terms. Chris keeps a low profile when it comes to Secretus, securing a safe environment where high profile gays can relax without media hounding their every move. An introvert by nature, Chris has a difficult time letting anyone into his life. As a foster kid, he had never experienced love until adopted by Pete and Bob.

Forced to entertain Graham, Chris finds they have more in common than he ever thought. The attraction between them is real, and Chris’s guarded heart begins to thaw.

Multi-published and award winner, Viki Lyn is a successful writer of gay paranormal and contemporary romance. After reading and collecting whatever she could get her hands on, she wrote her first male/male romance. And that was ‘it’ for her. She never looked back. Viki travels the world in search of inspiration. She considers herself blessed to have traveled to many of the mystical sites she had dreamed about as a child. Her travel experiences have been influential in creating her paranormal worlds. When she needs to relax, she calls a friend to meet at their favorite coffee house. When the chattering in her head goes off the charts, she plays one of her favorite RPGs on her PS4 and immerses herself in the world of dragons and magic.

You can email Viki at viki.lyn.romance@gmail.com.