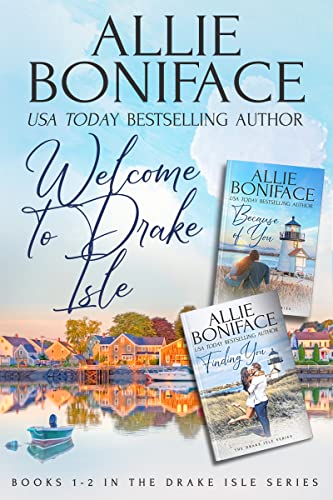 ““Welcome to Drake Isle, where time moves differently, the air feels cleaner, the sun warmer, and the world feels calmer…”

“Emotions are intense and unstoppable. This island is filled with love.”

“I want to live on Drake Isle!”

Because of You (Book One) - Ten years ago, Piper Townsend fell to her death from the top of a fraternity house, and no one on Drake Isle has ever been the same. Blake Carter's fraternity was scandalized. Misterion College closed down. And Blake's girlfriend Emmy fled the island after her best friend died and never looked behind her.

Now Blake's the CEO of a multi-million dollar tech firm looking to relocate to the island. Emmy owns a yoga studio in the building he wants to buy. They haven't spoken in ten years. They're on opposite sides of the bargaining table. But old flames die hard, and sometimes soulmates can set the world on fire all over again…

Finding You (Book Two) - Lillian Santini came to Drake Isle pregnant, broke, and alone.Two decades later she owns a renowned beauty salon and has raised her twins to adulthood. Fiercely independent, she has no interest in settling down. Then she meets Trey.

Trey lives a jet-set life on the mainland, a billionaire who's hidden a shockingly abusive childhood from the world. His best friend, the only person who knew his secrets, died in a tragic accident twelve years earlier. Lil and Trey’s attraction is instant. Their desire is powerful. But can two people from different worlds find love on Drake Isle, or will past secrets tear them apart?

Bonus Story! Deck the Isle is a sweet Christmas story that takes place between Books 1 and 2 and highlights the island decked out at holiday time (along with a few more secrets between characters…)

If you like small town island romance with a hint of mystery, then you’ll love this introduction to the Drake Isle series. Jump in and discover the magic of the island!

“Why don’t we all close our eyes and get started,” Emmy said. Her hands were sweating. The back of her neck was sweating. She blew out a long breath and focused on the back wall of the studio. “Breathe in, hold one second, and breathe out. Again, breathe in...”

She had no idea how she got through the hour. She wished Blake had chosen an Advanced Class, just so she could put him through pigeon pose and a headstand or two. But apparently the basics of Sun Salutation were torture enough. He grunted trying to keep up. Once he stumbled and nearly took out the little girl in front of him. A sheen of sweat appeared on his brow, and in the middle of tree pose, as he was wobbling and reaching for the wall to keep from falling, Emmy could swear he cursed under his breath. She bit the inside of her cheek to keep from laughing. He narrowed his gaze at her. She narrowed hers right back.

Finally the class drew to its ritualistic end. “All right, lie back, extend your arms and legs fully, and let go. Relax your breath. This is Savasana pose, also known as corpse pose, the way we end every yoga class. It is a chance for you to let go of all your efforts and let the effects of your practice sink in.” And a chance for Emmy to gain her composure, because as much as she’d gotten a kick out of watching Blake struggle, she’d also felt a slip of desire more than once.

Those palms, spread wide on the mat, that had once wrapped around her waist.

Those legs, strong calves and thighs, that used to flex while sprinting down the college football field.

That square jaw, the dark hair, the quiet sounds of sleep she used to love to wake up next to.

Stop remembering all that.

Sure. She could stop breathing too, while she was at it.

Emmy summoned them to a seat at the end and chanted the final meditation. As they rolled up their mats and replaced their shoes, she turned on the lights and slipped a waiver onto a clipboard for Blake. Really, she didn’t want his paperwork. She didn’t even want his money. It wasn’t like fifteen dollars was going to make or break her at this point. If he had five thousand dollars he wanted to put out for the class, that would be another story, but he’d made it pretty clear the other day that he was interested in buying the whole building out from under her. For way below its market value, probably.

“Goodbye, thank you, see you soon!” she called as the women walked out. She hoped one of them would stay, even if they made comments about Blake being her boyfriend, but they didn’t. It was as if Bev’s Boutique was having a fire sale they all had to get to. In less than five minutes, she and Blake were alone.

“Well, that was interesting.” He rubbed his shoulder. “That was a beginners’ class?”

“Some of those women are in pretty good shape.”

“They are.” Maybe if she spoke in single syllables and short sentences, he’d get the hint and leave. “Here you go.” She handed him the clipboard.

“Please don’t call me that.”

He swallowed back whatever comment he’d been about to make and glanced at the clipboard instead. He filled in the lines with a few scribbles, pulled out his wallet, and handed over a ten and a five.

“About what? Did you have questions about the class or any of the poses?”

He gave her a look, that look, the one he used to level on her back in school when she was being deliberately unreasonable and they both knew it. “Actually, yeah. That dog one? Where we were supposed to be upside down? I don’t think I was doing it right.”

“Downward Dog?” One corner of her mouth tugged. Don’t laugh at him. Don’t even smile at him. But she couldn’t help it. “You weren’t.”

“I’m serious. My doctor keeps telling me I need to relax. If I can learn yoga, maybe she’ll be happy. My father had already had his first heart attack at my age.”

“Fine. Come over here.” She unrolled her own mat and laid it a few inches from his. “Now watch.” She balanced herself on her hands and feet, straightening her legs and stretching deeply into the pose. She loved Downward Dog. It made her feel grounded and secure, even when nothing else in her life did. “See how my back and my arms are straight? And my head is down?”

He ran one hand along her spine. “Yes.”

She dropped to her knees. “Hey.”

She looked up at him, and there was another look she knew, a look she’d seen a thousand times before. Want. Love. Or something like it. “Don’t look at me like that.”

An eternal moment hung between them, and then Blake leaned over and did just that. 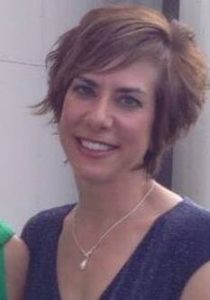 Allie Boniface is the USA Today best-selling author of over a dozen novels, including the Drake Isle, Cocktail Cruise, Hometown Heroes, and Whispering Pines series. Her books are set in small towns and are all about the feels of falling in love.

Allie currently lives in a small town in the beautiful Hudson Valley of New York with her husband. When she isn't teaching high school English, she likes to travel, visit the local shelter and love on the kitties, lose herself in great music, or go for a run and think about her next story. Take some time to browse around Allie's website, check out new and upcoming releases, and sign up for her newsletter.