Tour Kick Off: Released by @JusAccardo 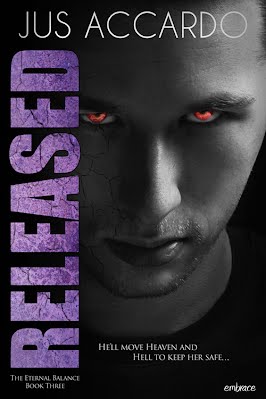 Jax Flynn’s life just went from bad to worse. He was already sharing his body with a demon named Azirak, but after killing its mate… Well, shit got real. Now the demon has taken control of Jax’s body and everything he cares for is at stake, including Samantha, the girl he loves. Yeah, that’s not going to happen. It’s time Jax showed everyone what he was really made of.

Jus Accardo is the author of YA paranormal romance and urban fantasy fiction. A native New Yorker, she lives in the middle of nowhere with her husband, three dogs, and sometimes guard bear, Oswald.  When not writing, Jus can be found volunteering at the local animal shelter or indulging her passion for food.  After being accepted to the Culinary Institute of America, she passed on the spot to pursue a career in writing and has never looked back.  As far as she’s concerned, she has the coolest job on earth—making stuff up for a living.