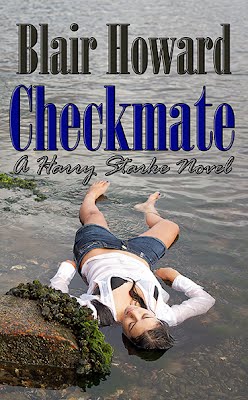 Checkmate is the fourth standalone novel in the Harry Starke series of mysteries.

Angela Hartwell lay dead in the shallow waters beside the golf course. There was not a mark on her, yet she had been strangled. How could that be?
Once again, it’s up to Harry Starke to find out. The investigation takes him into a world he’s very familiar with, a world of affluence, privilege, and corruption.
To solve the mystery, he must deal with three murders, a beautiful used car dealer, her lovely twin sisters, and a crooked banker.  Not to mention Burke and Hare, two crazy repo men who will stop at nothing to protect their employer’s interests. There's also the matter of an ingenious, sadistic killer. But nothing is ever quite what it seems....
Harry Starke is a hard-boiled private detective, an ex-cop, a tough guy from the right side of the tracks with finely tuned senses, good instincts, and friends in high places. He’s single, successful, well educated, and yes, he will hurt you if he needs to.

#1 – Do You See Writing as a Career?
Writing has been my career for more than 30 years. I have published more than 40 books, including 9 novels, and more than 4,500 print and web articles. I still work as a travel journalist for About.com.

#2 – What was the Hardest Part of Your Writing Process?
Procrastination is always been my problem. I tend to put things off, especially writing projects, until the deadline looms large, then I get down to it.

#3 – Did you have any One Person Who Helped You Out with Your Writing Outside of Your Family?
No

#4 – What is next for your writing?
I am presently writing my 5th novel in the Harry Starke series of mysteries, Family Matters, and I’m also fulfilling my commitments as the Golf Travel expert on SAbout.com

#5 – Do you have an addiction to reading as well as writing? If so, what are you currently reading?
I do. I read Sci Fi, mysteries, and historical novels. I am currently reading Blue Ridge, Black Heart by Geraldine Powell. Great book. Interesting female P.I. The book is set in and around Chattanooga, TN, as are my Harry Starke novels.

DESCRIBE Your Book in 1 Tweet: Checkmate. Who killed Angela Hartwell, and why?

#3 – Mashed Potatoes or French Fries? Both, and in large quantities.

#5 – Danielle Steel or Nicholas Sparks? Neither one

Blair Howard is from a small town in England, near Stratford-upon-Avon, on the edge of the English Cotswolds. He is Kentucky Colonel, an honor bestowed upon him in 2008 by the then Governor of the Commonwealth of Kentucky, Steven L. Beshear. Until 2015, he wrote sweeping historical epics, and is the author of five historical novels. In July of 2015 he decided to try his hand at writing mystery novels, thus we have Harry Starke. The first in the series, Harry Starke, was released in mid-September 2015. The second novel, Two for the Money, was released October 19 the same year, Hill House, in mid-December 2015, and Checkmate in February 2016, and there are more to come.
Blair is the author of more than 40 books and more than 4,500 magazine, newspaper, and web articles. His work has appeared in many national and international publications, including Delta's Sky Magazine, PHOTOgraphic magazine, The Mail on Sunday, The Walking Magazine, Petersen's Hunting Magazine, The Boston Herald, The Detroit Free-Press, The Anchorage Times and many more.