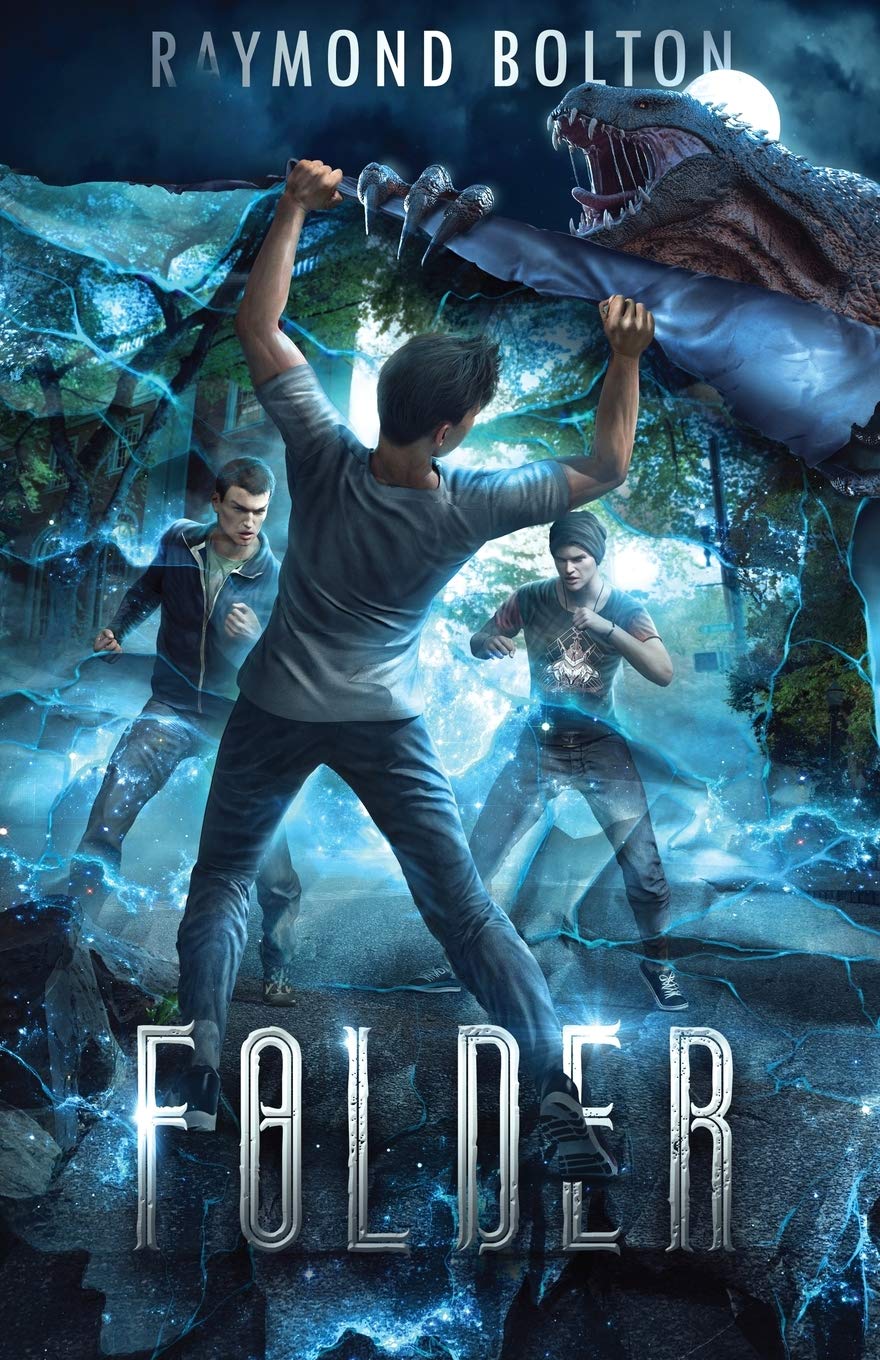 YA Fantasy, YA Sci-fi, Science Fiction

Eric Folder has moved to Oregon to attend Portland State University when an automobile accident leaves him stricken with migraine headaches. The resulting visual effects—something medical professionals term an aura—render him virtually blind and defenseless when a gang of street thugs attacks him. Desperate to see and needing to protect himself, Eric reflexively tears at the luminous lines of light and finds they have become tangible. When he pulls them aside, his present reality folds away with them, leaving him in better circumstances with his enemies vanished. Attempts to fold his way out of subsequent perils leave him in increasingly strange situations until, eventually, his world becomes a nightmare.

“A wild young-adult alternate-worlds adventure that will leave you guessing right up to the end! Fans of Philip Pullman’s His Dark Materials will love this!” - D. J. Butler, author of Witchy Eye

“A big, engaging ride across our infinite possibilities - and our choice to be heroes.” - Anthony Dobranski, author of The Demon in Business Class 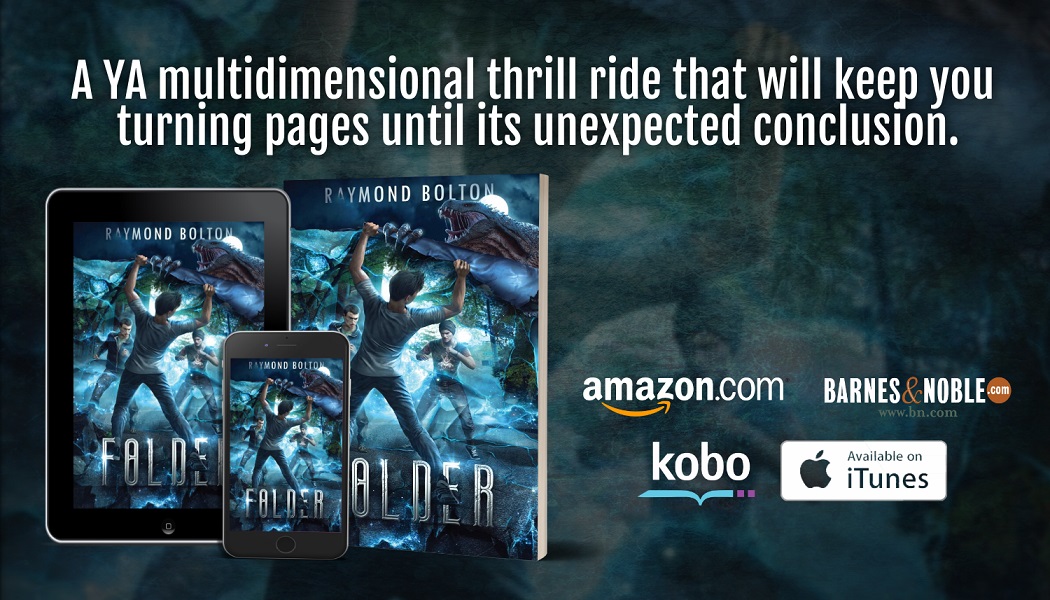 I don’t know if I should laugh or cry when I say this, because I sound as if I’m repeating words from a hymn or I’m in need of a compass, or else I’ve given up completely. The thing is, I’m terrified because all these things are true and I don’t know how to fix them. I would say a prayer if I thought someone could hear, but even if they did, I don’t think this is a place where prayers get answered. If I had a compass, knowing whether I’m facing North or South wouldn’t take me away from this place, let alone back to where I started. In fact, no one can get me out of the mess I’m in, except maybe me, and I’m as scared to try to change what has brought me here as I am afraid do nothing.

I remember when my friends and I were kids and we hid in the bushes and pretended there were monsters coming after us. Well, now the monsters are real. I’ve been listening for what seems an eternity to their angry snorts and the clatter and scratches of their claws on the large stone surface where those creatures are gathered. Every now and then, one of them hisses and another does the same in response. The rate of their footsteps escalates and I imagine two of them colliding and squaring off in an expression of indignation. It’s too dark to see whether this has actually happened, or if it’s just my imagination, but the pounding of my heart in face of the impending danger keeps me riveted on what’s happening.

As I hide in a clump of bushes and the minutes pass, I’m more than a little relieved that they’re taking so long to find me. Unexpectedly, the full moon peeks through a break in the cloud cover and the scales on the bodies of several great beasts glisten. Each is twice the size of a bullmastiff and I count six of them several yards from here. Their eyes glow whitish gold and appear to have vertical slits, although it’s hard to be sure at this distance. As they circle a spot where I was standing a short while ago, sniffing the ground in several directions around it, one of them raises its head and opens its mouth, baring rows of long, needlelike teeth. I expect the creature will howl. Instead, a rasping reptilian sound emerges and I shudder, wondering what kind of beings they are.

Although I’ve recently arrived, from my earlier experiences and the landscape’s layout, I recognize this place as being near where the street car used to stop in a time that’s lost to me forever. The place where I’m hiding used to be the parkway where Park crosses Mill—or what used to be Park and Mill before everything transformed into this new reality. There aren’t any streets anymore and I’m surprised there are even deer trails to mark where Park and Mill once intersected. This used to be Portland State University, but now everything’s grown over and forested. The clock tower has vanished, as have the student union and the rest of the buildings that were part of the campus.

Without warning, a thought bubbles up from a world I’ll never see again and I almost cry out loud. Cursing this lack of control, I force my idiot self to keep quiet. Still, there is some truth to the thought that this situation is what Dad would have called a mixed blessing. It’s because it rained so hard that those things haven’t discovered me already. Here I am, kneeling on a thick bed of leaves. If they weren’t so soggy, they would crackle each time I move and announce my location. Instead, their wetness muffles whatever noise I might otherwise make. On the other hand, because the night is so cold and water is starting to soak through my pants, I’m beginning to shiver and I’m afraid I might sneeze any minute. If I do, those creatures will certainly hear and I know I will die because I’m sure they can out-run me.

The breeze that’s been chilling me starts to increase and I wonder if another storm is building. The last of autumn’s leaves whip though the air and there is a sharp crack above me. The creatures turn in my direction and two cock their heads. A third one starts walking toward me and I hold my breath, wondering whether it will continue to advance, when a second crack drops a large bough into the bushes a few yards to my right. The creatures stop and stare at the spot where it landed. Then, apparently satisfied they understand what caused the disturbance, they resume their search in the original location. Realizing I’ve been holding my breath and that I need to breathe, I inhale deeply, then exhale. My breathing is starting to grow normal when something grabs my shoulder. 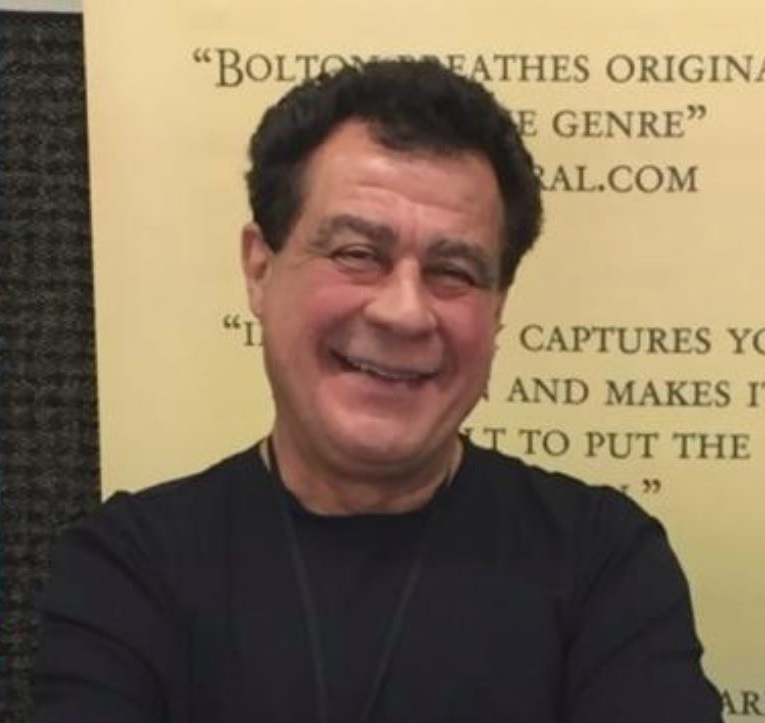 Raymond Bolton lives near Portland, Oregon with his wife, Toni, and their cats, Max and Arthur. His epic fantasies are published by WordFire Press, publisher of the Dune and Star Wars novels, and have received endorsements by the late Mike Resnick and award-winning author Paul Kane.