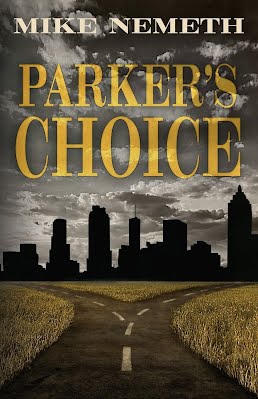 Framed for murder and on-the-run an innocent man is forced to become an outlaw. Hiding from his troubled past in Atlanta, Parker can’t escape his enemies. His former business partner blackmails him and when she’s killed, Parker becomes the chief suspect, but he fears his wife did it. His boss coerces him to commit fraud, but he and his clever colleague, Sabrina, uncover evidence that his elusive birth father is involved in the scheme and Parker’s innate moral code is stressed to the limit. Parker must solve a riddle within a quandary within a puzzle within a mystery to save the lives of those he loves. 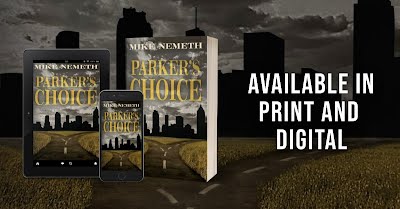 Parker watched her on the doorbell camera on his phone. It shouldn’t have to end this way; his future shouldn’t depend on the risky odds that he was right about what would happen tonight. He weaved around over-sized furniture and peered through the small square window in his front door. She wore a red, V-neck sundress exposing two inches of cleavage, reminding Parker once again that this woman’s sexual magnetism radiated like heat waves off a blacktop road. Her body an eye-catching confluence of tanned, sweeping curves, her hair long and blonde, and her eyes sapphire blue, she was a woman in her prime who Parker knew enjoyed the attention of men of all ages. He wiped his sweaty palms on his shorts and opened the door. On-time and all smiles, Meredith walked into his arms as though she were his lover arriving for a romantic evening.

Awkwardly, Parker extricated himself from her embrace. He led her to the dining room in his cramped beach bungalow where the papers to dissolve their partnership in Advanced Fraud Analytics, LLC were laid out on the table.

“You surprised me by agreeing to this,” he said.

She shook her head, and her long hair flew off one shoulder and onto the other. “Time to get off the investor-schmoozing merry-go-round and kill our ‘baby.’”

“Sad it’s come to this, but it’s a good deal for you. You’re relieved of all company debts and obligations and indemnified against any lawsuits; in return, I retain full ownership of the fraud detection algorithms and computer programs. Okay?”

She tapped the stack of papers with her ruby nails but did not take a seat. “Let’s do this outside. It’s such a lovely evening.”

Outside, Parker knew he would lose a measure of control, but he had planned for this situation. He swept up the legal documents and carried them to the pebbled glass table in his lanai. Five feet beyond the wall of screens, a swimming pool filled the backyard that ended in a gentle slope to the Intracoastal Waterway. A wooden shed, in which his center-console boat sat in a lift sling, flanked his rickety dock and to the right of the pool a large, four-person hot tub squatted on a slab, shielded from his neighbor’s sight by thick hibiscus. The sun was a dying ember on the horizon, so Parker turned on the underwater pool lights. It wasn’t a romantic gesture; he wanted a little indirect lighting.

“Do you have any wine, Parker? May as well make this pleasant.”

He hesitated; he had no weapons in the house. “White or red?”

He nodded. “You can read the documents while I’m pouring the wine.”

When he returned to the patio with a chilled glass of Chablis and a sweating bottle of Tecate, he found Meredith standing at the edge of the pool with her naked back to him. She stepped out of red thong panties and flipped them with her foot onto the Cool Crete surface surrounding the pool where her outer garments and lacy bra were strewn in disarray. Naked, she grinned at him over her shoulder. He returned her smile as he admired the perfect contours of her high ass and the smooth tapering of her legs.

If he didn’t suspect that she wanted him in the water so he’d be less mobile, Parker would have been tempted to join her. He squatted at the edge of the pool and extended the glass of wine to her. He couldn’t resist watching her wade toward him, her breasts parting the rippled water like the prow of a ship plowing through ocean waves. She gave him permission with her eyes, but she couldn’t resist a quick glance over her shoulder at the bottom of his property where it met an inlet off the Intracoastal Waterway. He followed her gaze and saw it then, a white Boston Whaler silently drifting up to his dock. He had thought the odds would be in his favor, and now they weren’t. She noted the look of recognition on his face and made a grab for her purse at the edge of the pool, but Parker was quicker. He snatched the unusually heavy bag and tossed it into the deep end of the pool. Then he kicked her clothes into the water.

Shrieking, “Help! Rape!” Meredith climbed out of the pool and dashed into the house.

A rangy man in military fatigues, wielding a double-barrel shotgun as though it were a natural extension of his hand, leapt onto the dock and advanced toward Parker.

“Get the fuck off my property,” Parker snarled.

The man raised the shotgun with one hand as Parker ducked to evade the blast that shattered the sliding glass doors at the back of the house. Bent at the waist, Parker hustled into the protective shadows at the side of his house. Cowering behind his hot tub, he watched the man slowly approach in a stealthy semi-crouch, like a big game hunter stalking his prey. The terror Parker felt was what an antelope feels when it is about to be eaten alive by a pride of hungry lions. Now would be good time to rescue me.

When the hunter reached the hot tub and crept around the far side, Parker shuffledclockwise to remain on the opposite side. He took shallow breaths through his nose to mask the sound of his breathing as he listened to the blood coursing through his carotid artery—whoosh, whoosh. Where is she?

When they had made half a turn around the hot tub, and the predator’s back was to the boathouse where she had been hiding, he saw her emerge in the crepuscular light, fifteen feet away on his dock, and assume the shooter’s stance she’d been taught at the gun range. She never said a word, gave the hunter no warning, just fired her compact Beretta once, and the man crumpled onto the Cool Crete surface with a thud and a rush of expelled air. That hadn’t been the plan. She was only supposed to balance the threat Parker suspected Meredith had posed. She wasn’t supposed to shoot anyone. But Meredith had out-schemed him. It’s so easy to get these things wrong.

A scan of the house’s back windows revealed no sign of Meredith. Parker motioned for the woman to hurry into the shadows and put a finger to his lips—don’t talk. The wounded man moaned softly, and Parker’s quick glance confirmed that he was semi-conscious and neither moving nor watching. Parker took the woman’s pistol and shoved her toward the neighbor’s property. The snowbirds who owned the place were away enjoying the Canadian summer during the Florida off-season.

Mike Nemeth is an Army vet and former high tech executive who lives in suburban Atlanta with his wife, Angie and their rescue dig, Scout. He is the author of the Amazon bestselling and award-winning novels "Defiled" and "The Undiscovered Country." Creative Loafing Atlanta named him Best Local Author for 2019.